The Husky 701 is already a pretty capable bike, but it needs some modifications to turn it into a real off road travel machine. Check out the modifications we have done prior to leaving on our 5 years RTW adventure.

Traveling through Africa sometimes requires you to fill up with leaded petrol. Getting rid of the catalytic converter was on our top list of bike modifications. We got these titanium ultralight slip on mufflers made by Jens from JSV racing. A great piece of work, a nice rumbling sound, a lot of weight savings and a pretty sleek look. What more could we ask for!

Apart from a loose bolt on the ring fixing the muffler on the exhaust, we have had 0 issues with it so far. 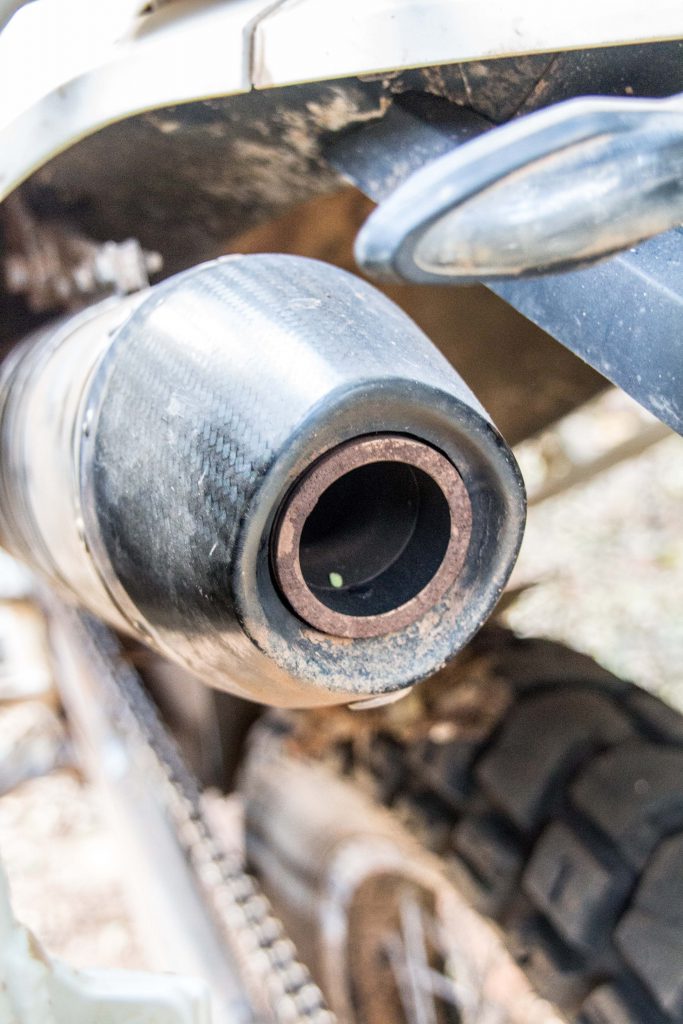 Long range tanks for the bikes were fabbed by Mike from Bikers Warehouse in Jo’burg, South Africa. It was a prototype and had some weaknesses in the beginning. The sturdy mounting to the sides of the bikes made the engine vibrations cracking the tanks. Mike was so kind to rethink the mounting system and shipped rubber parts to go with the tanks. They held up fine since over 20.000 kms now. 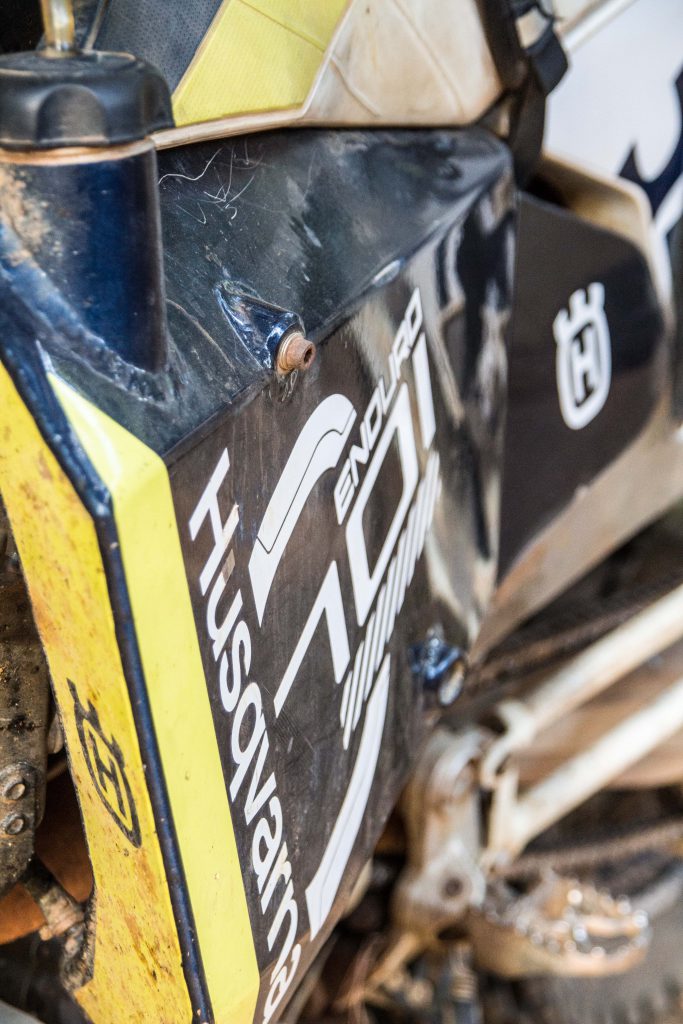 Either side of the bike carries and extra 5L of petrol, which brings the total capacity to 23L on the Husky. We added another 2.5L emergency tank to the skidplate (Rallye Raid Products) which results in a total petrol  capacity of 25+L, enough for a range of over 500 kms. 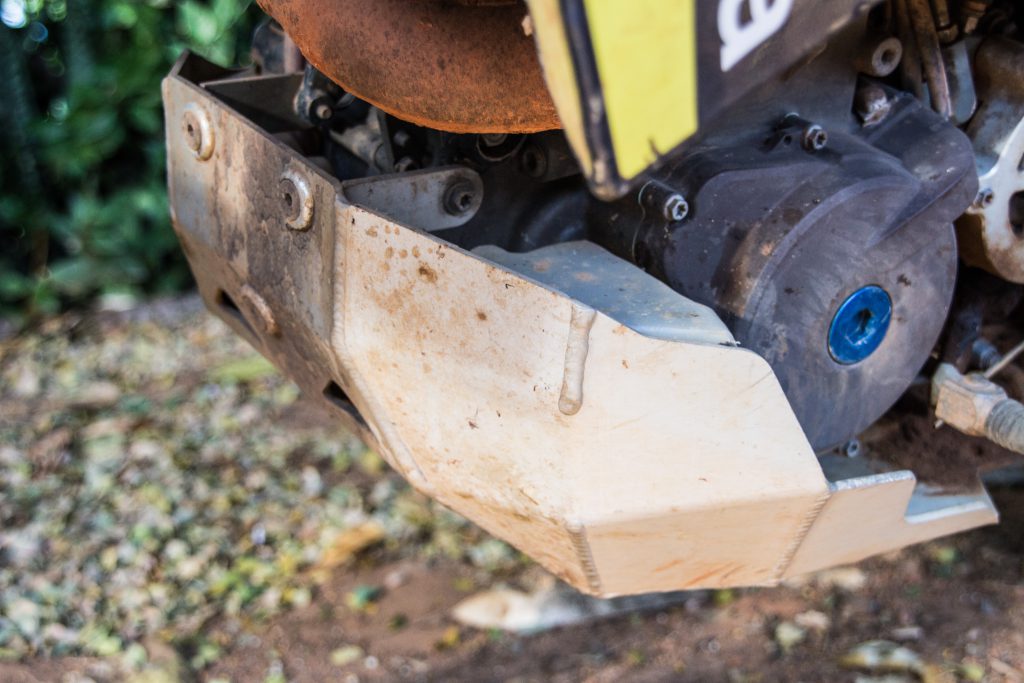 Another 2.5 L tank in the skidplate

It won’t be surprising that dirty petrol is all over Africa. The Huskies are pretty sensitive to dirt in the fuelling system and the original ultrafine in line filter is pretty small and should be replaced quite often in these conditions. That’s why we added an extra washable inline filter from Rallye Raid Products.

28 kkm:                filter was cleaned after being completely clogged. The injection didn’t suffer at all so the filter worked just fine.

The original rear subframe bolts are not made with the extra luggage in mind. High tension steel bolts from Rallye Raid Products have been holding up fine so far, despite the bad corrugations, the crashes and the heavy load on the rear of the bike.

There was no windscreen solution on the market for this specific bike model. Luckily the Cee Baileys windscreen for the Honda XR650L seems to fit the front of the bike just fine. With some Chinese threaded alu bushings from Aliexpress, (2x 45mm, 2x40mm) and some nylon washers, it fits the bike pretty well.

As it goes with windscreens and crashes, we finally both cracked them when dropping the bike. While we were concerned about wind protection at first, we now got used to riding without it and wouldn’t consider these as an essential add-on anymore. After all, they come in at a pretty hefty price!

We know there is the everlasting discussion about soft vs hard luggage. Having the comfort of securely locking the panniers and being able to leave the bikes without having to worry too much, gave us peace of mind. I think soft luggage might be a little too inviting for the poor people here in Africa. The panniers carried all our stuff, including laptops and electronics, safely. After a few crashes, the panniers are dented, but still fully functional and water tight.

There is no standard pannier rack available for the Huskies, but Piet from Touratech Belgium was so kind to modify 2 KTM 690 enduro racks for us and they held up just fine so far. There isn’t a lot of difference between the KTM and the Husky, but the bolts on the rear subframe are located slightly different. A bit of welding and powdercoating it all in the right color, worked miracles! 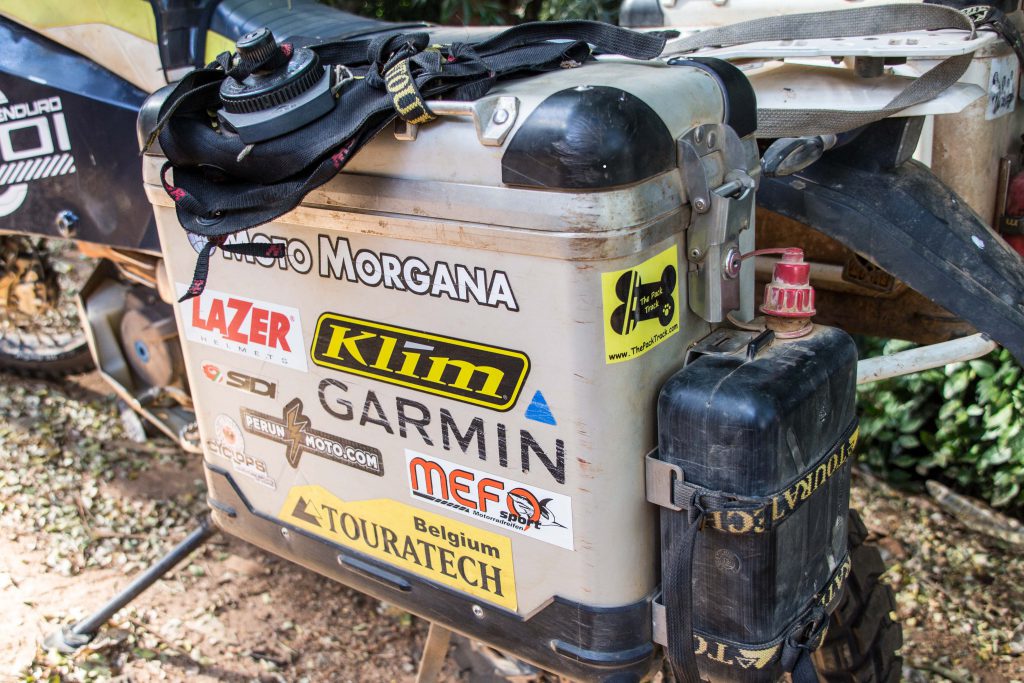 Tyres on long distance trips are always a compromise. Sure we prefer riding knobblies in the dirt, but they don’t last long enough. I once left with reputably very long lasting Michelin Desert on a trip to Namibia, and it was toast after 4500 kms. TKC80’s lasted about 4kkms of mixed use and are pretty prone to punctures. These distances are just not enough on a trip like this. Remember tyres are very hard to find in Africa and shipping them costs. Read all about that here.

We opted for a set of Mefo Super Explorer tyres. They are a very good compromise on every surface: road, gravel, sand, mud. Sure, there are tyres that handle each single one of these surfaces better, but we have yet to see a better, extremely long lasting, all-rounder. When taking the limitations of the tyres into account, they are just bloody fantastic. They will take you to the remotest of places and are extremely puncture resistant. 2 flats for both bikes over a 20kkm distance seems pretty hard to believe! 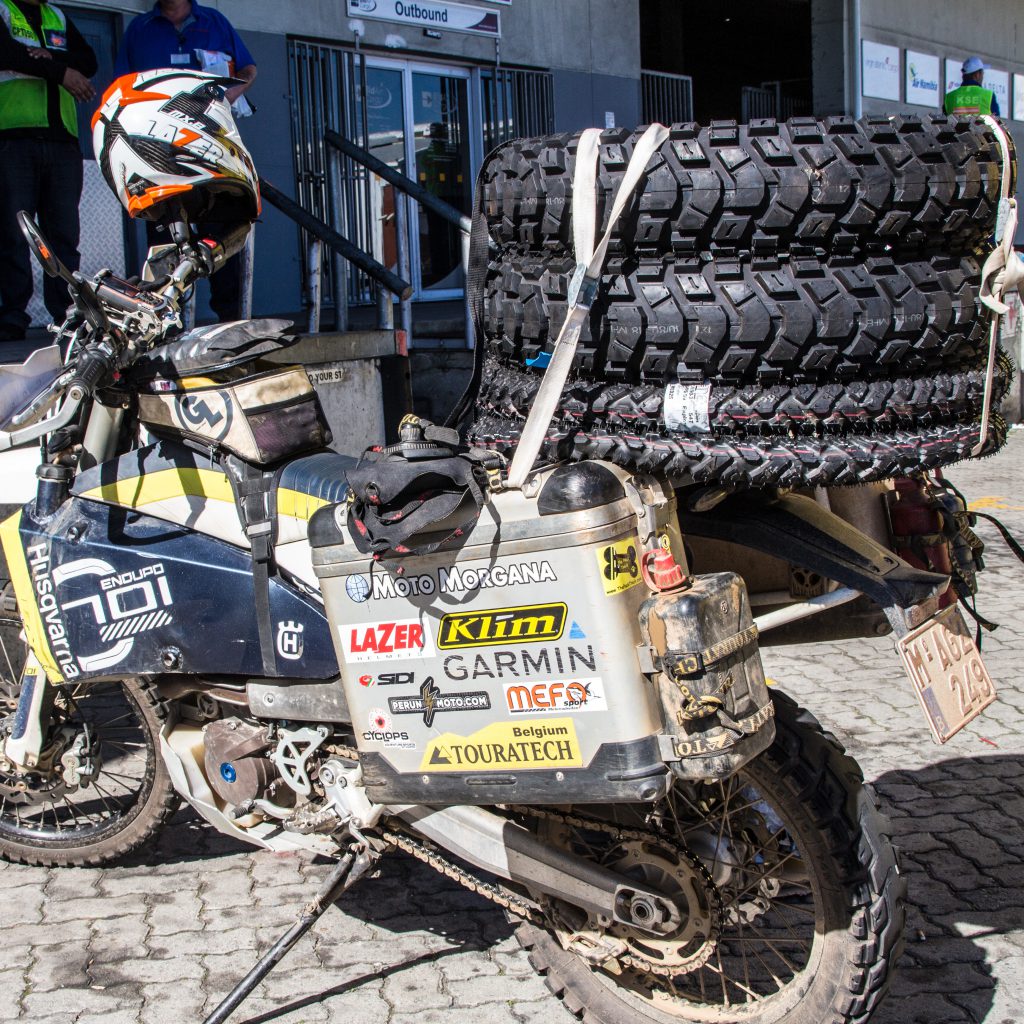 Picking up 2 sets of MEFO’s in Cape Town airport

We have been riding most of our trips over the last few years with a Garmin GPSMAP 6x series device and were extremely pleased with them. They are very multifunctional and are real allrounders. Watertight, shock resistant, fits in your pocket, works on batteries, extremely reliable and extremely feature rich. Whether you mount it on the handlebars, go for a hike or take it on a bout: it is just bomb proof!  Working from 2 AA cell batteries gives you plenty of options even in the most remotest of locations. They nicely go with all the other AA battery electronics we have. Furthermore, they do charge straight from the bike. The lockable cradle is from Touratech. 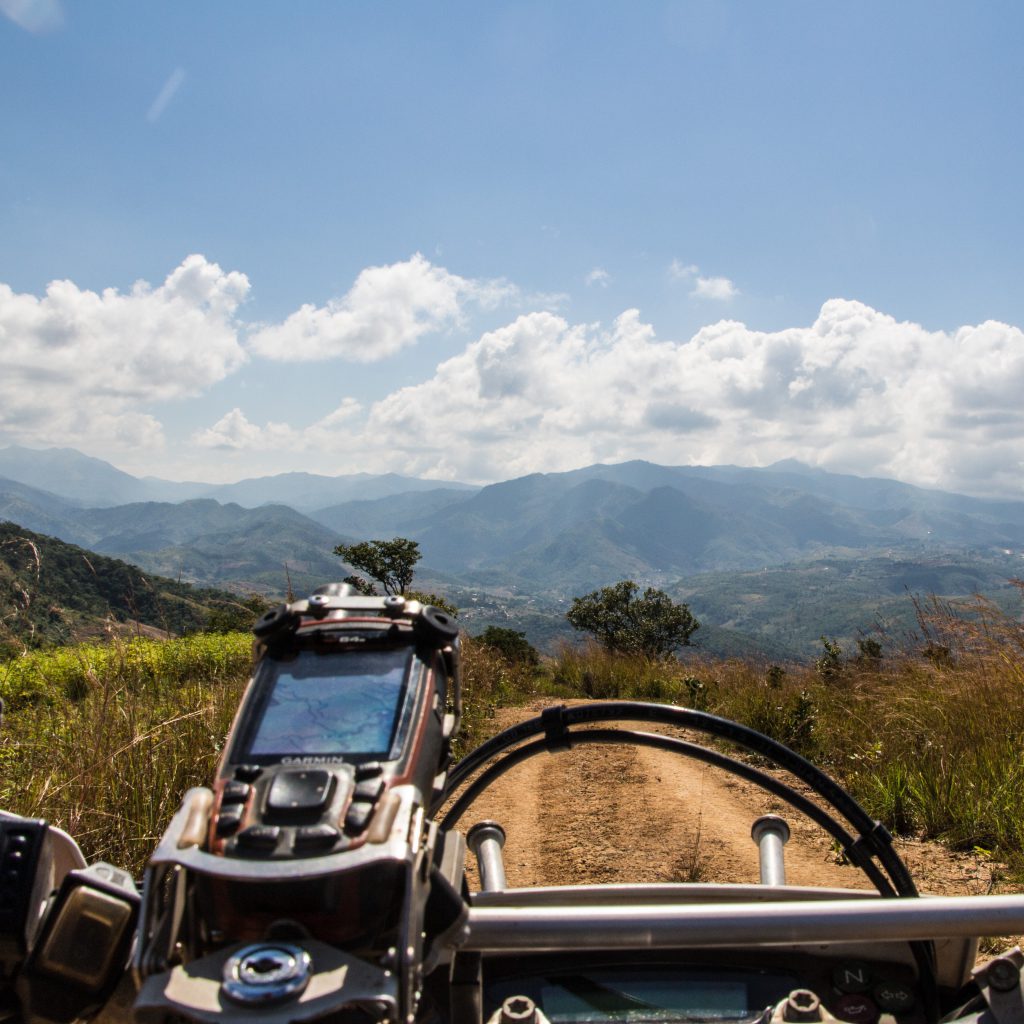 Sturdily mounted on the handlebars, this GPS has never let us down

17 kkm: the charging cable on the bike gave up. Wez are now charging the batteries separately. Not a major issue.