Adventure traveling, it sounds appealing to many. Escaping from the daily life, leaving luxury and comfort behind and getting back to basics. Exciting! The idea seemed to attract me too: not having to think about my haircut, the height of my heels or the matching accessories.

When I met Tom I soon realised that from that moment my life would be just a tad more adventurous. It didn’t take long before we started planning our first trip and shortly after that we were riding all the way from Brussels to the South of Jordan, each on our own bike. Needless to say Greece, Turkey, Syria and Jordan are just plain hot, dry, sandy and dusty in summertime.

That’s where the first problem arised. I used to wear contacts since many years, especially because glasses made me look quite stern (as a teacher I especially preferred not to) but also because glasses just meant such a hassle. On the bike they were just dreadful because we had MX style helmets with goggles. In general helmets and glasses just aren’t a good match. So contacts seemed to be the best solution… until we reached those areas where sand and dust were… well … about everywhere! I lost track of how many times I rubbed my eyes because sand got caught behind the contacts. I must have cursed a zillion times when another contact popped out of my eye because of the many tears that were supposed to get only the dust out. I can’t remember how many contacts I lost because my lens case fell on the ground, again and again! Something had to change!

After our decision to make this major trip, we pretty soon decided eye surgery was the next big step. Tom had it done years before and he was so enthusiastic about it. I must admit however that the idea of someone fiddling with my eyes gave me the creeps. But still Lasik laser surgery seemed the ultimate solution to my ‘problem’. 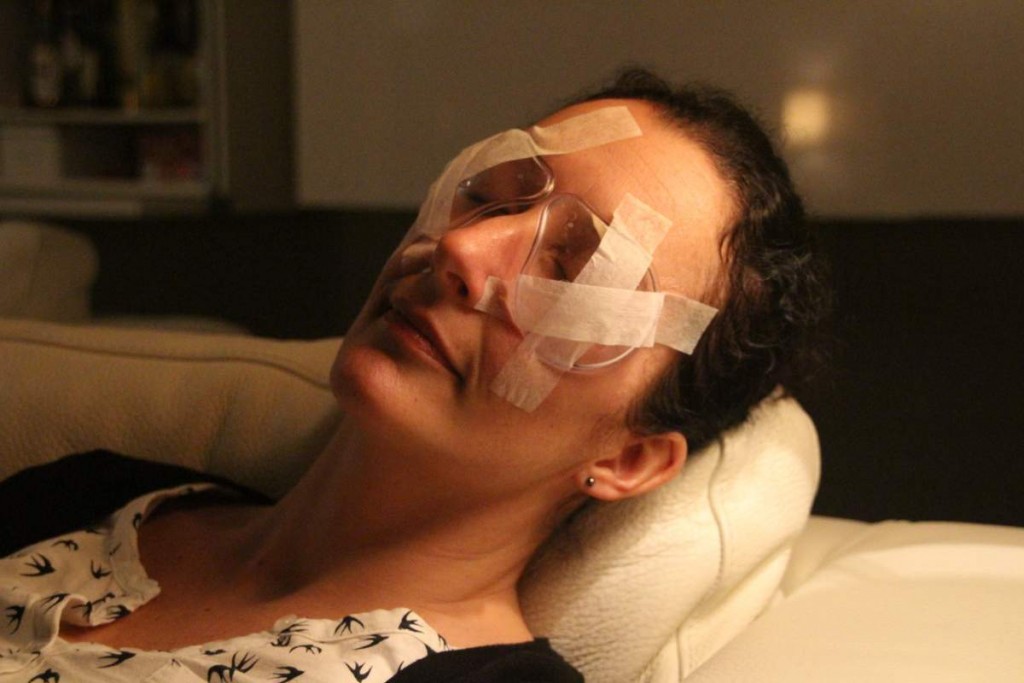 Right after surgery, with my eye shells

We got in touch with the Eye Clinic in Deurne, Antwerp. I met Dr. D’heer and his team and to be honest, I don’t think I was the first patient to be suspicious, as during this first meeting I was quickly and professionally put at ease. I would hardly feel anything so he said and chances were extremely low something could actually go wrong. A few tests later, I was told my eyes were perfectly fit for the surgery. I was delighted as I walked back to my car….

The operation was planned a few weeks ahead. I meticulously followed Dr. D’Heers instructions: no more contacts during the last days prior to surgery and moisturising my eyes 4 times a day. I little sedative pill was included in the package, just to calm me down a little bit on the day of surgery.

I heard all sorts of noises, from the scraping of my cornea to the sound of the lasers cutting away particles of my lens. I even sensed the smell of a summer barbecue. Step by step the doc explained what he was doing and I can tell you, that reassured me a whole lot!  The operation itself only took a mere 15 minutes and I had instant perfect vision right after. What the hell had I been worrying about? Why had I been waiting and doubting for so long?

My eyes were covered by a pair of sexy eye shells and that’s how I left the hospital. During the first few hours after surgery I was supposed to sleep a bit. That little sedative pill was still working so I pretty soon fell asleep after getting home. But I also understood why I had to wear those funny shells: my eyes were itching like crazy. I think that without them I would just have rubbed my eyes out. Luckily the itchy feeling soon disappeared and as I awoke, I felt just great. And most importantly: my vision was crystal clear!

During the weeks after surgery Dr. D’Heer closely monitored the healing process and the result couldn’t have been any better. Up until today I can tell anyone Lasik surgery was one of my best decisions ever!