The first stop in Ghana is Mole National Park in the north of the country. If you want to spot elephants then this is the place to be so we were told more than once along the road. And elephants we saw, that much is true. After a mere 15 minute walk into the forest, our guide took us to a group of 7 wild elephants. There were plenty of warnings to keep atleast a 50 m distance, but when Tom tries to take some pictures, the guide encourages me to get even closer. That massive animal at a mere 30 m away: I wasn’t really at ease so to say the least. The guide was laughing his arse off though… 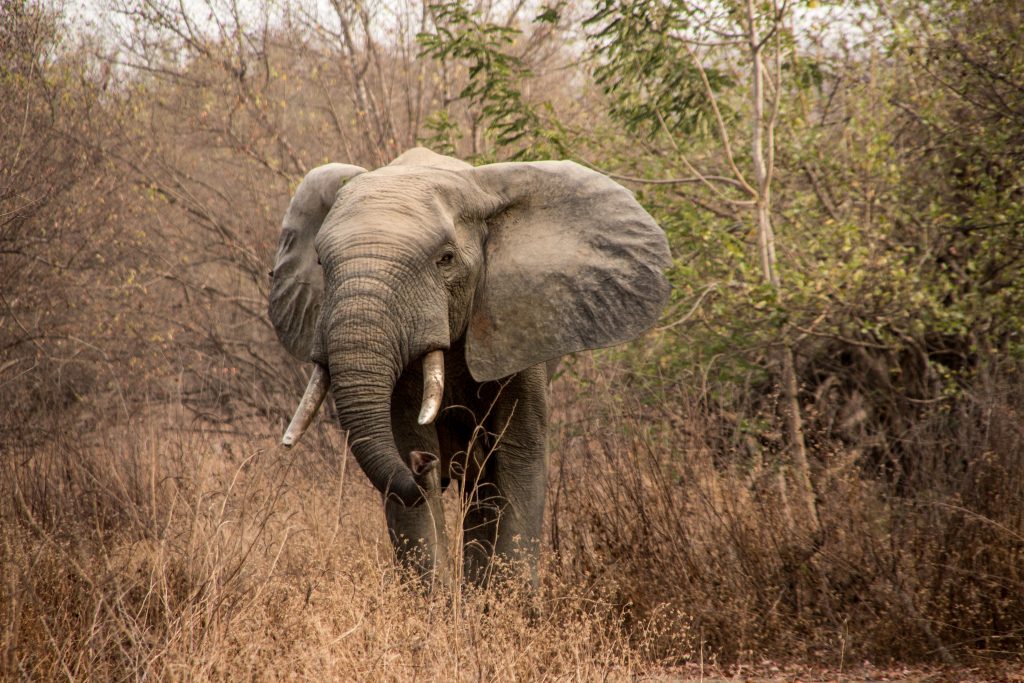 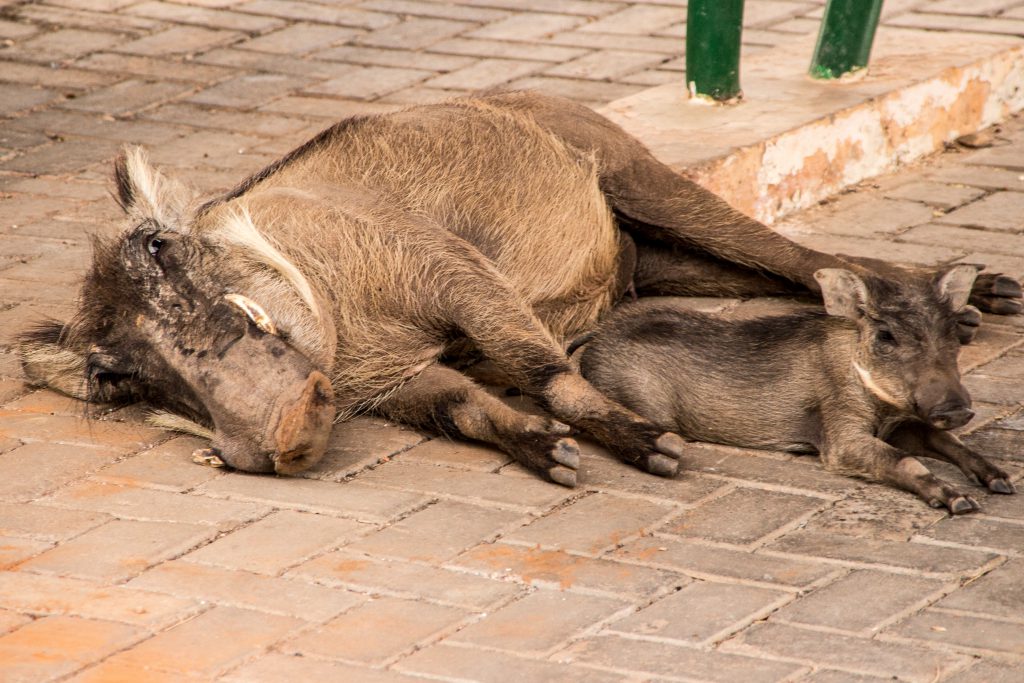 Warthogs on the parking lot

Next up are the Kintampo waterfalls. Nice but not really that amazingly impressive. Or are we getting a bit spoiled maybe? Is it getting harder to impress us? The plan is to camp at the crater lake of Bosumtwi, just outside Kumasi. We are preparing for an easy ride, but a stubborn VISA card and a crap ATM network means a 2 hour delay during rush hour in the center of Kumasi. We are blinded by the dust and the black smoke of the old cars and lose quite a bit of time. But Tom seems to know a shortcut to the lake. Well… shortcut… It appears to be a piste that was washed away by the rain and quite hard to ride in the dark. On top of that it suddenly stops. There is only a very steep rocky slope in between us and our final destination of that day.

We see lightning in the distance and it doesn’t take long before we hear the rumbling thunder. The wind is also getting pretty fierce. Heading back in the dark just doesn’t seem a good idea, so we stop at the first small village where some super friendly family takes us in and offers us water and a place to sleep. What more could we have wished for? It doesn’t take long before we see a terrible downpour flood the entire village… The next morning we take a different road and finally make it to the lake. The refreshing dive after these hot and humid days on the bikes is just divine. 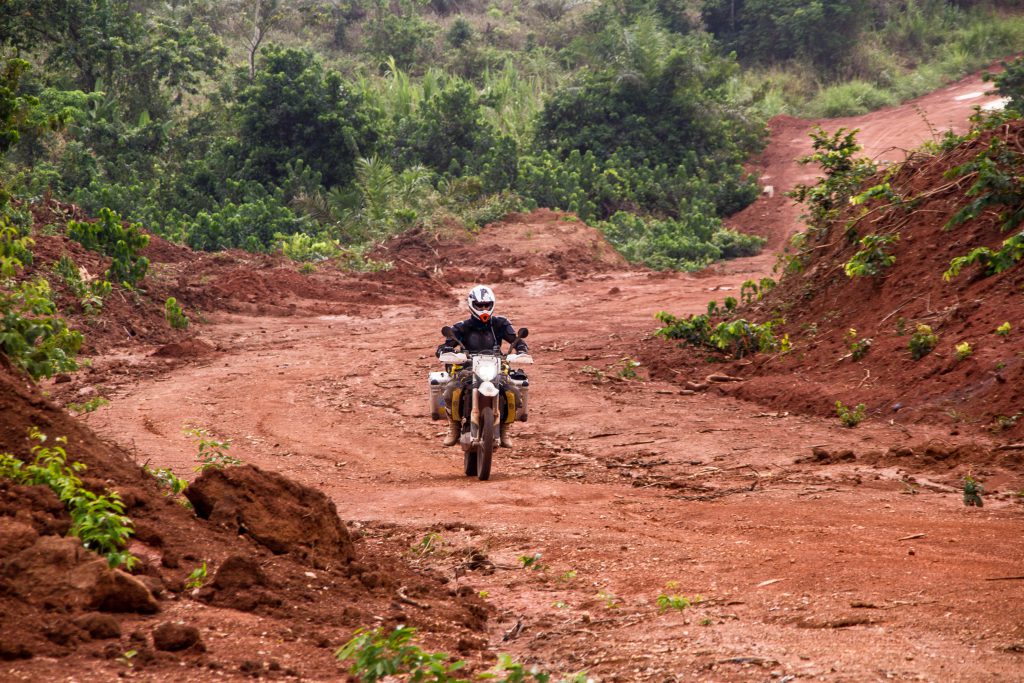 Tom on the piste to Bosumtwi Lake, the next day…. 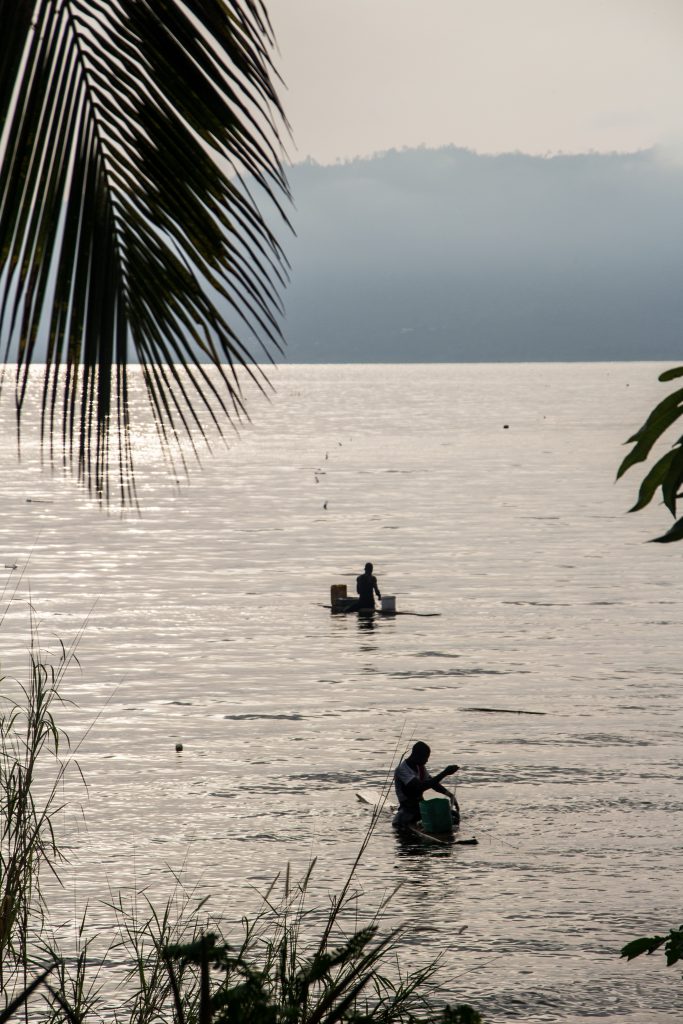 We decide to let go on the crowded, touristic and expensive coastal area of Ghana. Instead we are heading further east over the piste right under lake Volta. And again it all appears to be just that little tad more challenging  so we can’t but rely on the Ghanaian hospitality once more. Storm is coming again and pitching the tent is not an option. Luckily the staff of a local medical post has a spare room that we can use for the night.

The medical facility monitors pregnant women in this little remote village. The lack of means and equipment makes it all a bit different than back home. In case of an emergency, pregnant women go on the back of a moped, over the bumpy piste to the nearest town about 80 kms further. There’s no cars here, no ambulance. Exactly those potholes and bumps kind of exhausted us that very same afternoon. Unbelievable! 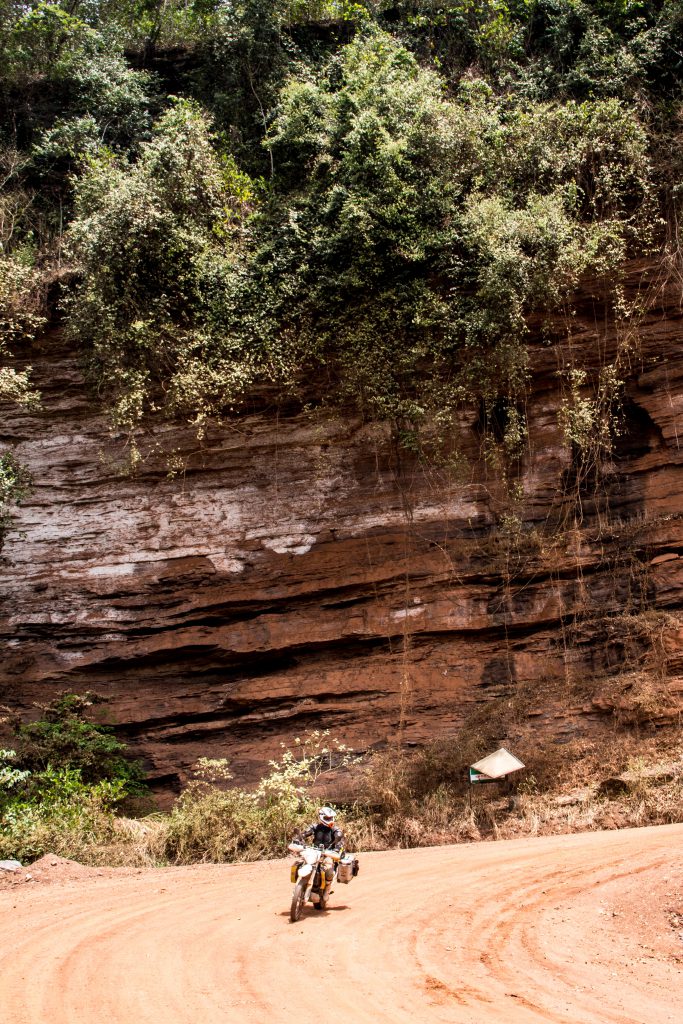 Tom on a nice stretch of piste 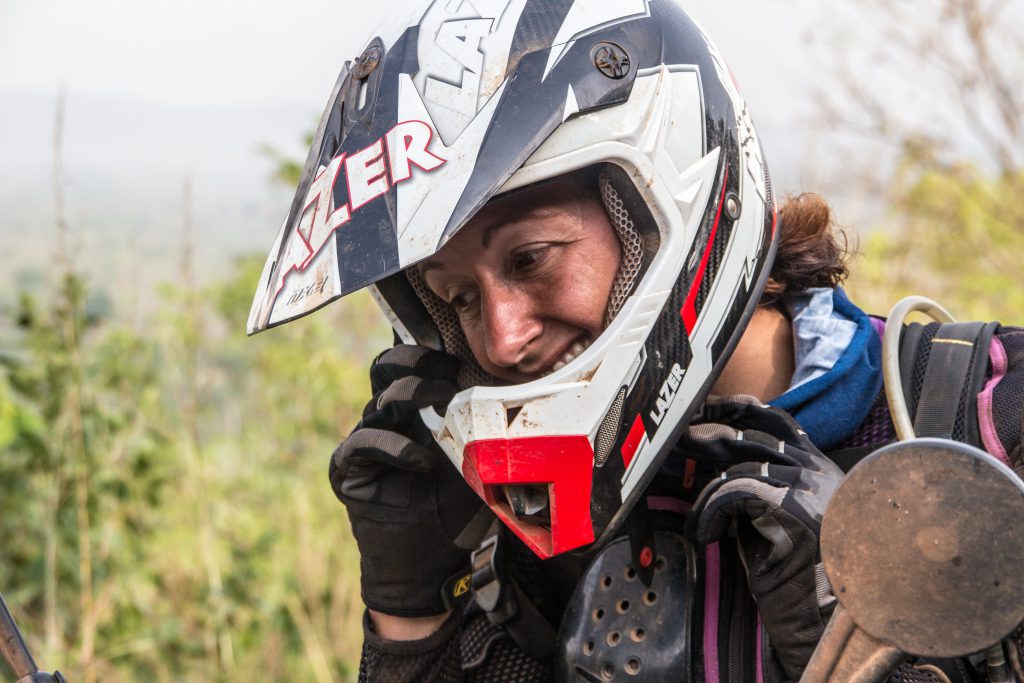 Insects in my ears again!

The next day it takes us a few hours to finally hit the tarred road, but we wouldn’t really call it a nice flat surface either. We zigzag in between the huge potholes and try  to avoid the cars and trucks which appears to be a real struggle sometimes. Wishing for unmaintained Ghanaian asphalt after the bumpy piste? Bad idea… But we make it to Wli, a small border checkpoint just before Togo. There’s stormy weather ahead again, so we end up in a nice, clean room for little money with an excellent matrass! The food is delicious and the nights are surprisingly quiet. We haven’t had such a great night sleep since very long! 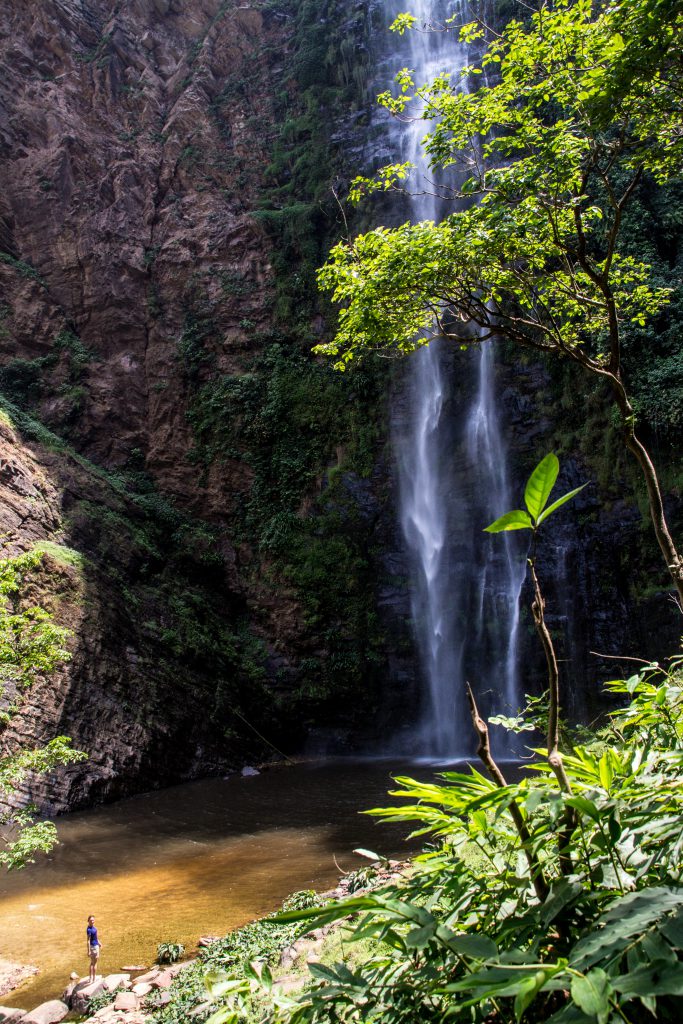 Me at the Wli waterfalls 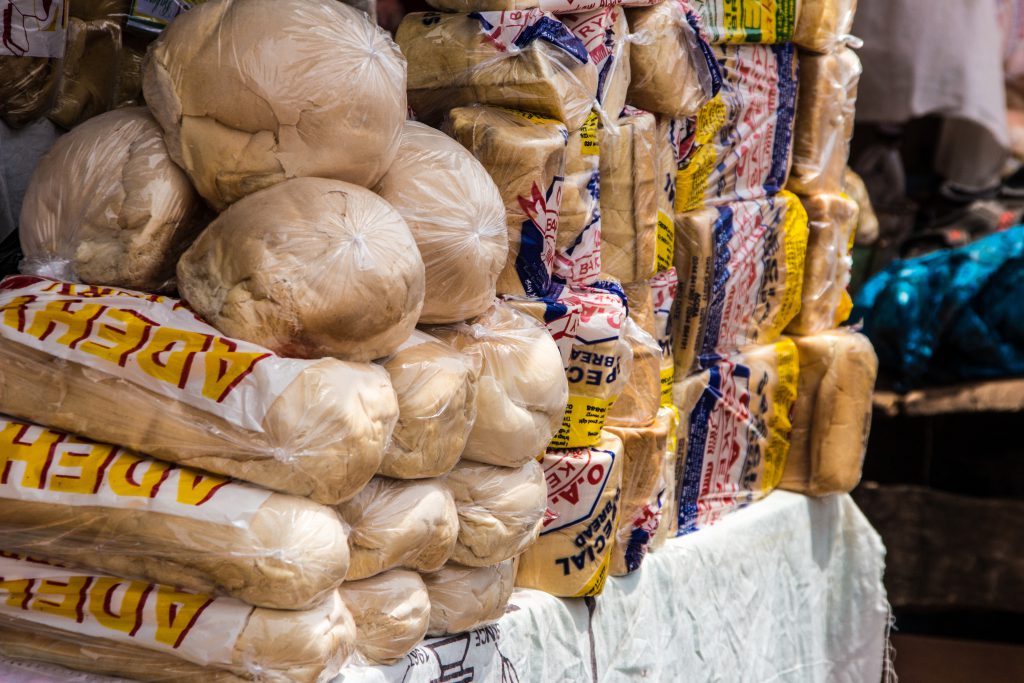 The only reason we will be glad to leave Ghana: awful bread! 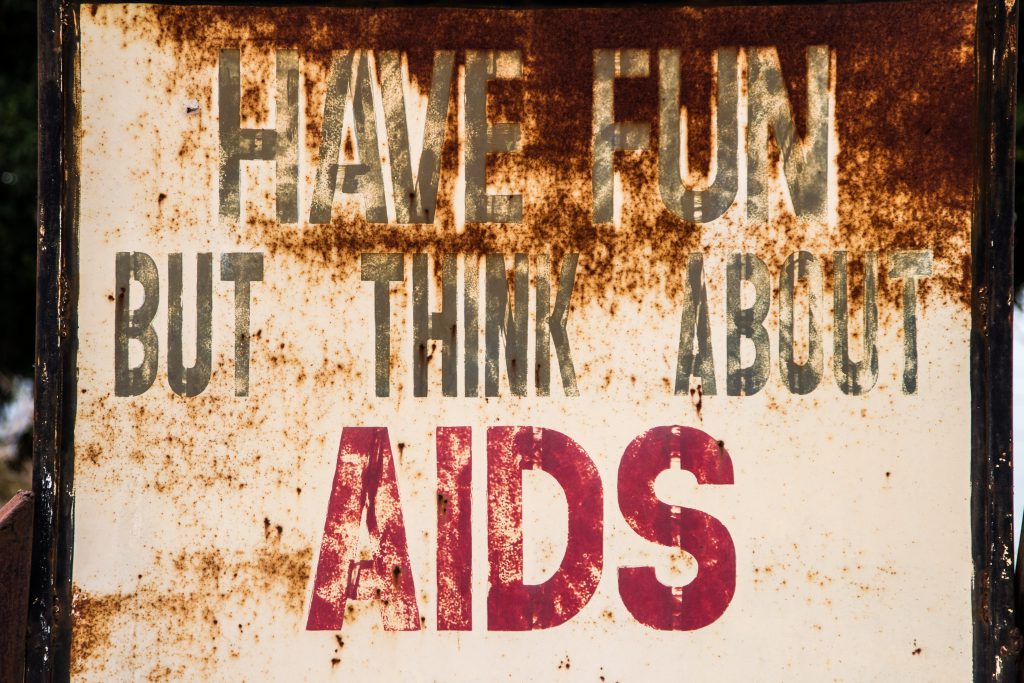