Potosi, that is the mine and nothing but the mine. The kitschy, brightly colored led strips along the edges of the historical buildings do match the many cheap, low quality pizzeria’s in the city centre. The usually overly tasteful Italian specialty couldn’t have turned us down more. So booking a tour with an old mine worker was what we did and that experience literally blew us away! The miserable working conditions of the – often as young as 14 years old – workers, the short life expectancy due to pneumoconiosis and metal poisoning and the ramshackle installations and constructions down in the shaft… It’s a shocking reality here. We bought a few presents for the miners at work: a bottle of 90% alcohol, some chemically orange colored oversweet lemonade, a big bag of coca leaves and a bar of dynamite. Well, the latter ended up in the hands of our guide that cheerfully set the fuse on fire, just for fun! Never in my life did I hear and feel such a bang. It made my whole body tremble. Those Bolivian miners are just insane! 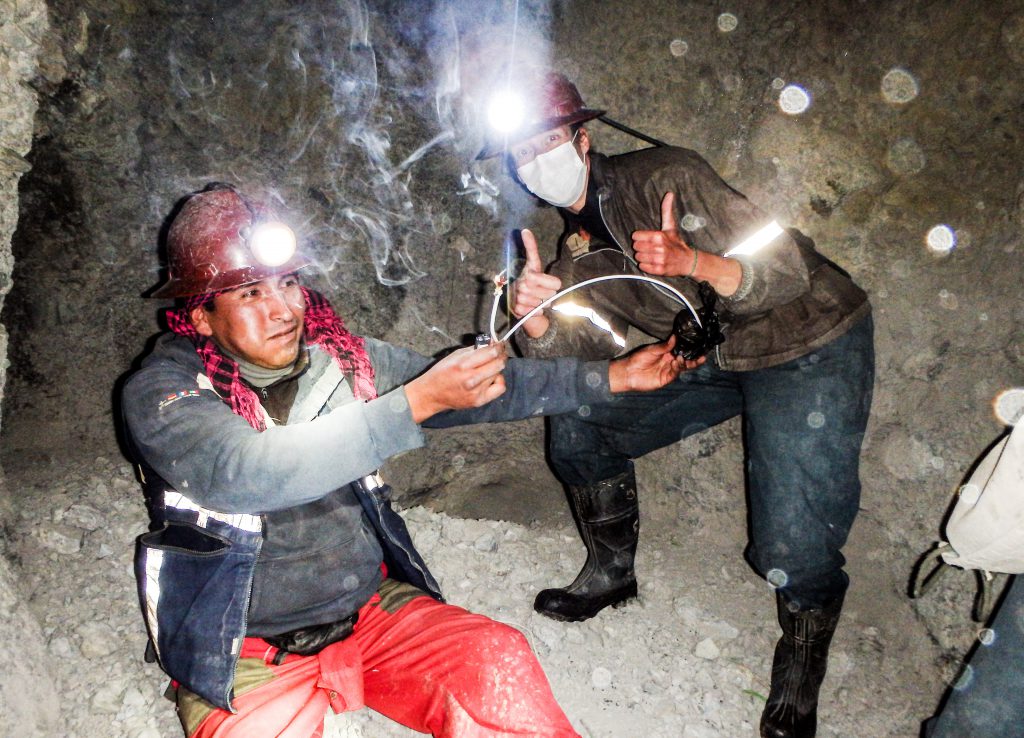 The mine in Potosi: The bang was incredible

Over a twisty tar road, we headed for Sucre. We took a bit of time to catch our breath in an overly social backpackers full of interesting travelers. We enjoyed the lovely, honest kitchen of the Bolivian mama’s in the comedor, the poor man’s restaurant say, and enjoyed strolling around in this historical city. Then after a bit of tar road, we finally ended up on the dirt track to Coroico. But we kind of underestimated the road conditions a fair bit, as we spent more than 4 days riding here instead of just 1 day as we first expected. The many busses and trucks that changed the road in one big cloud of dust, also didn’t exactly promote higher speeds I must say. But the ride itself, along the endless coca fields and remote little villages, was amazing. El Camino de la Muerte, Death Road, was just the cherry on the cake: a 35 kms uphill over a narrow dirt track, just next to a vertical deep drop, through mist and under waterfalls… This once ‘most dangerous road in the world’ remains an absolute must do for those in the neighborhood. 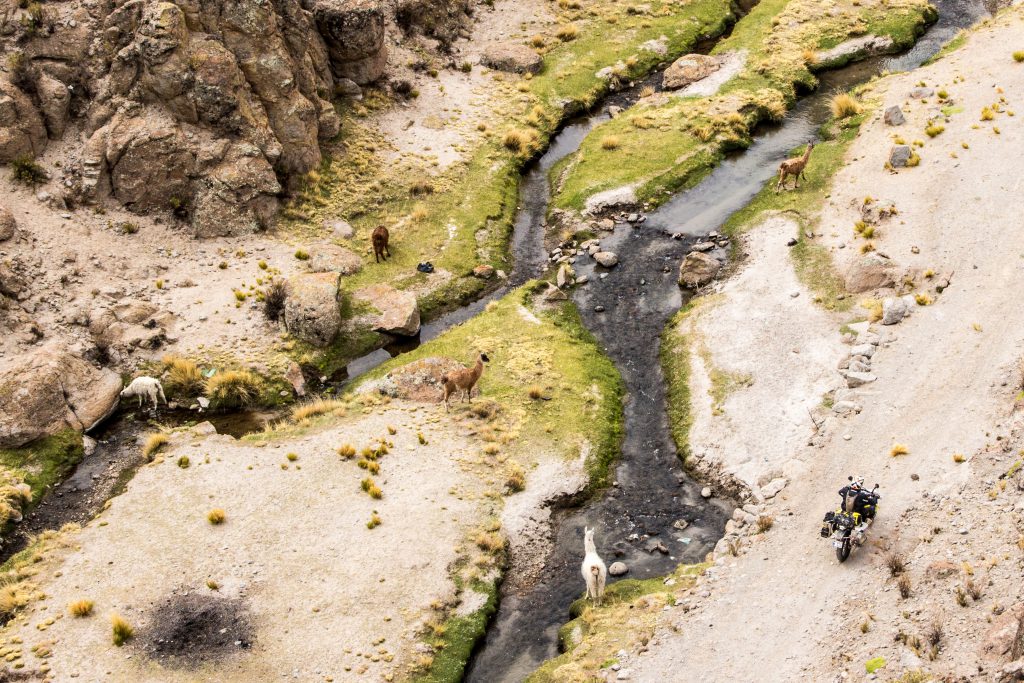 Llama’s along the track to Potosi 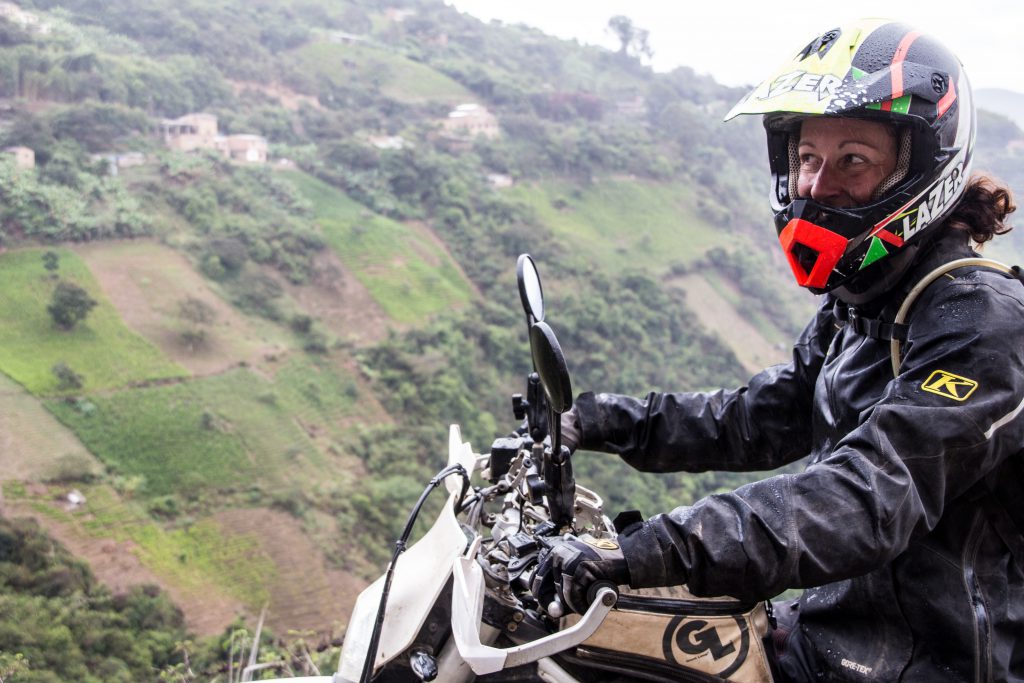 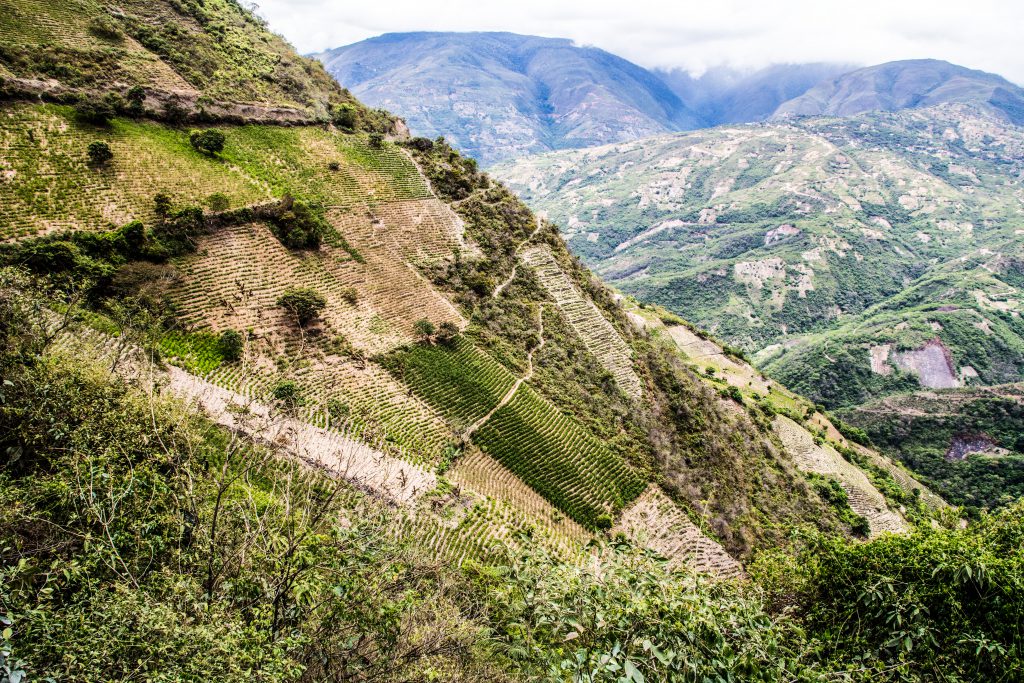 Coca fields on our way to Coroico 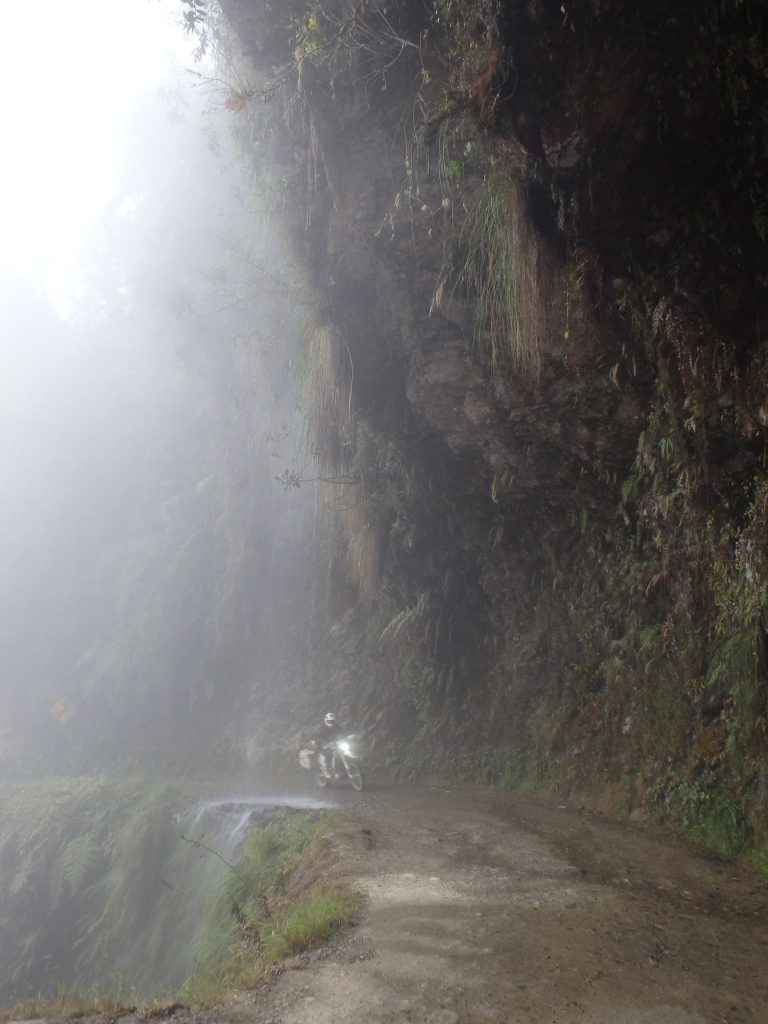 La Paz meant party in the first place: we were just 1 year on the road and couldn’t let that pass just like that. We enjoyed a great dinner and went partying until early in the morning, all Bolivian style. We truly enjoyed the atmosphere in this awesome, crazy city but after 5 days, it was time to move on. Well, that was easier said than done, as La Paz is notorious for its many strikes and demonstrations. Thousands of students chose to block the main road which made us spend more than, 3 hours riding the mere 5 kms to take us out of the city centre. 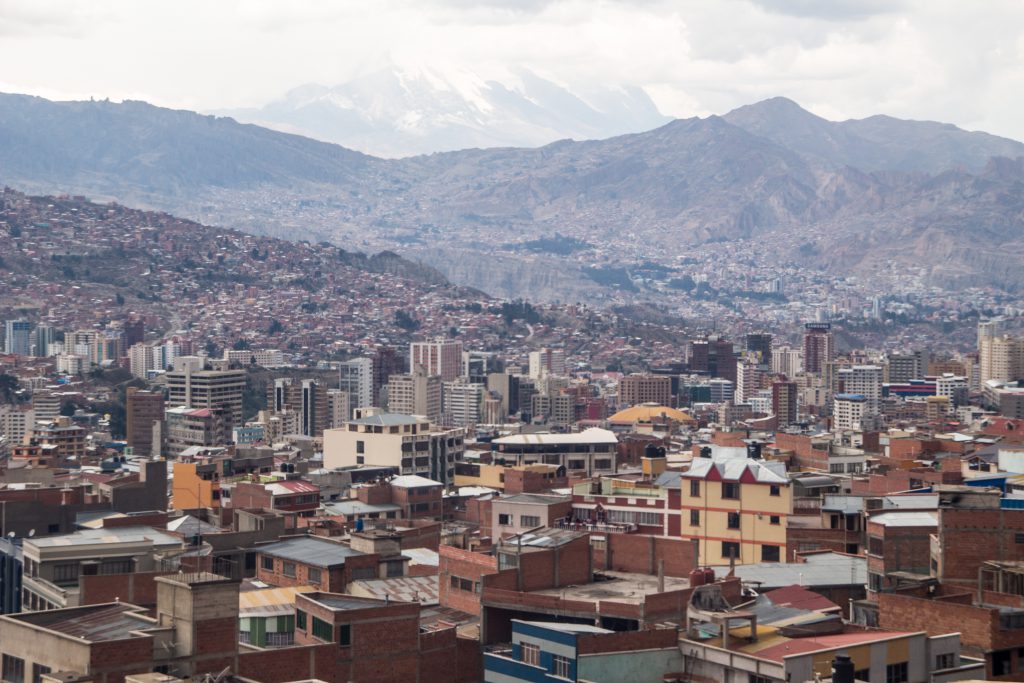 Lake Titicaca, the highest navigable lake in the world, is absolutely worth the visit. And the cosy backpackers town of Copacabana is just ideal spot for an organized visit to ‘Isla del Sol’ and Isla de la Luna’, respectively islands where, according to the Inca legend the sun and the moon were born. The clearblue lake on a 3800m altitude with the snowcapped mountains of the Cordillera in the back: it is an awesome experience!

From Copacabana, it’s just a 15 min ride to the border with Peru. Bolivia is still one of those countries you don’t want to miss out on! 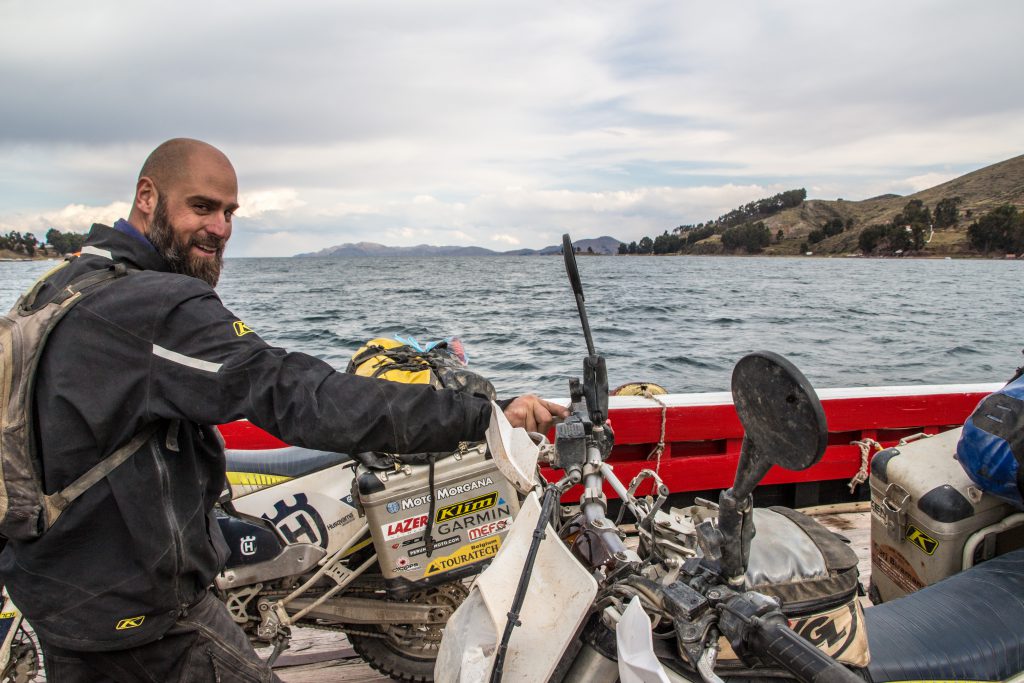 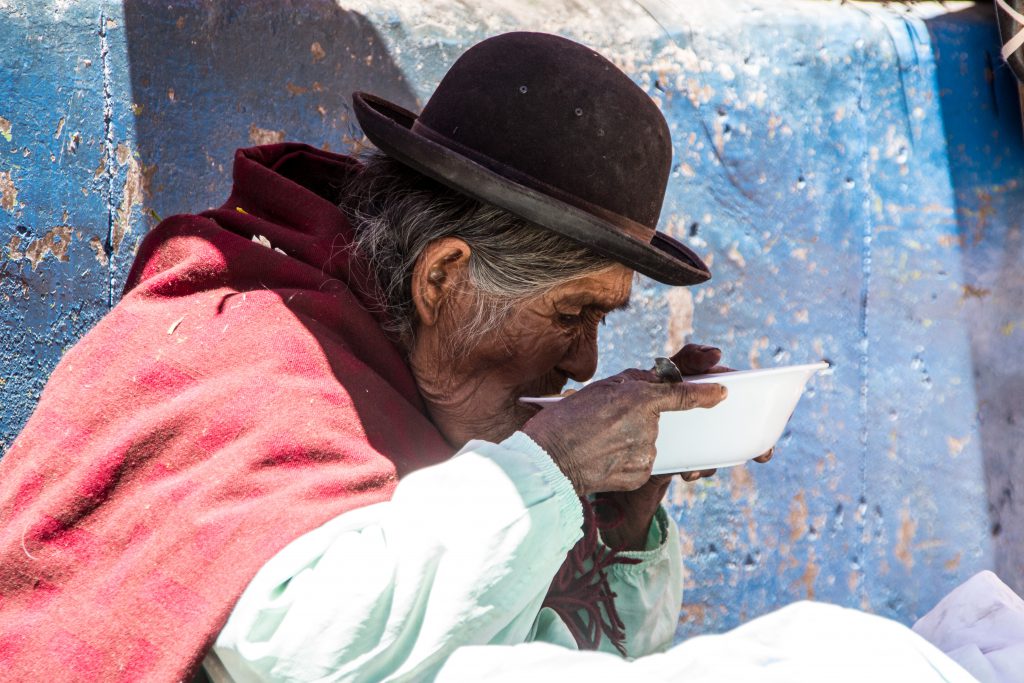 All is still pretty traditional in Bolivia 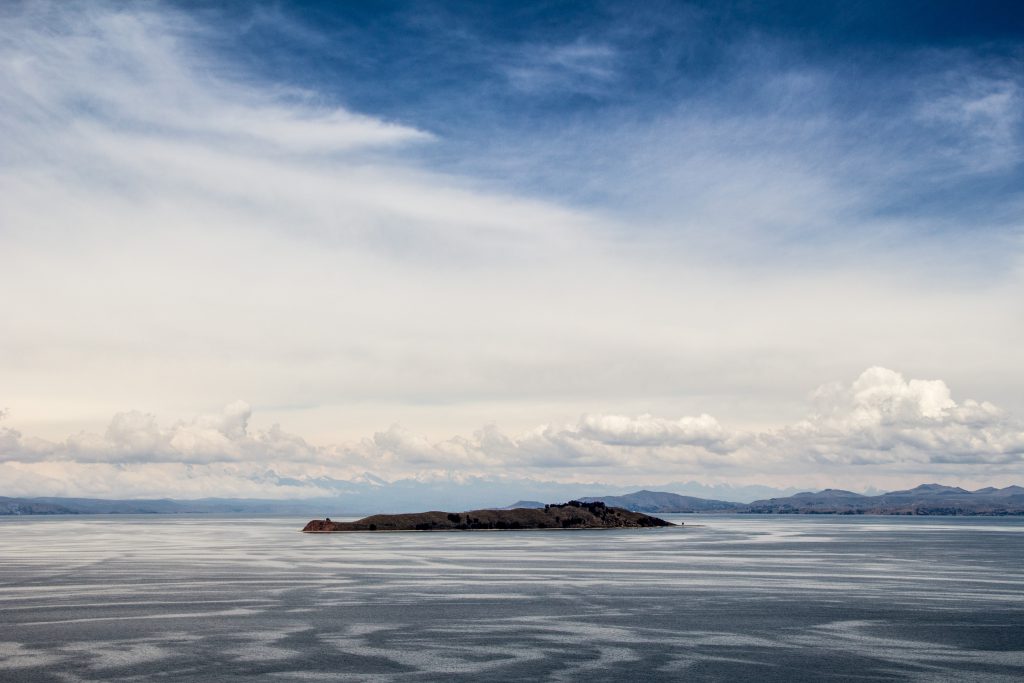