After a long series of flights to Buenos Aires – flying on the cheap never goes in a straight line – a ferry and a 3 hour bus drive, we finally arrived in Montevideo, Uruguay, totally exhausted. And as if that weren’t enough, along with the start of a new continent came a new series of setbacks. We had the same in Africa with the crashes and the diseases…

It all started when we sat in our dirty, humid room in Montevideo and got the message from the shipping agency: the bikes were delayed by at least 3 weeks. Damn! Half a day of stress, numerous phone calls and a search for a better place to sleep was what it took to reduce these 3 weeks to a mere few days. But Montevideo didn’t seem to be ‘the place to be’ to be stuck for a while: we couldn’t appreciate the lack of atmosphere, the sad looking faces in the streets, the camera surveillance all over nor the hefty prices!

It won’t surprise anyone we felt like kids in a candy store when we were finally able to go fetch the bikes at the airport. Customs clearance was a breeze and our eyes twinkled when we opened the crate and saw our Huskies intact. (more info on shipping bikes) 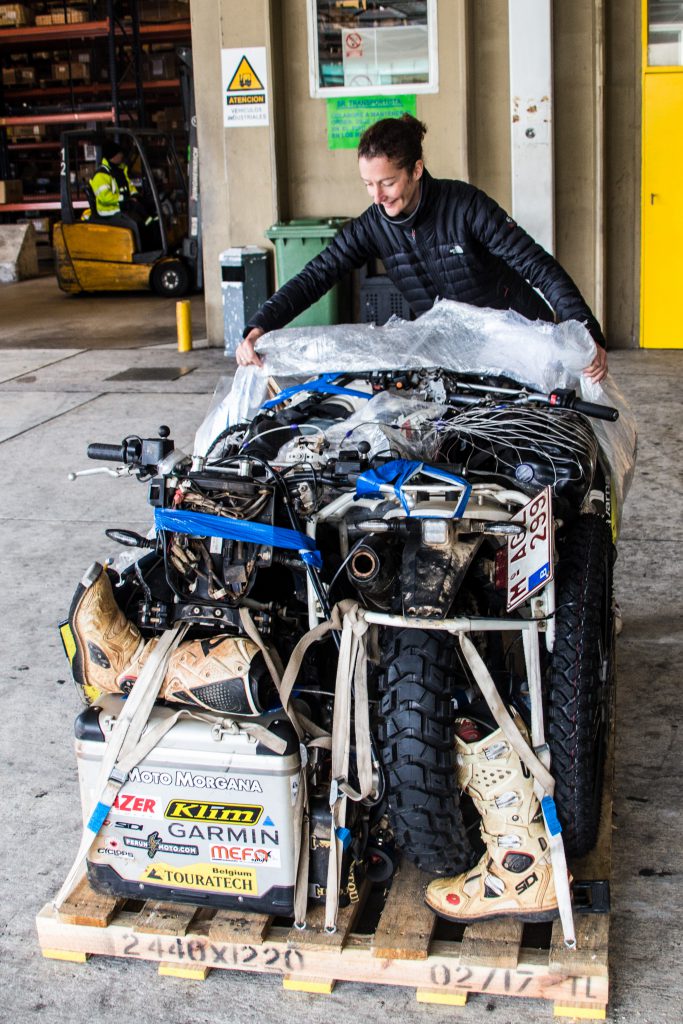 The first few kilometers on South American soil gave us wings. Oh boy what did we miss those rides! But unfortunately Tom’s bike could have used a shot of Red Bull too. We only rode a mere 150 kms until the Huskie started refusing duty. A tough stubborn bull that didn’t feel like obeying a single command from his master, that was what Tom’s bike felt like. We just made it to the next little Uruguayan town. We were desperate, but luckily one of the locals offered to help us. Our Spanish wasn’t really up to standards yet, but this guy did everything to make himself clear and to understand us. We had a new fan, that much was clear! And he did what fans do: He helped us find a mechanic that allowed us to use his workshop so we could clean that clogged injector. Not that he had the right tools to do so, but a bit of injector cleaner and a strong breath did the job. 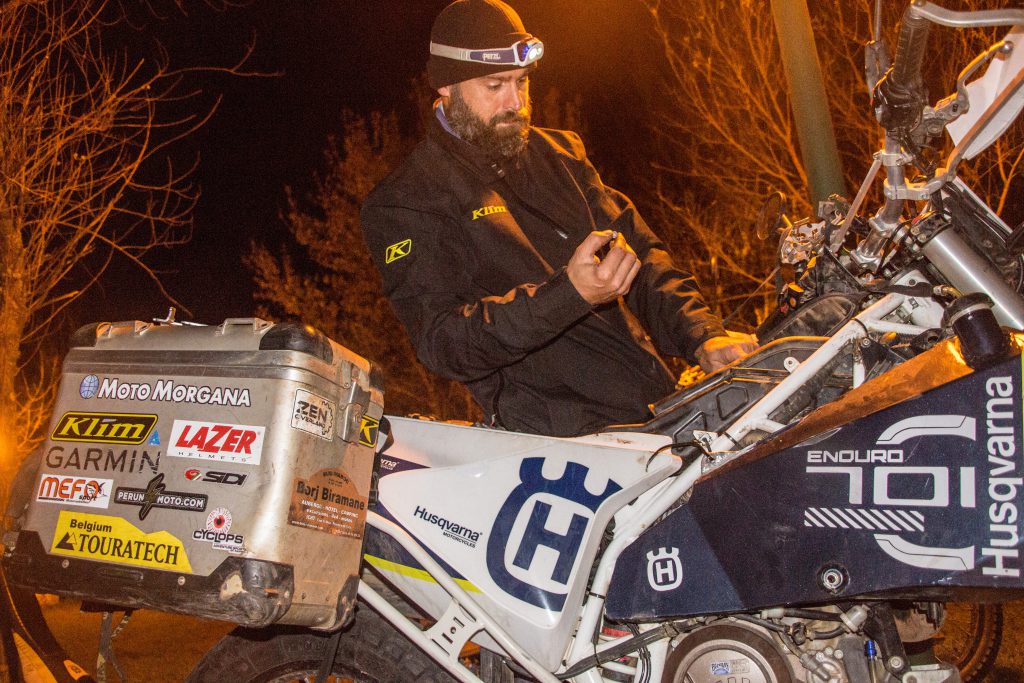 There it is, that bloody injector! 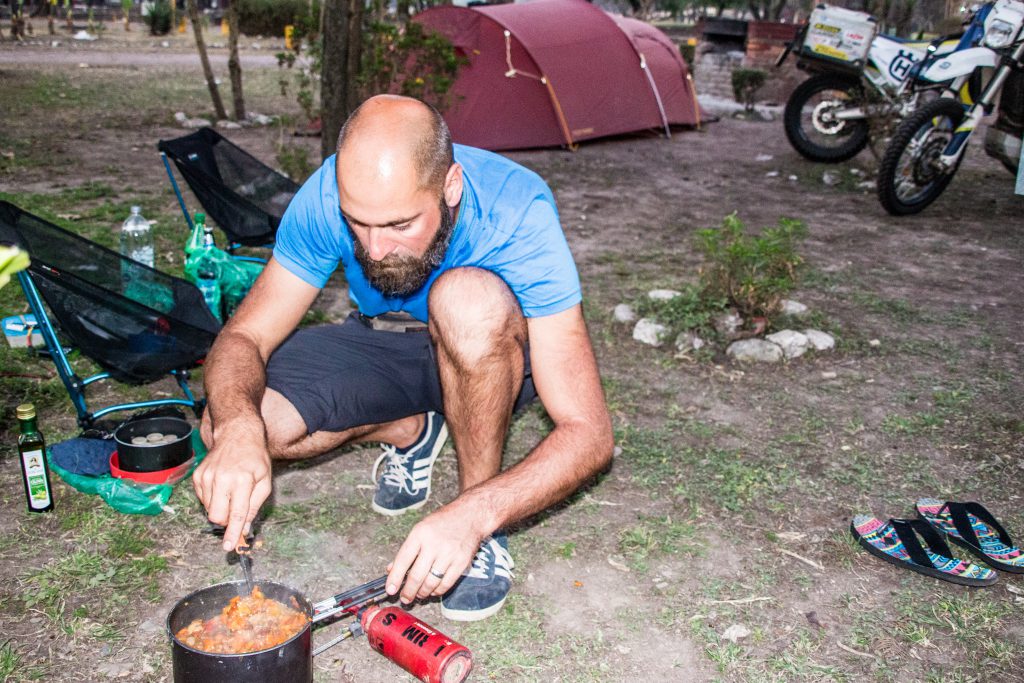 We were so happy to pick up the outdoor life again

We left in good spirits the next morning. But it only took a mere 500 kms to find out that the stubborn bull hadn’t exactly become the stallion it used to be yet. Tom again suffered big time to make it to the campsite of an even smaller town, in Argentina this time. He worked until midnight to swap parts from one bike to the other. With my injector, his bike ran just fine. It became clear my breath just wasn’t strong enough to blow all the dirt out of the injector. We weren’t exactly in a place where you would expect to find a mechanic with a professional ultrasone injector cleaner. But the odds were on our side. This guy cleaned Tom’s injector for free and this time the stallion was definitely back. The grilled meat and the bottle of wine we got offered by some local guys at the campsite were the cherry on the cake! 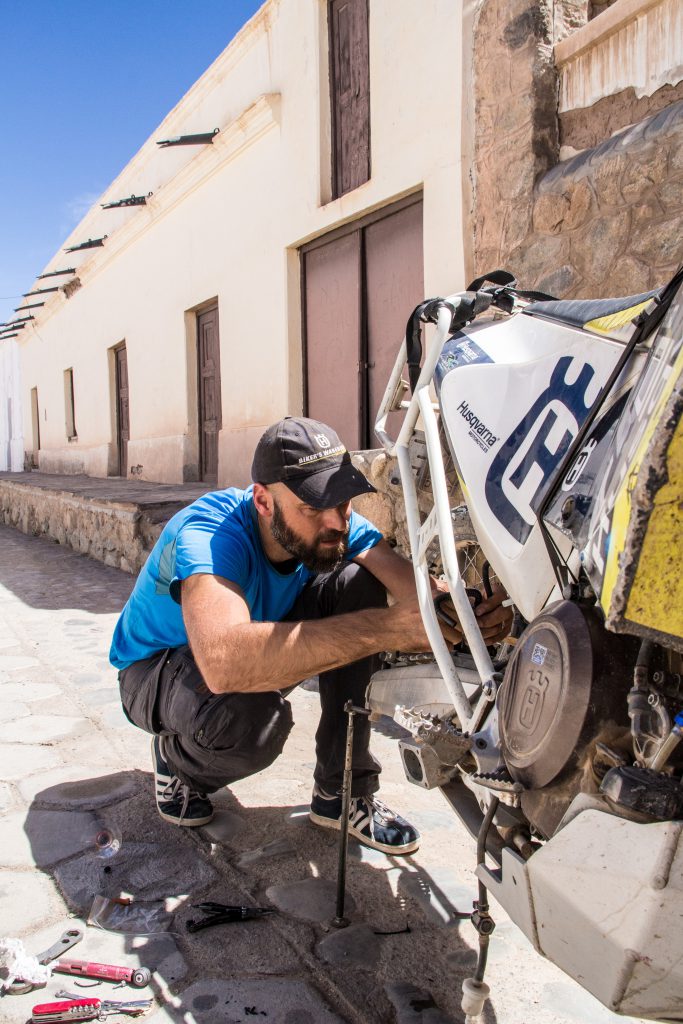 Fixing the fuel pump in Cachi,Argentina

We moved further north to Tucuman, the last city where we would be able to find spares. The local Huskie and KTM dealers were extremely helpful, but finding sprockets and fuel filters turned out to be quite a challenge. That meant we had to wait another few days on a local campsite where locals, the nasty kind this time, seemed to enjoy bullying us with loud music. The sleepless nights made my emotional energy level drop below zero. I was so happy when we were finally able to leave! 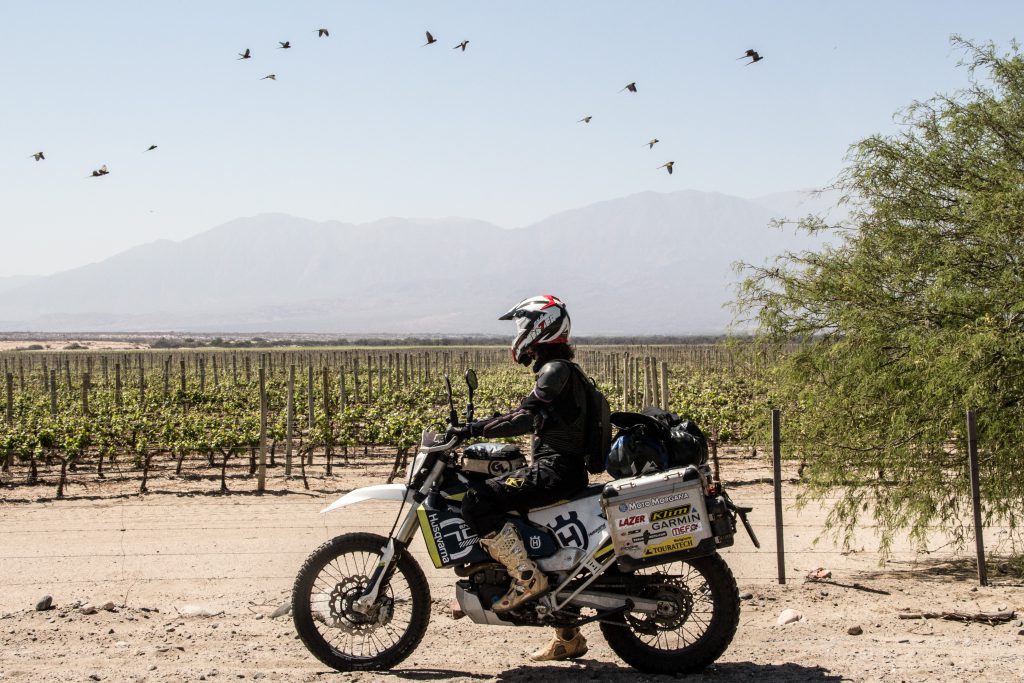 Vinyards and wineries all over in Cafayate

But boy how did the north of Argentina compensate for all this suffering. The last few days we have ridden the most amazing dirt tracks through the most stunning scenery. We met the nicest people, tasted the local wines and really enjoyed traveling again. The fact that my fuel pump now refuses duty  after an overdose of dirty African petrol and that we have to wait a few days for a spare, doesn’t spoil the fun. This is South America like we dreamt it! 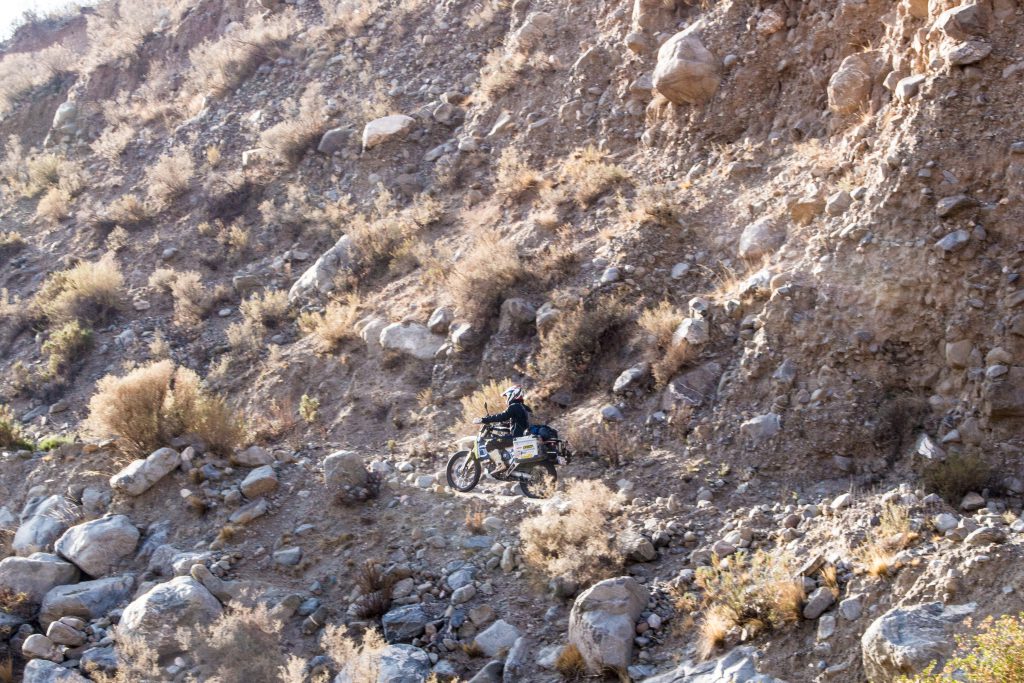 A bit of track riding in the morning never killed anyone 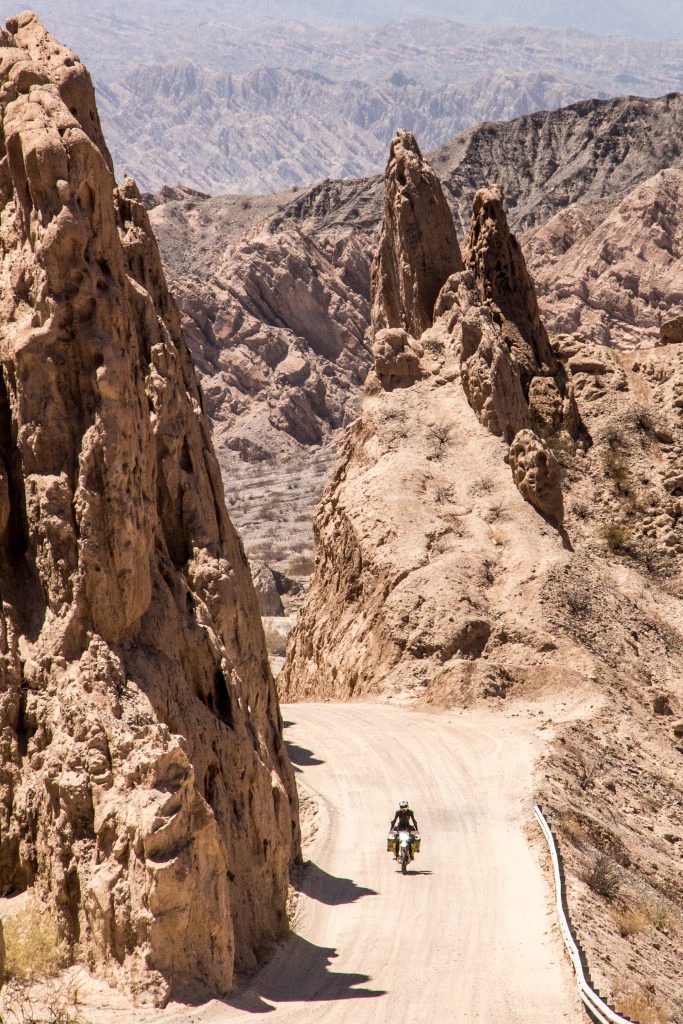 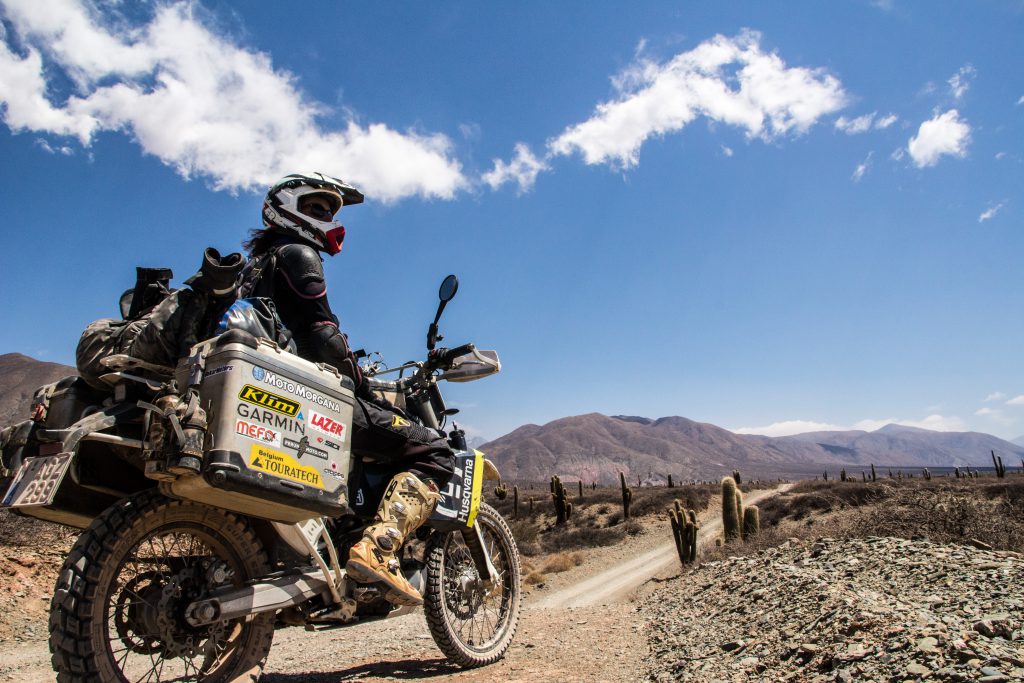 This is cactus land!