We left Dakhla and the Western Sahara behind us and apart from our fuel bottle being stolen, all went well. The Mauritanian border promised to be a horror story, at least that’s what they warned us for. They would rip us off for sure, we would have to pay loads of money to get through and it would take forever to cross the border. But surprisingly, all went smoothly. We didn’t even have to bribe anyone. Sympathy and admiration for our trip to South Africa opened quite a few doors so it seems. 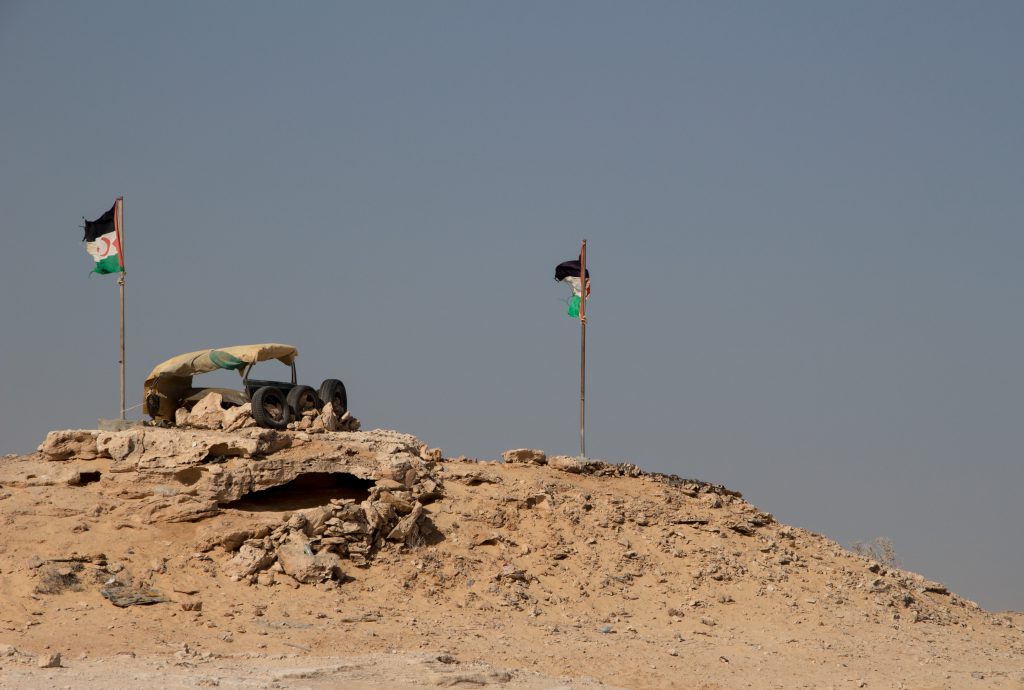 The Polisario now have a ‘checkpoint’ at the Mauri border

It became clear pretty quickly that Mauritanians are quite different from their Moroccan neighbours. In case you’re in real need for something, petrol, a place to spend the night…, they will try to squeeze you out like a lemon, especially in the bigger cities. Despite the poor living standards of the regular Mauritanian, life is far from cheap here.

From the northern city of Nouadhibou we head south via the main tar road and we decide to make a small side step via the beach through the National Parc D’Arguin. Loads of pelicans feed on the leftovers from the fishermen and when yet another flock of birds skims over our bikes, we can’t but be impressed. 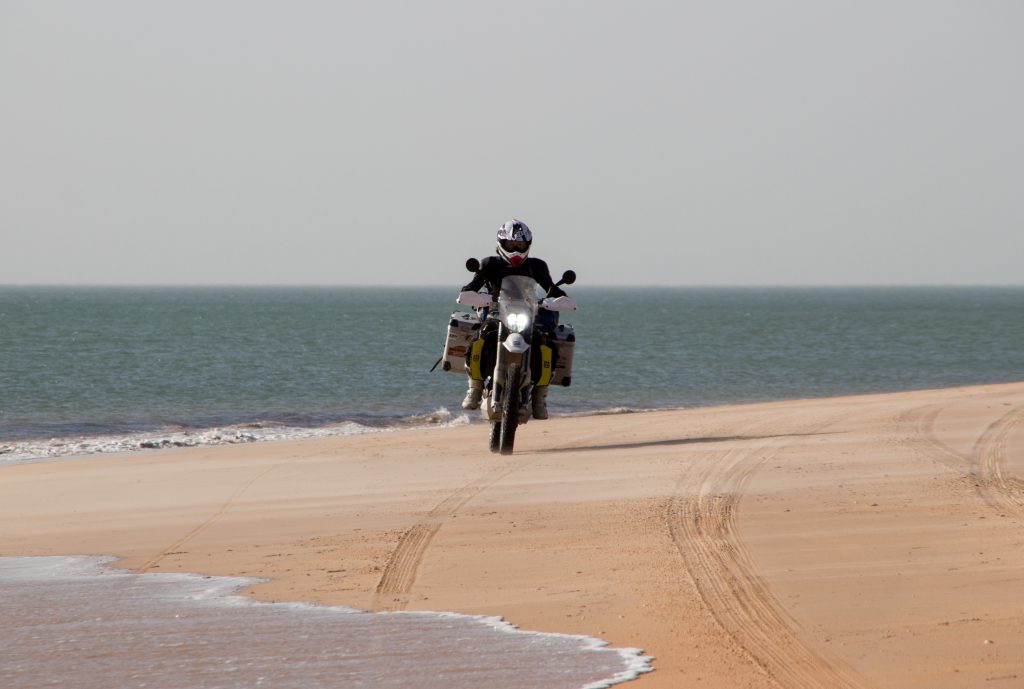 Beach ride between Nouadhibou and Nouakchott 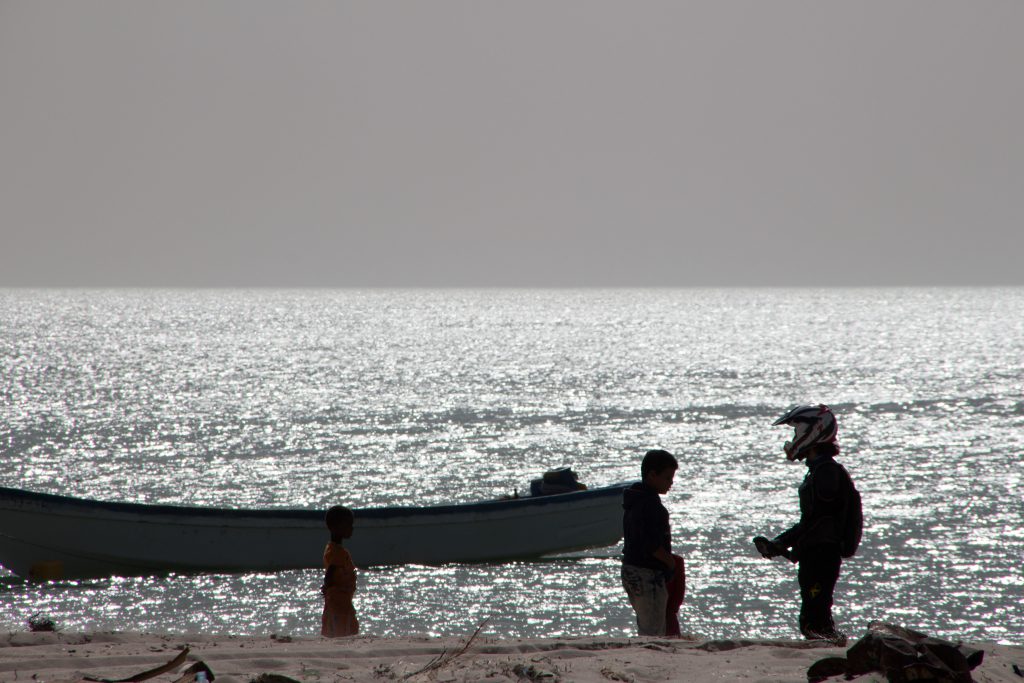 Beach ride between Nouadhibou and Nouakchott

Another thing that impressed us, albeit in a different way, is the enormous piles of trash all over Nouakchott, the capital of Mauritania. It’s literally everywhere. And if they don’t set it on fire, they gladly dump another truckload on top of it. Needless to say that the fishing activities here do not really contribute to a nice smell… 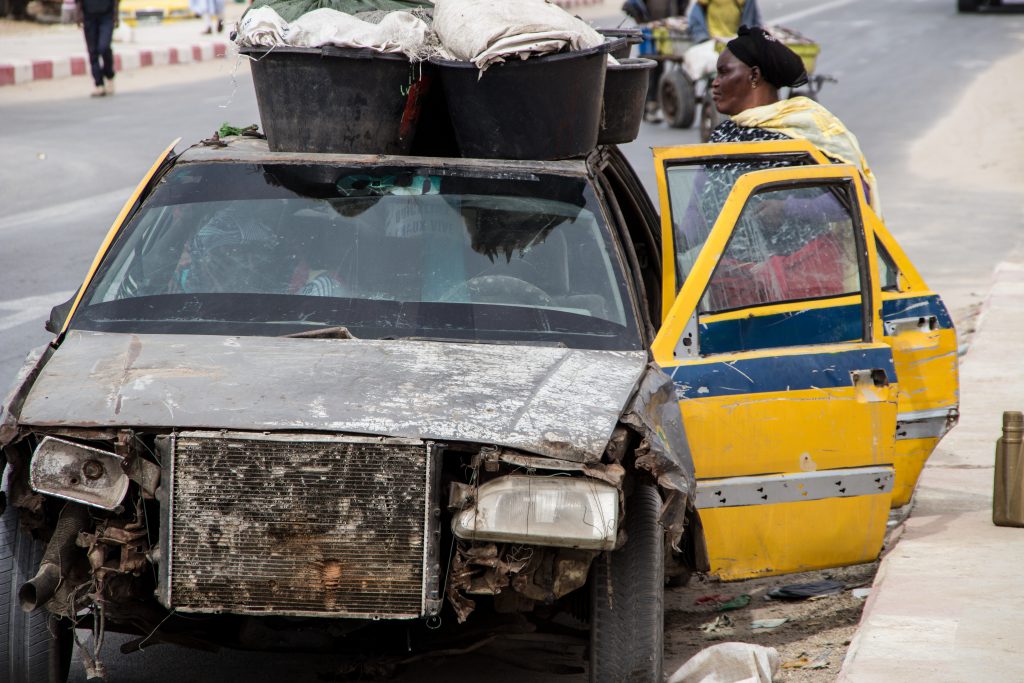 A regular taxi in Nouakchott, I kid you not!

It doesn’t take long before we head inland and after a good 400 kms of sealed road, we arrive in the town of Atar. It takes a little effort to find petrol every now and then though and we can’t but buy from the black market. In every town there seems to be some hidden ‘secret’ place where they sell illegally smuggled Algerian petrol in jerry cans and so far,the quality always seemed ok. But the contrast with Nouakchott is huge. Taking the local circumstances into account, all looks pretty clean here and people are much more ‘easy going’.

We take the 90 kms of washboard piste towards the historic town of Chinguetti. Now washboard can be ridden either very slowly or at speeds over 80 kms/h. Everything in between just shakes and rattles your bike to pieces. So the throttle goes wide open and the piste easily allows for speeds up to 110 kms/h. Caroline is riding a little slower so I am always a little ahead. But when after arriving in Chinguetti, she doesn’t show up after a full 15 minutes, I start feeling uncomfortable and I decide to turn around. And then there she is, only a mere 5 kms further down the piste, next to a crashed bike. She is in pain and she’s completely disoriented. She doesn’t know where she is nor what she is doing there. 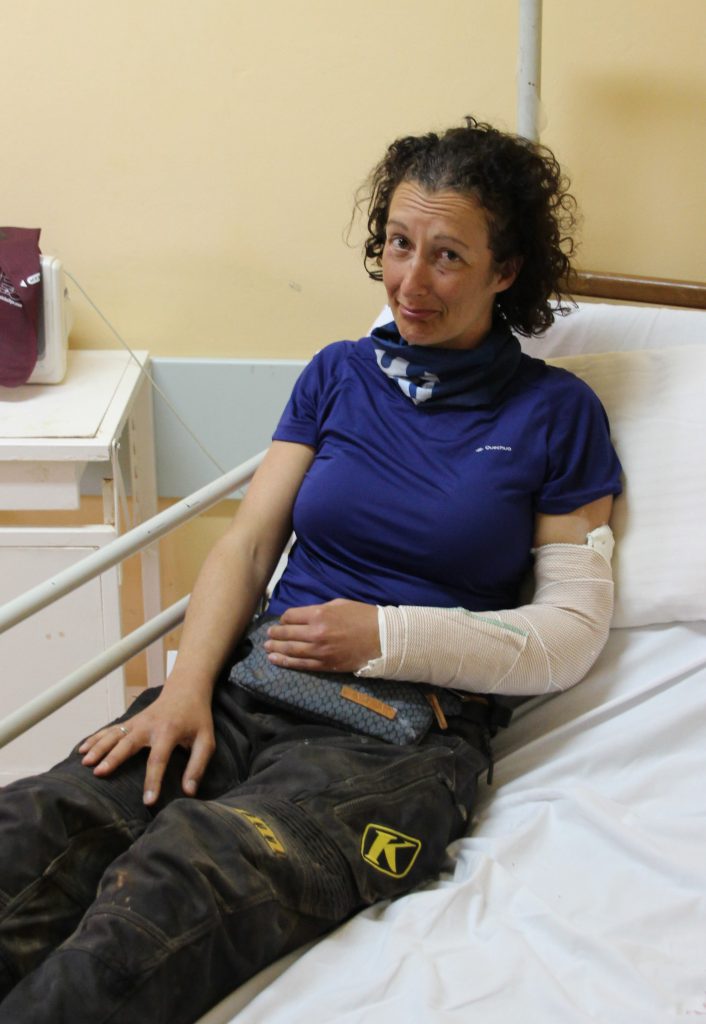 3 German tourists help us get her to the nearest hospital in Chinguetti, where an American doctor suspects her arm and ribs to be broken. But the x-ray machine just gave up and we can’t but getting her to the hospital in Atar in an ambulance over the bumpy road. It’s the technician that operates the x-ray machine that seems responsible for the diagnosis here: no fractures, but a heavy concussion of the brain,  a series of bruised ribs and a swollen left side of her body from top to toe. I remember her joking the night before: “Hey, we’re 5 weeks into our trip now and we haven’t seen a hospital yet”. As if it were meant to be…

The original plan was to celebrate Christmas in Senegal. Now we’re facing a rather dry Christmas içn the Sahara together with our ever so friendly Dutch host Just. It could have been worse.

We hope to be in Senegal before New Year’s Eve. It is what it is!