It seems like we’ve entered a complete different world. If you want to take a picture here in Mali, you get the brightest smile. In case you’re in need of something, people are there to help. When we leave on our bikes, they wave us goodbye and wish us all the best on our trip. But Mali isn’t exactly risk free at the moment, especially in the northern regions, home to bandits and terrorist groups. Not everyone seems to have the best intentions unfortunately… 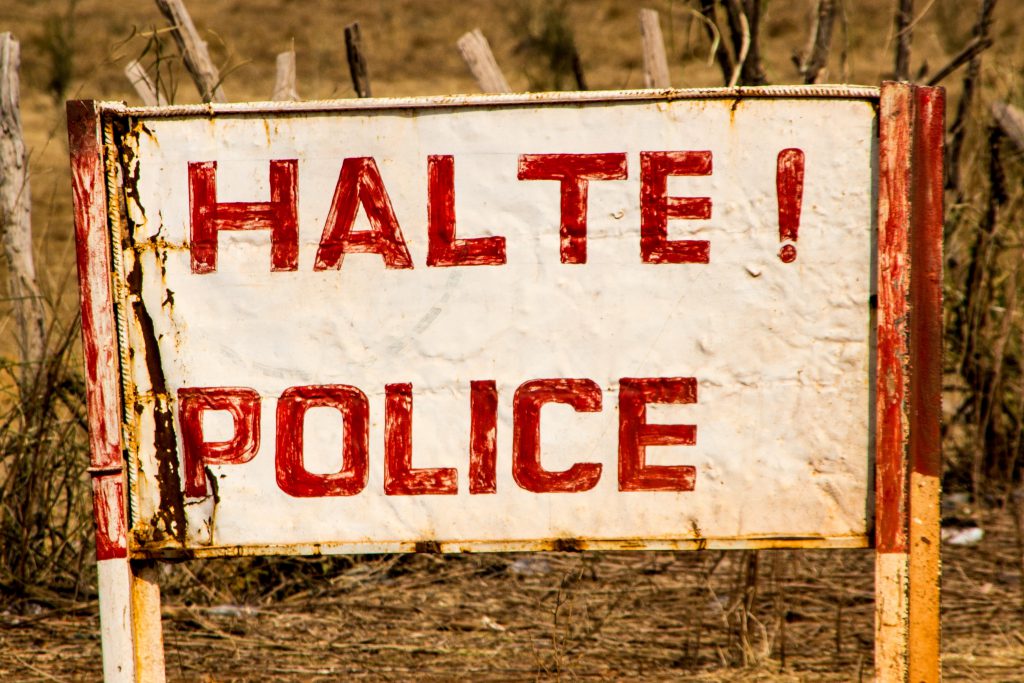 We entered Mali without noticing customs or police…

In Kayes, about 100 kms across the Mali border, we have what was probably the best meal on our entire trip. A Malinese woman was cooking at the side of the road and lots of people were queueing for what looked like a sloppy plate of beans, pasta and sweet potato. But for a mere 350 CFA or a little over half a euro, we got the best food ever. This genuine Malinese street food tasted truly divine! We couldn’t pitch our tent in the middle of the city, but we found an insanely cheap room, albeit without running water.

The next morning we took the piste to Manantali, where a nice dutchman ran a banana plantation and a campsite with a magnificent view over the Bafang river. Getting up early, having banana and bread for breakfast and going for a swim in this pristine environment: priceless! But the piste… Well, it was a bit harder and more challenging than we expected. There were plenty of sandy stretches, potholes, rocks and the like. 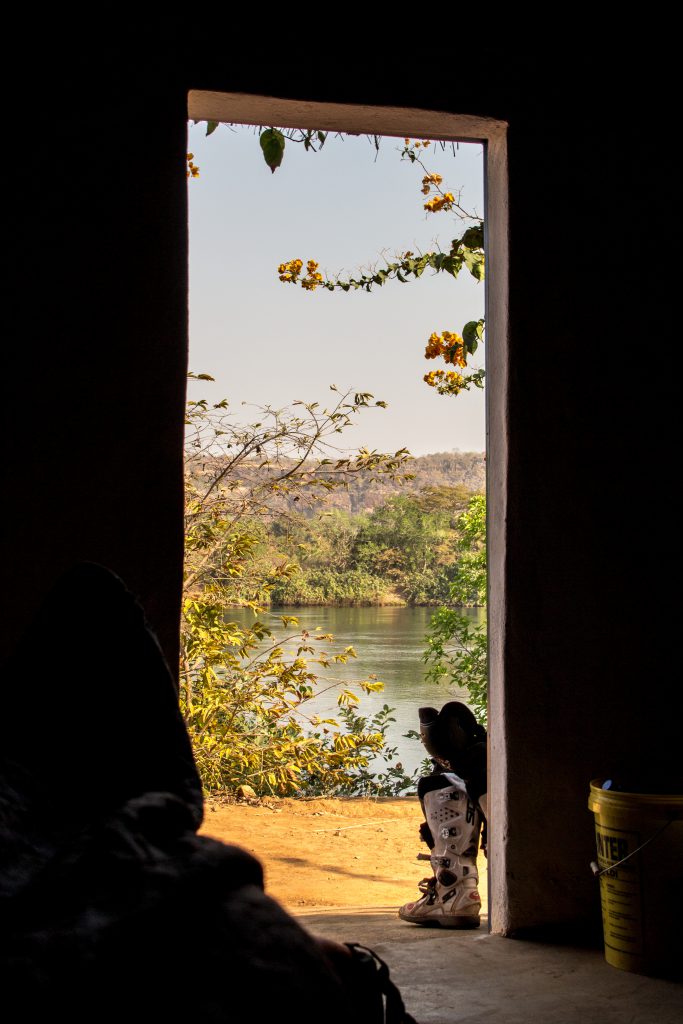 View from our hut at Cool Camp, Manantali 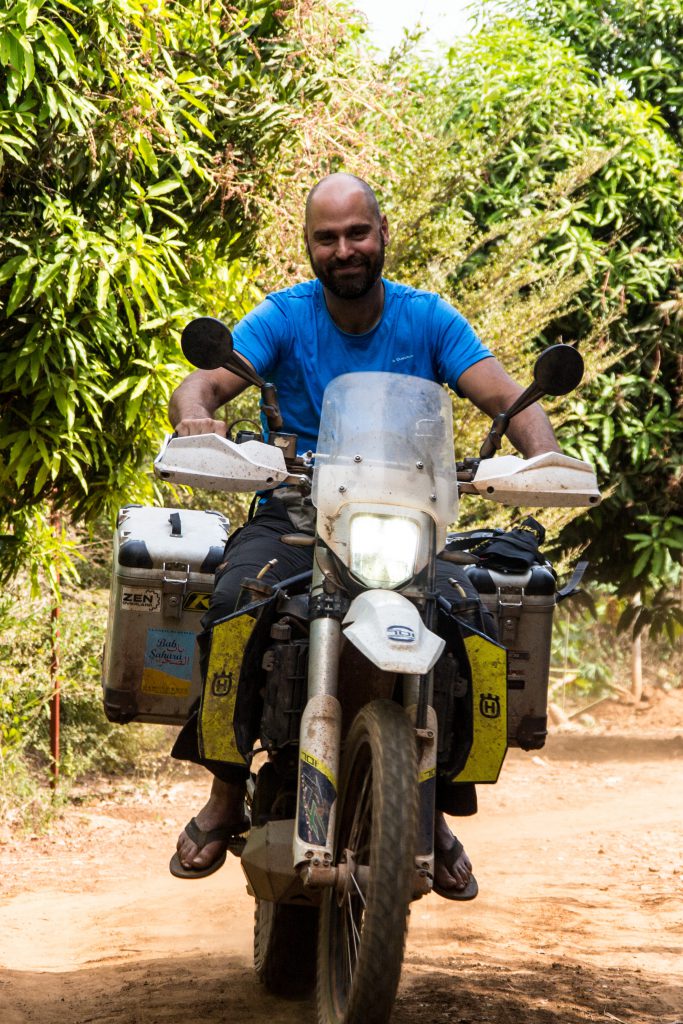 Bamako was the place to get our visa for some of the next countries and we heard it was actually a rather nice place to stay as well. The road that took us there started with some 110 kms of pretty flat, good quality piste. Every now and then there was that sporadic pothole but lifting the front wheel just a bit got me through them without much of a problem. It was great fun and since a long time I got hungry again for speed, so the throttle went wide open. I regularly stopped in one of those typical African little villages to allow Caroline to catch up with me, after which I took off at high speed again. But all of a sudden things went wrong. A large pothole, about 2 meters in diameter, wasn’t really the problem. But what I failed to notice was that right after that first pothole, there immediately was a second even larger and deeper one. It took me by surprise and at a speed of about 100 km/h, I was violently thrown off the bike and hit the ground pretty hard. I immediately got back on my feet and started freeing my bike from the acacia  bushes . The windscreen was shredded to pieces and the handlebars got bent. But when I hit the start button, the familiar roaring of the single cylinder engine sounded like a relief. All good! 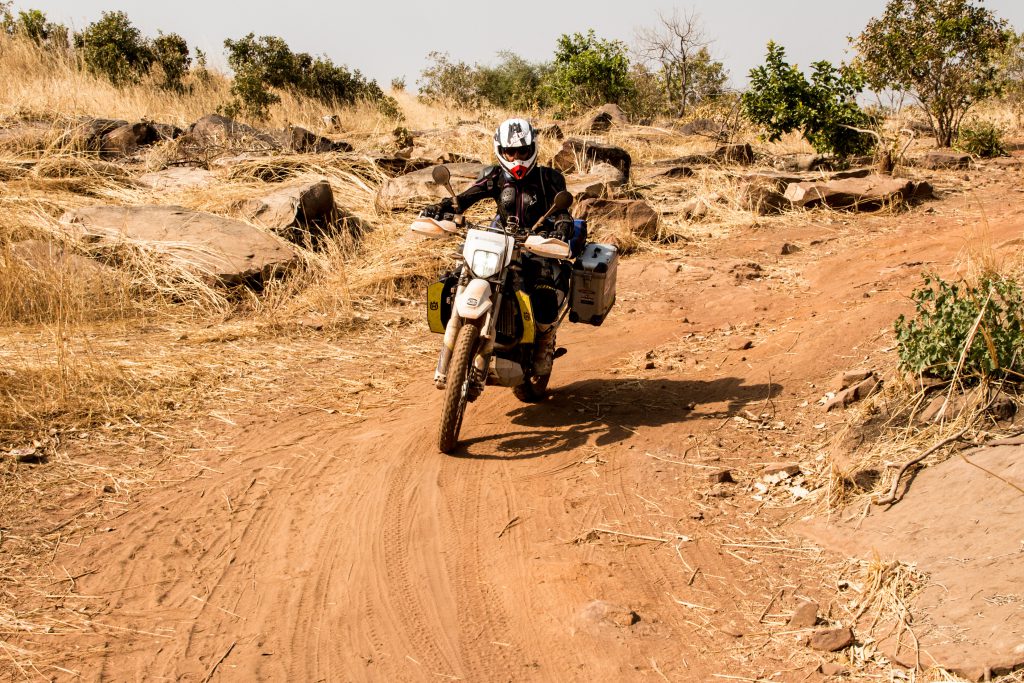 Caroline on a nice stretch of piste

We rode another 250 kms over the sealed road when after a while I started to notice something wasn’t quite ok: shifting gears got more and more difficult due to the pain in my left foot that got worse. When we arrived in Bamako, I needed assistance getting off the bike and was unable to walk. A visit to the local hospital and an X-ray clearly showed a fracture in my left foot… Now that wasn’t really what I hoped for: 6 to 8 weeks to grow back together… But the doctor assured me that after a bit of rest, I would manage to ride on because the Sidi MX boots would give plenty of support. So we’re having a break now in Bamako, get some spare parts shipped over, drink a few beers, socialize with other travellers and hope to be riding again in a few days!