From the province of Namibe, in the south of Angola, we took the dirt road to Virei. It felt great to unroll our sleeping pad in the middle of nowhere, surrounded by big boulders and Walwitscha plants, and to sleep under the fabulous starry sky of the Namibe desert. We woke up early in the morning to join the sandy track leading us to the remote prehistoric rock carvings of Chitundu Hulu. Locals from the authentic villages all dressed in traditional outfit, luckily pointed us the way through this amazing landscape. I couldn’t but plug my way through the sand. It goes beyond saying that Tom from his side enjoyed the dusty ride to the max! 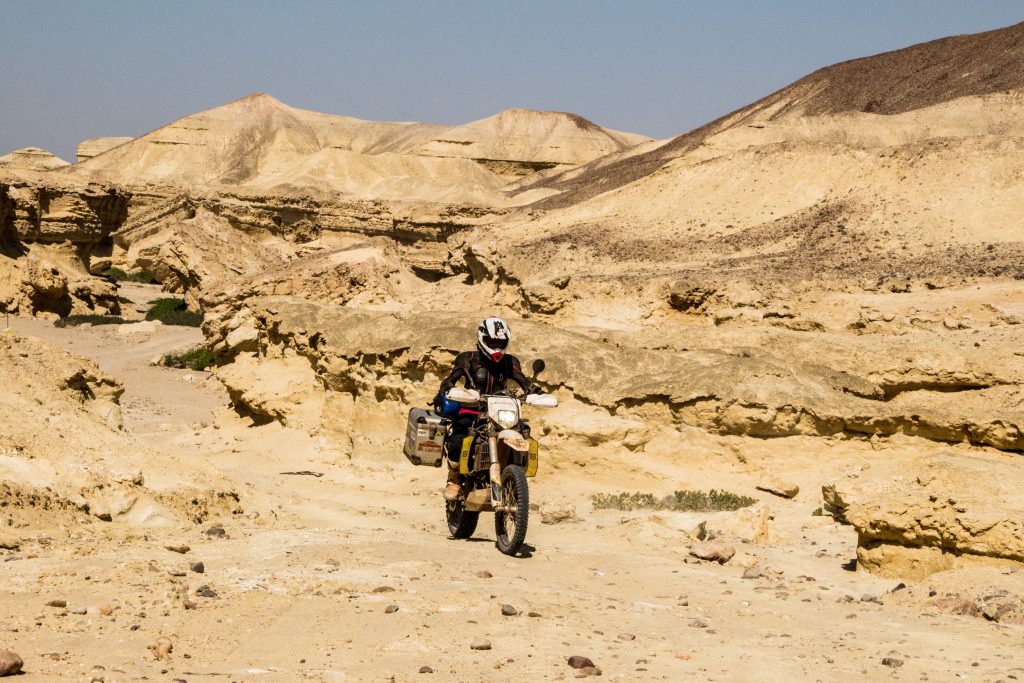 Caroline in the Namibe desert, Angola 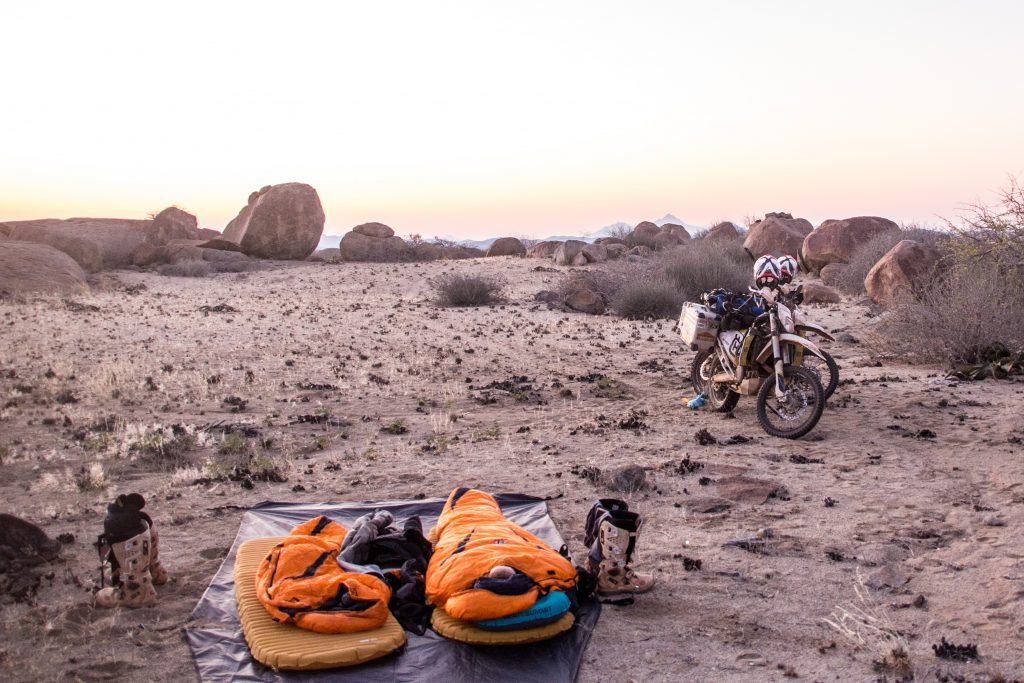 A lovely night under the stars 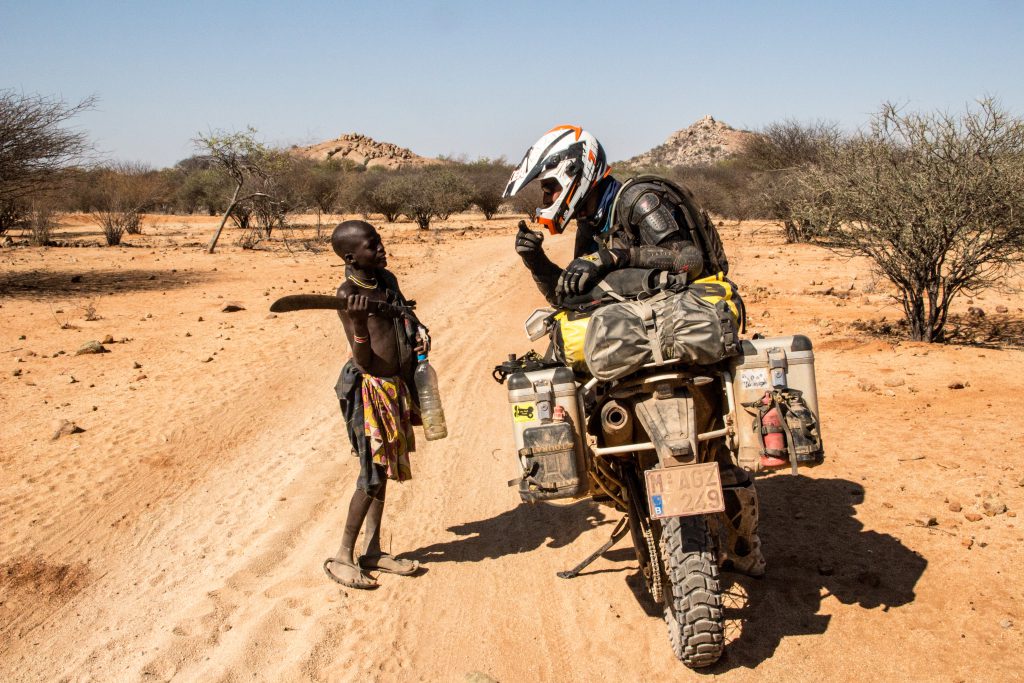 Local kid pointing us the way to Chitundu Hulu 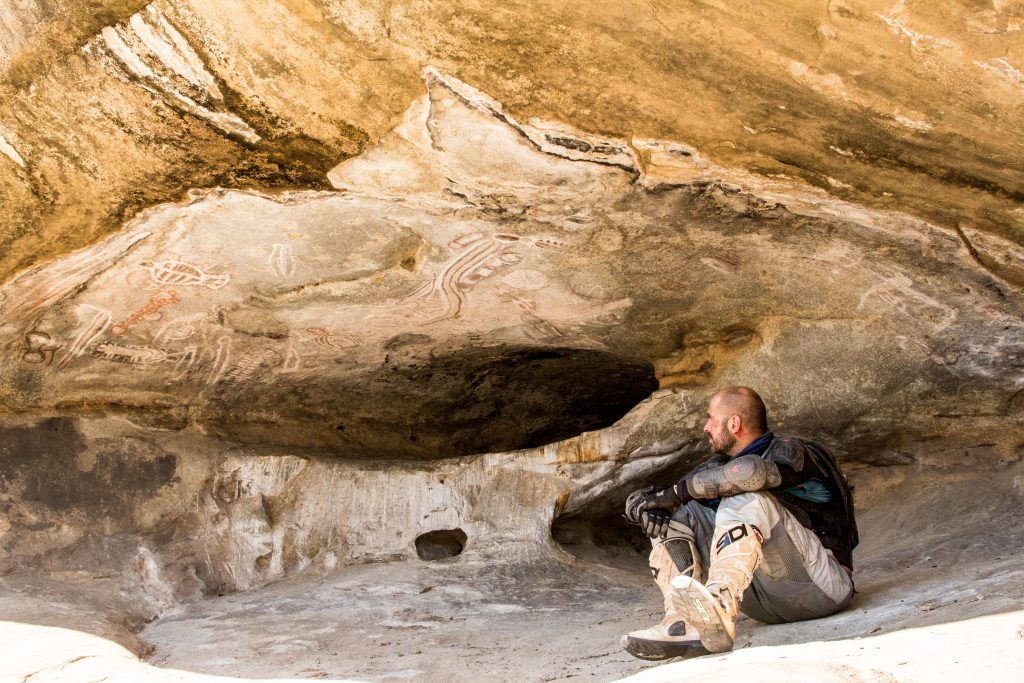 But the road back to the city of Namibe wasn’t quite what we expected: the map seemed to suggest it was nicely paved, but in reality it appeared to be a pretty spicy and challenging stretch of dirt. Rocks, stones, sand, dry riverbeds… We had it all! And on top of that we were delayed quite a bit by two punctures so the last stretch was done in complete darkness. We heaved a sigh of relief as we arrived in the city of Namibe pretty late in the evening. We well deserved that bed and matrass after this long and tough riding day I guess!

We chose the main road to Namibia and worked our way through the twisties in the mountains, along the amazing Serra da Leba and stopped at the Fenda da Tundavala, a canyon where my vertigo was seriously challenged. But what a view! Well, as long as I didn’t look down 🙂  This wo uld be our last sightseeing in Angola, our number one favourite country on this trip so far. 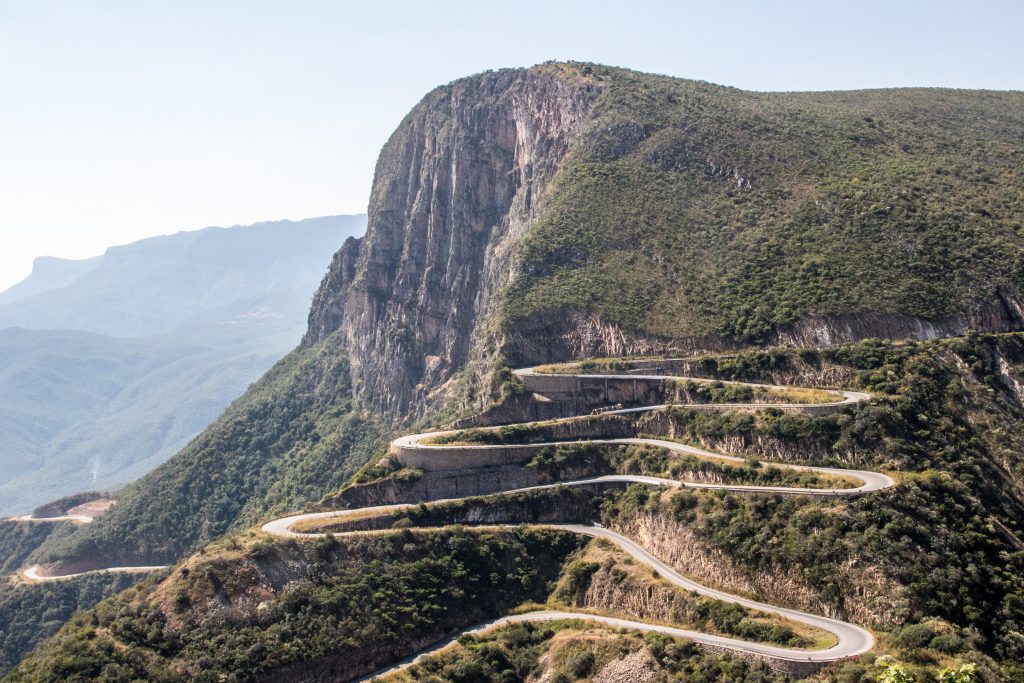 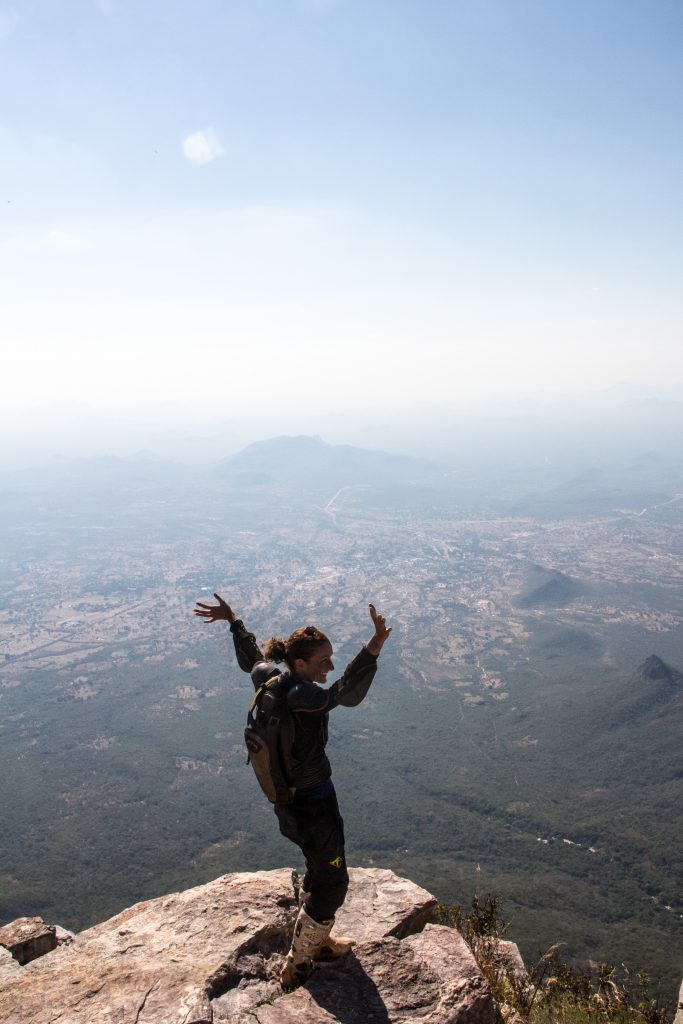 We had travelled Namibia on the bikes back in 2010 and we actually wanted to get to Malawi asap. But Namibia was the first country where we could get hold of spares for the bikes. Toms sprockets were due replacement and his chain was about to snap. But the few days in the country were all about hospitality. We got to know the warm personality of a local ‘ouma’ (grandma) who invited us for breakfast and later for that perfect steak on the ‘braai’ (barbecue). She offered us a bed with those lovely, soft pillows and were covered with presents that would come in handy on the road for sure. Those lovely chats and the overload of good advice… we had a great time there!

A sawing blade, that’s exactly what Toms rear sprocket looked like. The teeth were completely flattened and the chain started slipping seriously when opening the throttle. But with the advice of our new Namibian friends, we found this great motorbike workshop in Grootfontein. Spannie and his son helped checking the valve clearances, put on new chains and sprockets and allowed us to use their workshop to mount new front tyres and clean the air filters. We spent an excellent afternoon in their company! 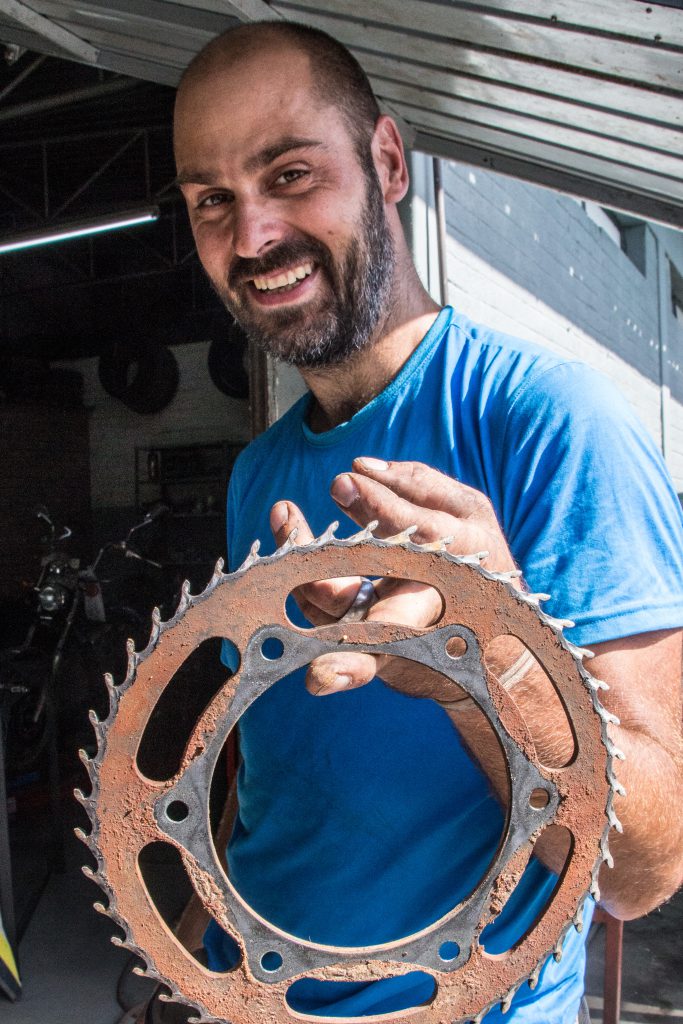 Tom’s rear sprocket was due replacement

We further followed the Caprivi strip in the north of Namibia, heading for Zambia. It had been a while since we last saw elephants, but the roadsigns warning for crossing trunk were all over here. We didn’t get to see them yet here, but we saw plenty of hippo’s. Or let’s say we mainly heard them as we were camping next to the river. It wasn’t until right before sunset these massive mammels started shouting at each other and came ashore to graze and stretch their legs after a day in the water… It was truly impressive, but Zambia would be really top when it comes to wildlife. We can hardly wait! 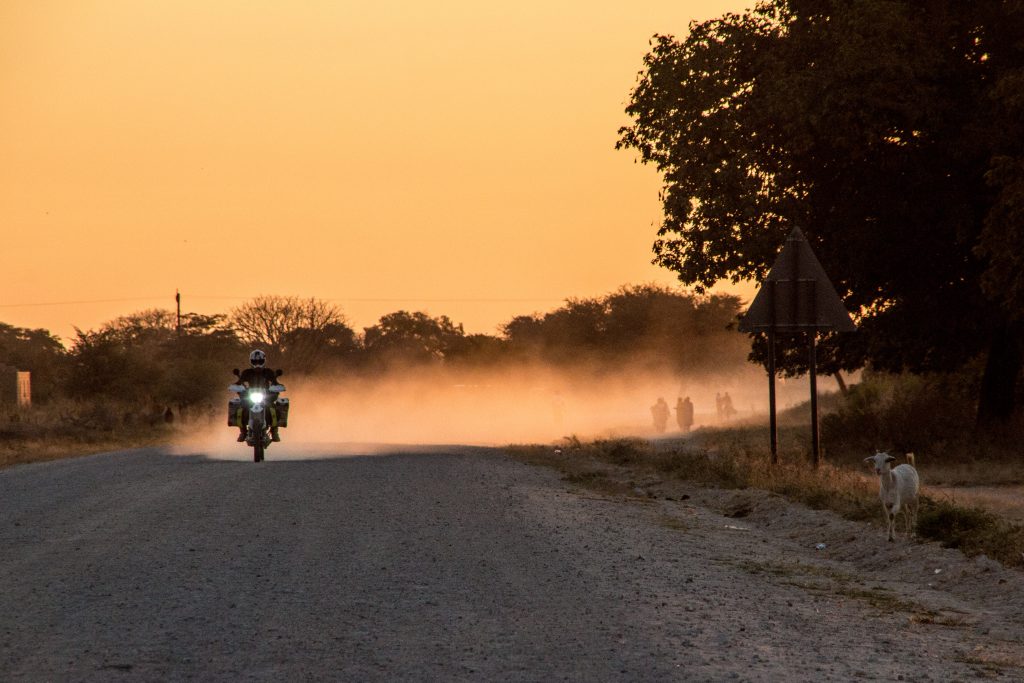 Caroline in the Caprivi strip, heading for Zambia