It started pouring down pretty badly in Kribi (Cameroon), just as we started the 200 km piste to Ebolowa. We doubted for a while, but the idea that it all wouldn’t be that bad kind of prevailed. Travelers tend to evolve to a somewhat more optimistic nature I guess. 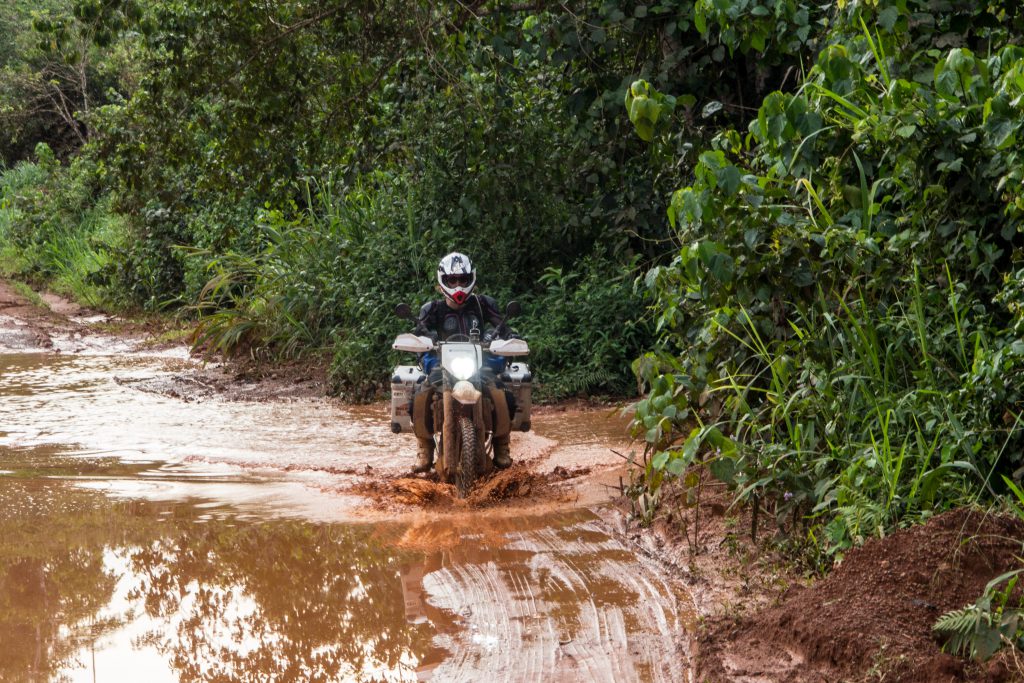 The road to Ebolowa: endless sections of mud 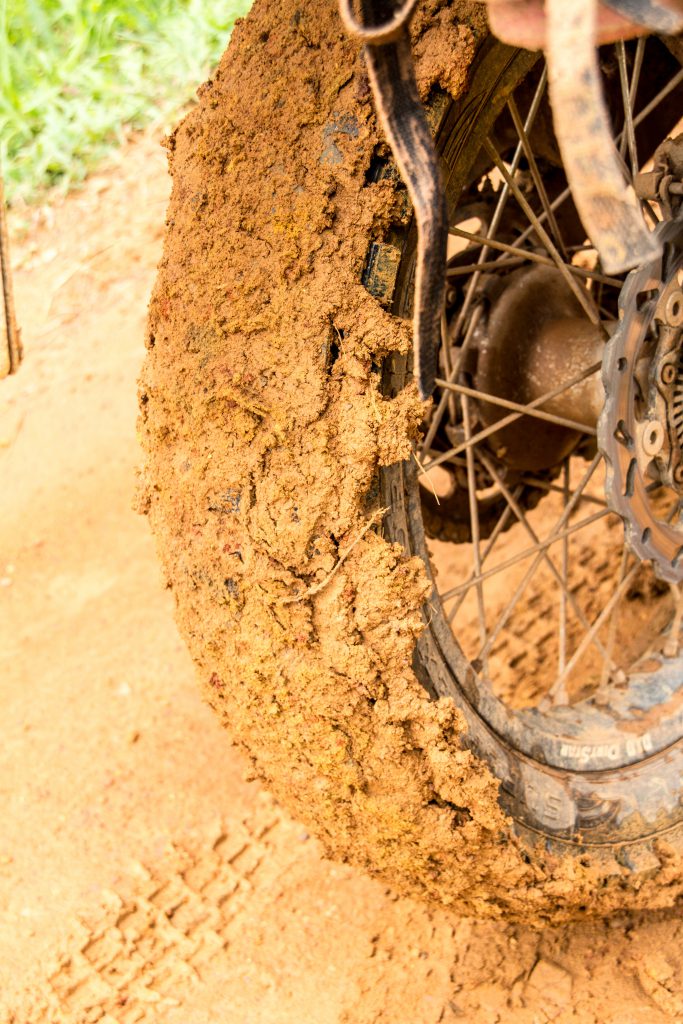 The first 20 kms weren’t too bad: a little water left and right and just a bit of slippery mud. But further down the piste we started struggling big time! Huge puddles and kilometers of thick mud had to be dealt with. The tyre knobs got filled with extremely sticky stuff and keeping the bikes upright became a hell of a job. We couldn’t but lay them on their side every now and then. And all the time, locals made us believe that after just a few kilometers, the road conditions would be a lot better. It appeared to be a long few kilometers… The rain had stopped indeed, but that also meant we were to ride the sticky slippery surface in a terribly sultry, moist heat.

Arriving in Ebolowa felt as a relief and the tar road towards the border town of Ambam finally allowed for a little more speed. But we had to ride the last 40 kms in the dark which made avoiding all the potholes a nightmare. We booked into a nice cheap little motel and took a well-deserved day off before crossing the border with Gabon. 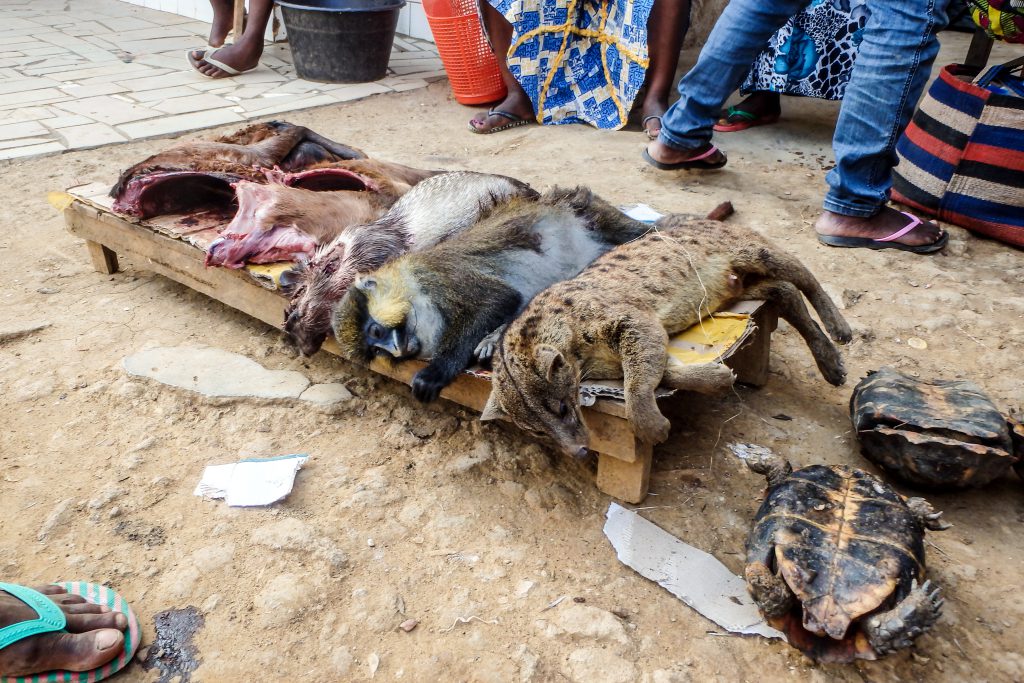 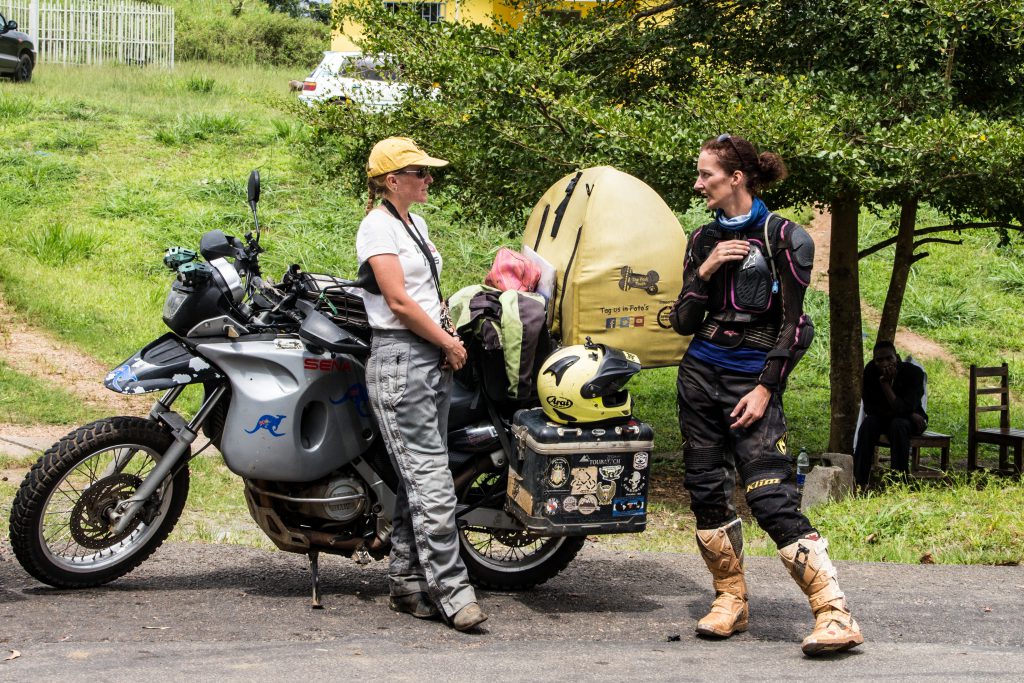 Crossing the border can be hard work

We met Stu and Janell again, two RTW bike travelers crossing Africa with their dogs. Having this nice chat with them while waiting for the painfully slow Gabonese immigration officer, made it all just a tad more bearable. Moreover they could use a little assistance with the French. Speaking the local language usually helps a lot to smooth the whole process. Stu and Janell were heading for Libreville to get their Congolese visa, while we stopped in the cosy small towns, slept in basic little motels and were sampling the local flavor. Along the road we specifically enjoyed the hundreds of kilometers of pristine rainforest as well as the endless twisties: top bikerfun! We just ran into trouble trying to get money from an ATM – banks are really scarce around here – but we made it to Mouila in the south of Gabon without major problems. 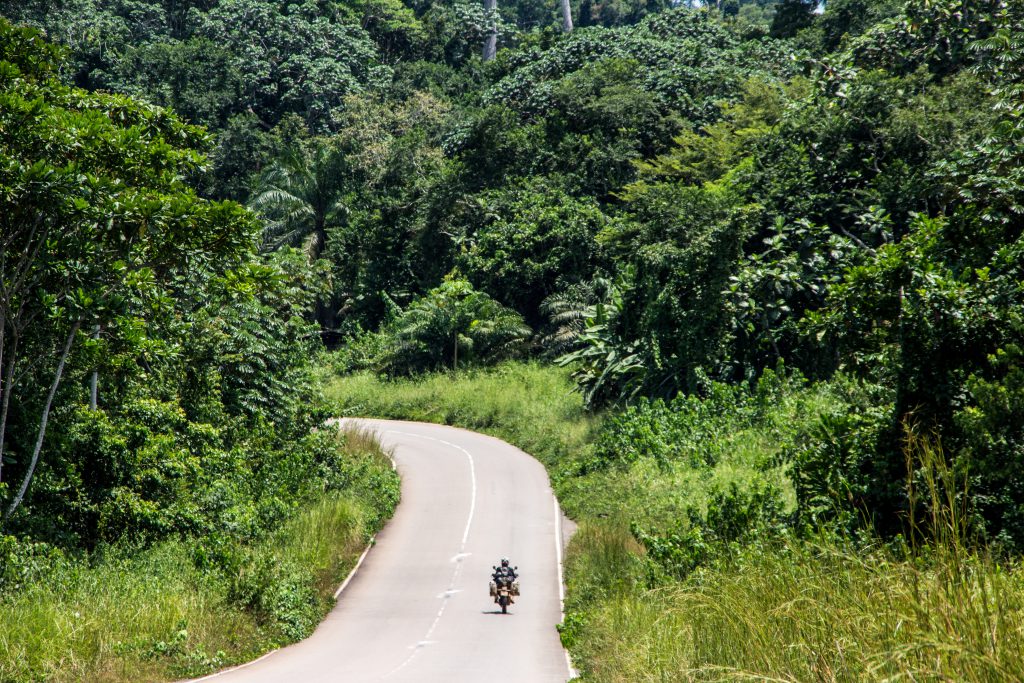 Twisties through the forest in Gabon 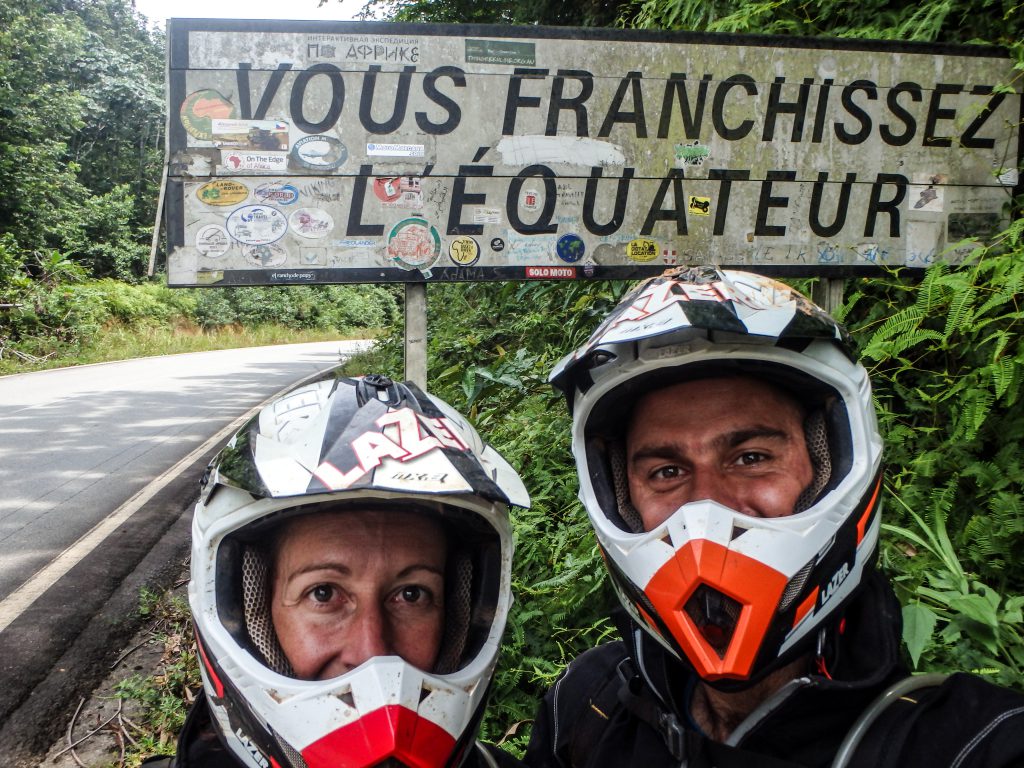 Because our Congolese visa only started two days later, we in extremis decided to ride a loop of piste leading to the province town of Tchibanga. If we were really lucky, we should be able to spot elephants along the road. Despite Carolines partially toasted clutch – a result from the inexperienced sand riding in the north – we joined the piste. The first half was a real gem. The road was winding up and down through little villages across rivers and through the woods. We didn’t meet elephants, but we really enjoyed the ride. The second half was a different ball game: about 30 kms of mud, water, deep puddles and potholes and a piste that was washed away completely at times. Temperatures that made even the locals suffer, didn’t add up to the bearability. But the reward at the end of the ride was all the greater with those few bottles of ice cold African lager in Ndendé. 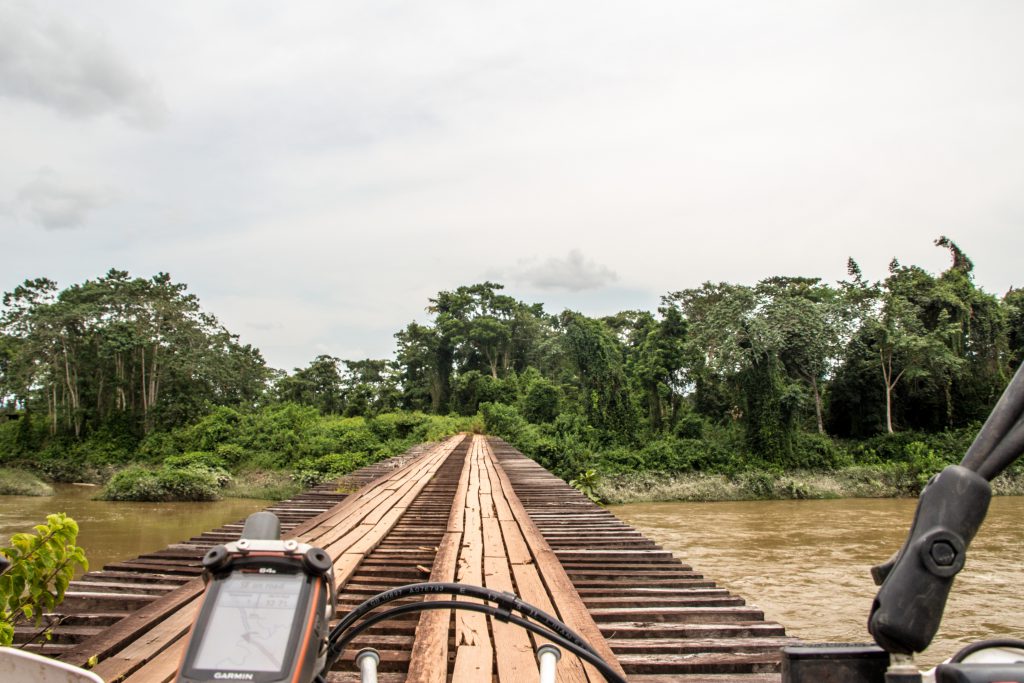 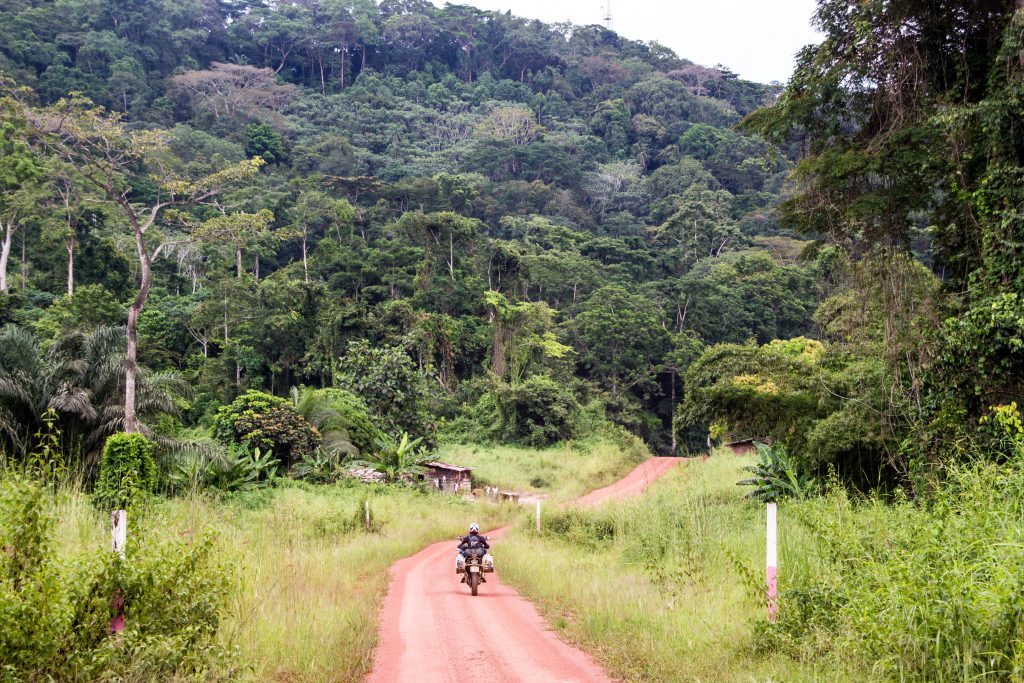 The stories we heard about the road to Congo were a bit inconsistent to say the least. Some said there would be a nice road until the border and after that some nice flat tar. Others talked about a nice gravel piste and some said they would never go that direction during the rainy season. Unfortunately the latter seemed to be pretty close to reality. Again we plunged into mud after the heavy rains during the night. The border crossing went smooth but not without having lost liters of sweat when those Congolese border officials did our paperwork at the speed of an overaged turtle. 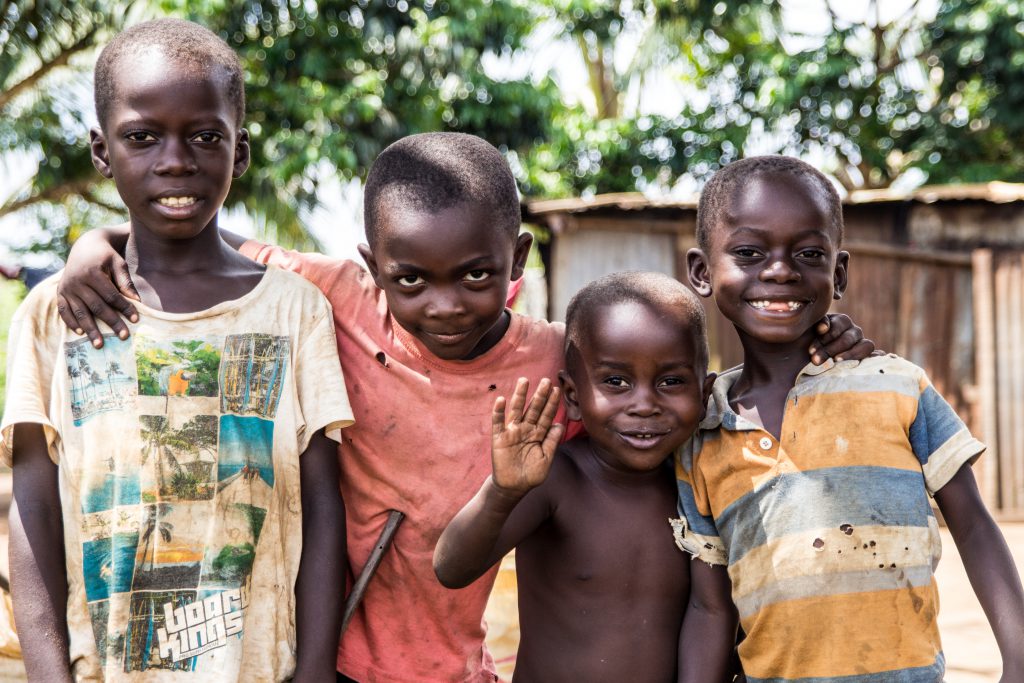 Congolese kids just across the border

But we were finally in Congo and we kind of liked it. The 230 km of piste turned into a tar road heading to Pointe Noire and that proved to be an extremely beautiful and enjoyable twisty road. I rode it pretty hard and the bike went low in the corners. But we had to pay attention for sure: diesel spill, oil patches, potholes and broken down trucks in the middle of the road. Koldo, a Spanish biker we met earlier in Ouagadougou, Burkina, knows all about it. Two days before us he crashed his bike on a diesel spill and ended up in the hospital. His bike is still in Pointe Noire, but he got repatriated to Spain to get surgery. Motorbike traveling isn’t without risk…

Pointe Noire is the place where we got new tyres and spares shipped to and where we should have a go at the Angolan visa. They appeared pretty much impossible to get hold of here, so we wer told. In the meantime our bikes got the new rubber installed just fine and the visa application was  a breeze: 30 days multiple entry! Here you go! We are having dinner at Stu and Janells tonight and tomorrow we will go explore Congo a little more. Next week we are heading further south. Angola, here we come!