Replacing a wheel bearing after a complete failure, driving the outer bearing race out using basic tools requires a bit of creativity, but it all sure is possible. Just read on…

All of a sudden, no warnings

Sometimes wheel bearings seem to last forever. Sometimes they seem to fail without a reason. I was riding a nice twisty sealed road when all of a sudden my front felt like I had a flat tyre. There was some squeeky noise as well. After quickly checking the front wheel however, the tyre seemed in perfect nick but there was a pretty noticeable amount of play between the axle and the hub. This symptom quickly made me conclude my wheel bearings were at end of life, despite them only being installed 15 kkm ago. I guess I just had bad luck. I just cannot find any other explanation. I had to ride another 30 km before being able to inspect the bearings. Needless to say the bike handled like shit.

After taking the front wheel out, this is what I did:

I put the wheel on two pieces of wood so the brake disks weren’t damaged. I took out the bearing seals with a small prey bar.

At one side of the wheel hub, the bearing looked pretty much ok. The other side however, showed me a complete bearing failure. The bearing balls, at least those that didn’t turn into shrapnell, just fell out and the inner and outer race came apart. It sure didn’t look good. 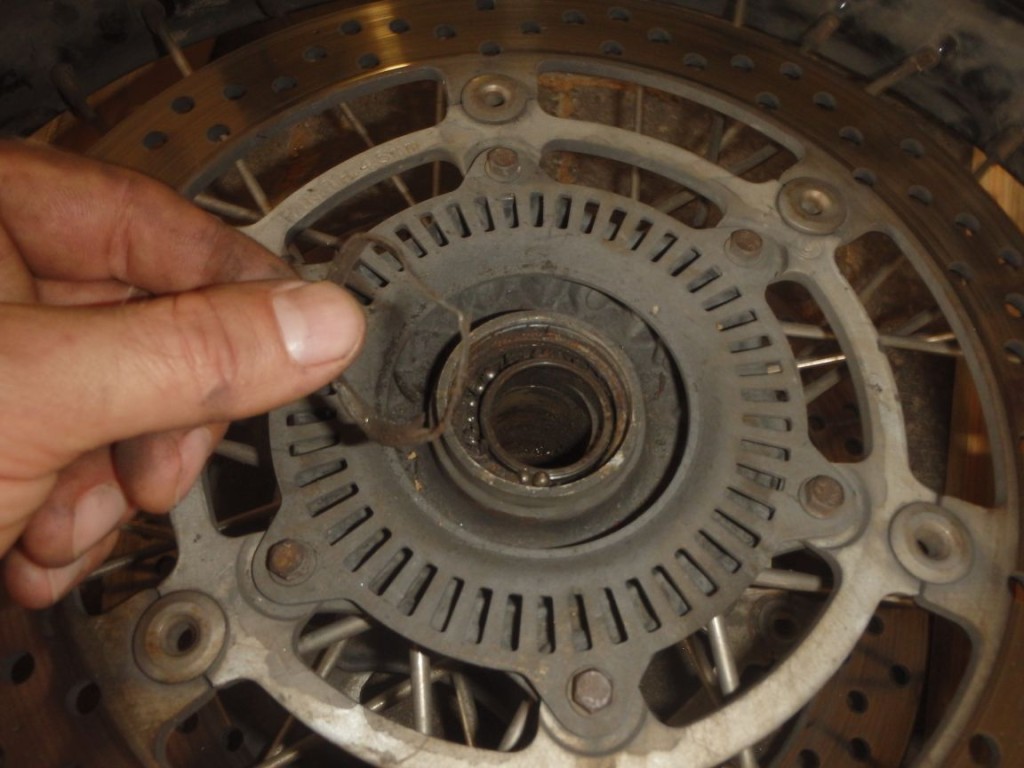 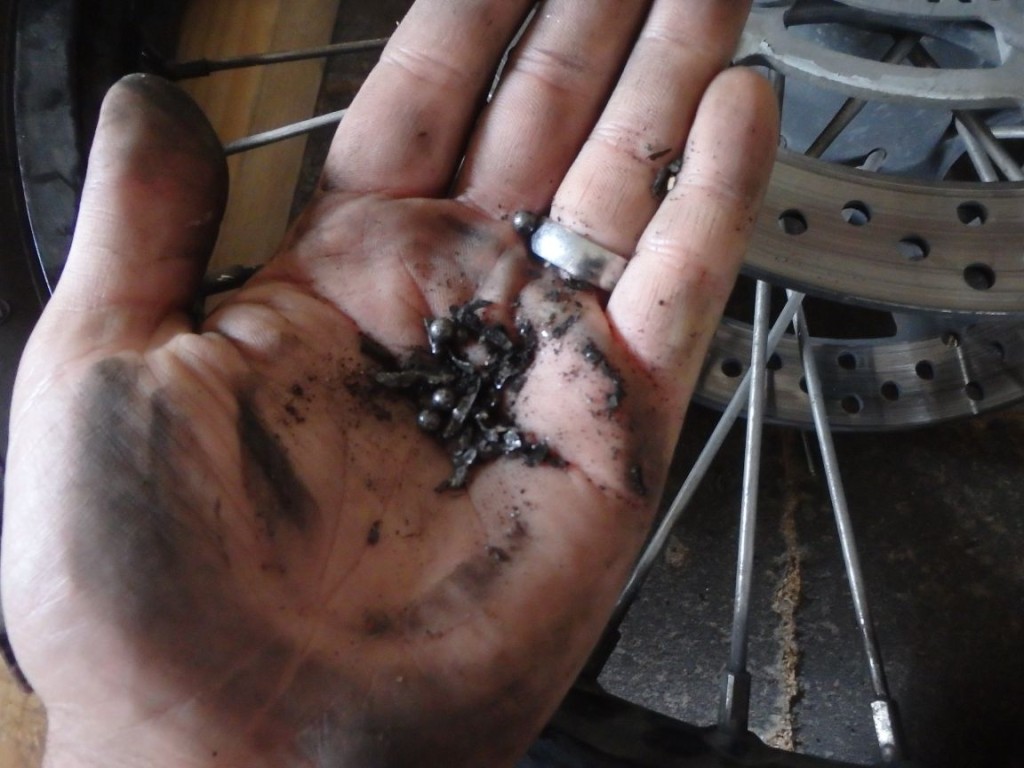 The undamaged bearing was knocked out the conventional way: I took a drift bar and from the other side of the hub, put it on the inner race of the bearing and gently tapped my way round it with a hammer. I made sure the bearing came out evenly, so better check where to tap next every once and a while. This was the easy part. 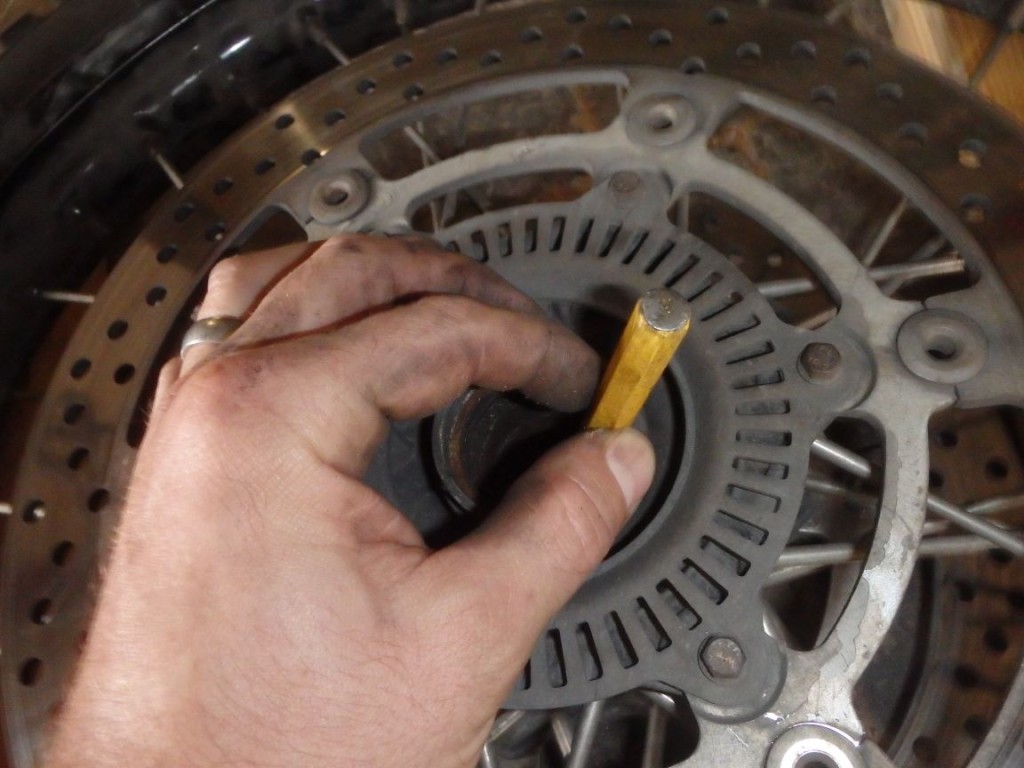 For the damaged bearing, I first had to take out the big circlip with the appropriate circlip pliers. No worries if you don’t have these at hand. A screwdriver and some sharp object will get them out as well, albeit with a tad more fiddling. 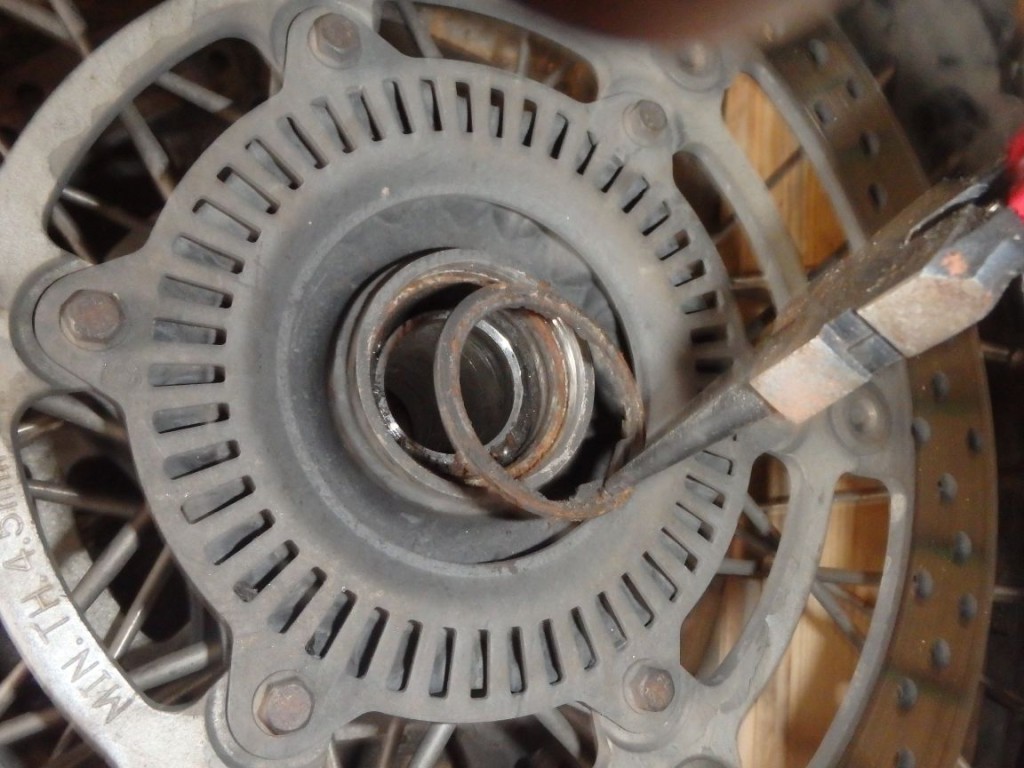 Now the real challenge: how to get the outer race out without the inner race in place? It just seemed impossible to grab onto the race surface from the other side of the hub with whatever tool I used. That’s where some creativity came in handy. First I collected the bearing balls that seemed in good condition. I only had 9 of them. Then I put the wheel in vertical position and carefully placed the 9 balls in the outer race. I then placed the inner race on the bearings and while firmly pushing the inner race onto the balls in order to keep them in place, I flipped the wheel in horizontal position. It took me three attempts because the balls kept falling out. With my thumb still on the inner race, I pushed the bearing balls with a small screwdriver so that they were evenly spread over the race circumference. Moving the wheel just a bit made the balls move around again so I decided to immobilise them with a few pieces of toilet paper. At this point, the inner race was back where it belongs and it was held in place by the 9 bearing balls. Then I flipped over the wheel and I was able to knock out the damaged bearing the conventional way. 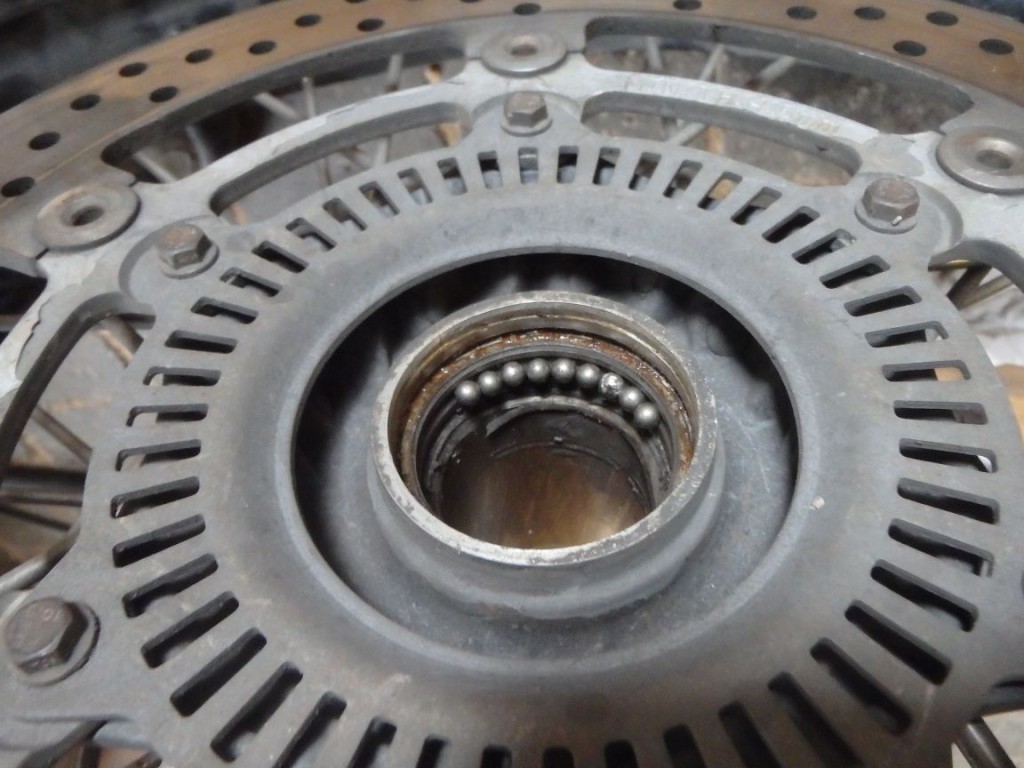 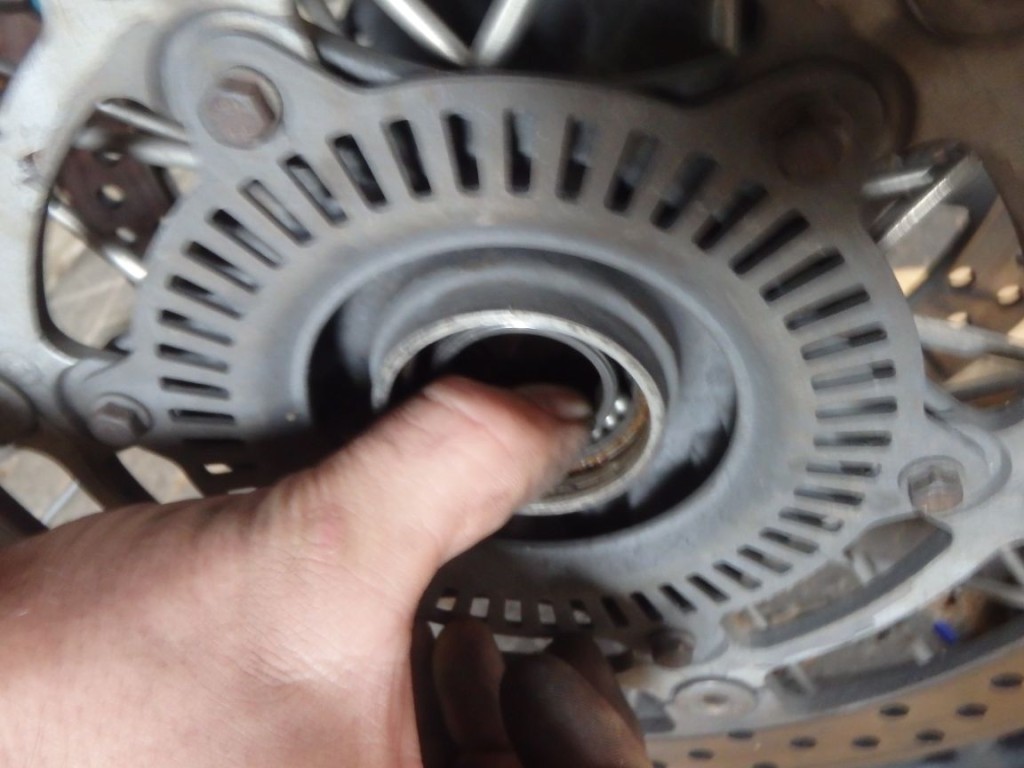 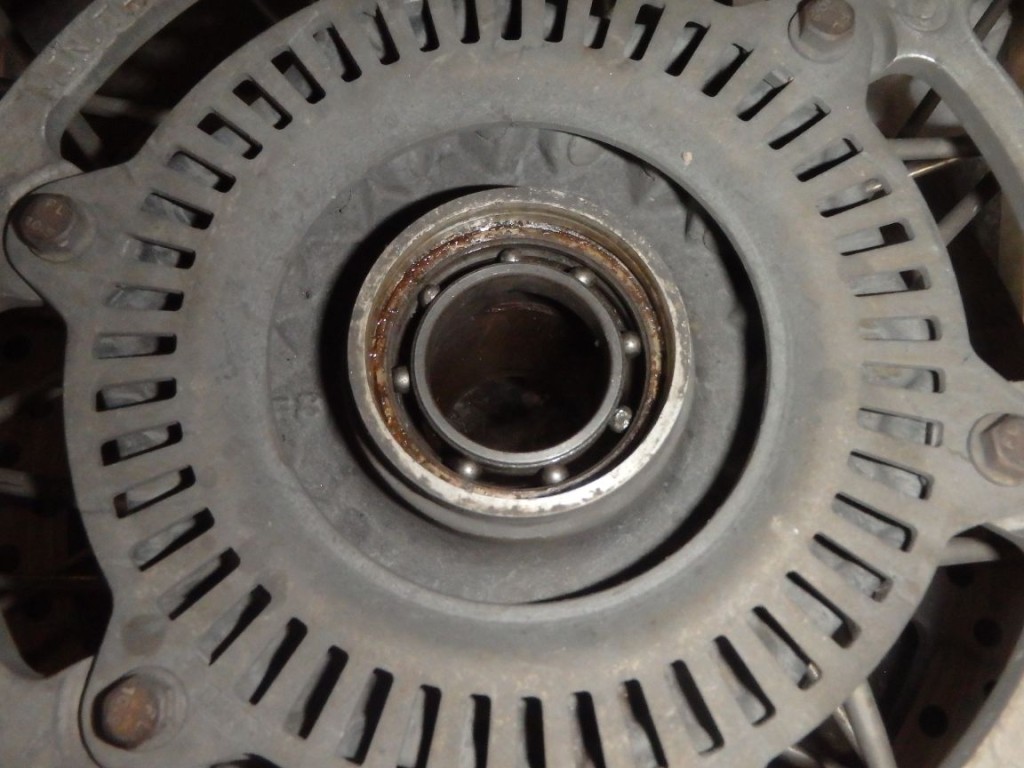 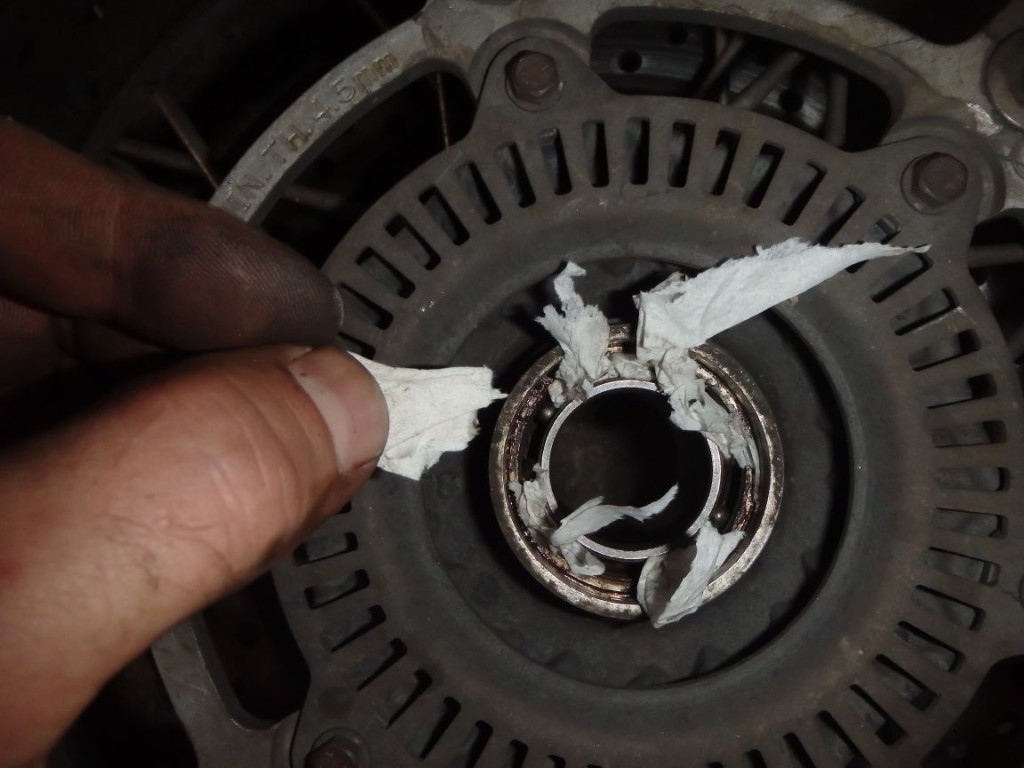 Tapping the new bearings in

Reinstalling the new bearings from here was a breeze. I sprayed a little WD40 in the hub and using a small piece of wood, I tapped my way around the outer race in order to drive the bearing in the hub, as evenly as possible. Once flush with the hub, I further used the drift bar to tap the outer race home (not the inner race). You will feel and hear when the bearing is properly seated. 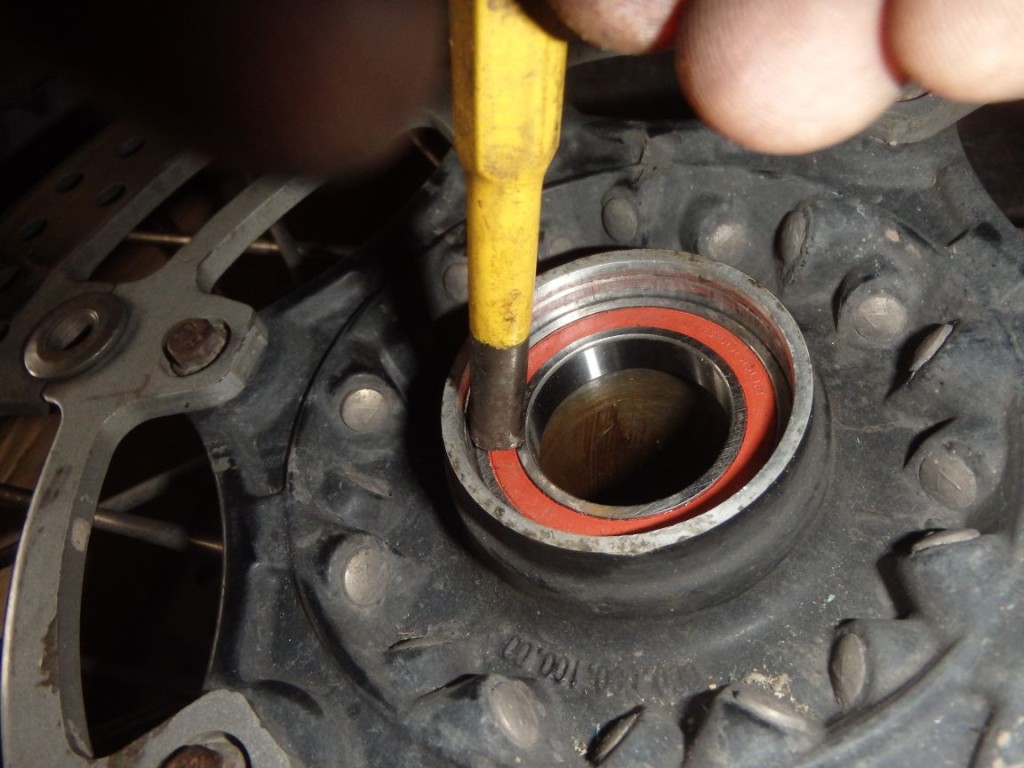 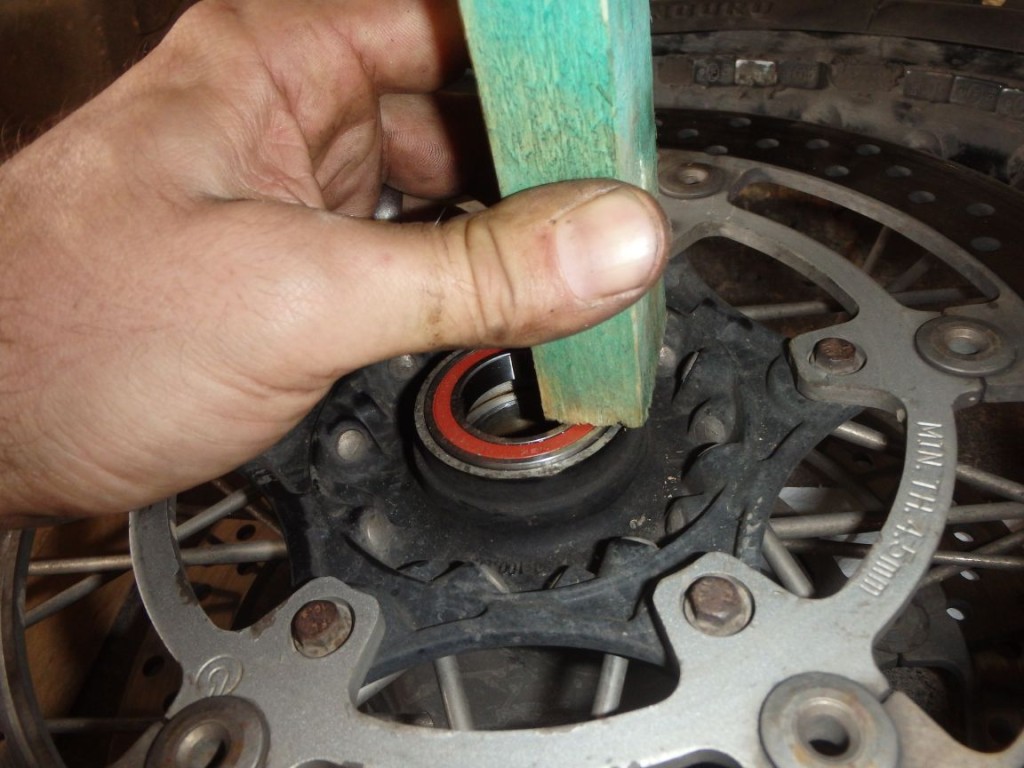 Don’t forget to reinstall the spacer before tapping in the second spacer bearing. 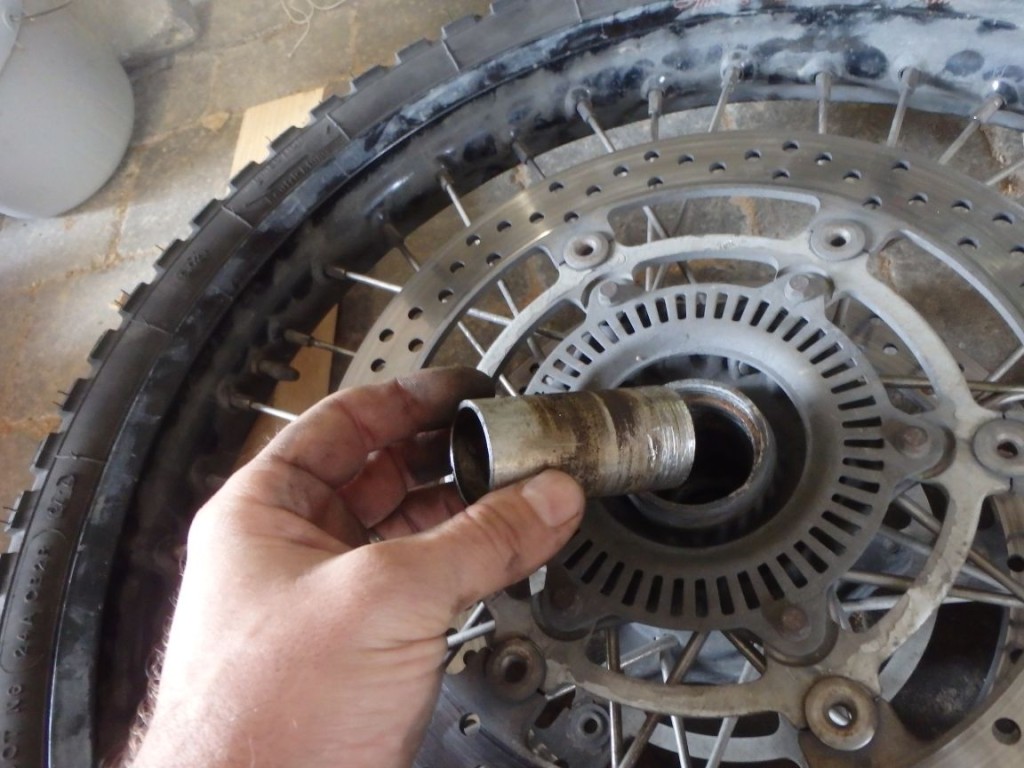 Reinstall the circlip using circlip pliers or fiddle with screwdrivers or other tools. 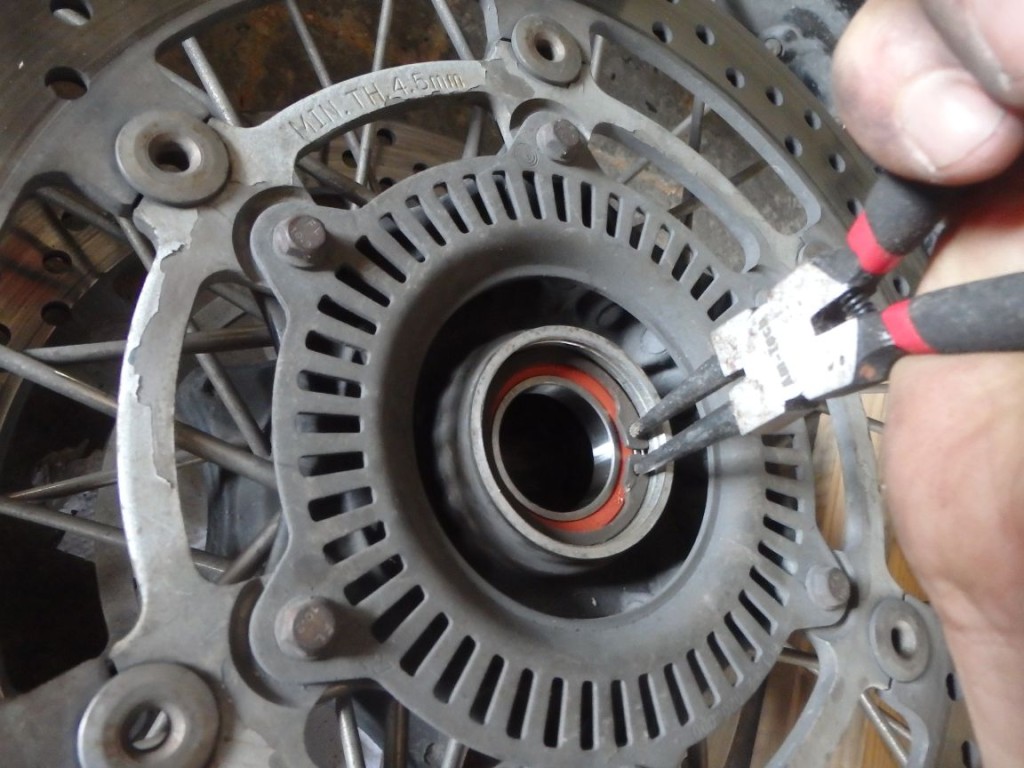 I reinstalled the  bearing seal using an old outer race I cut open with an axle grinder. I always carry one in my toolbag. 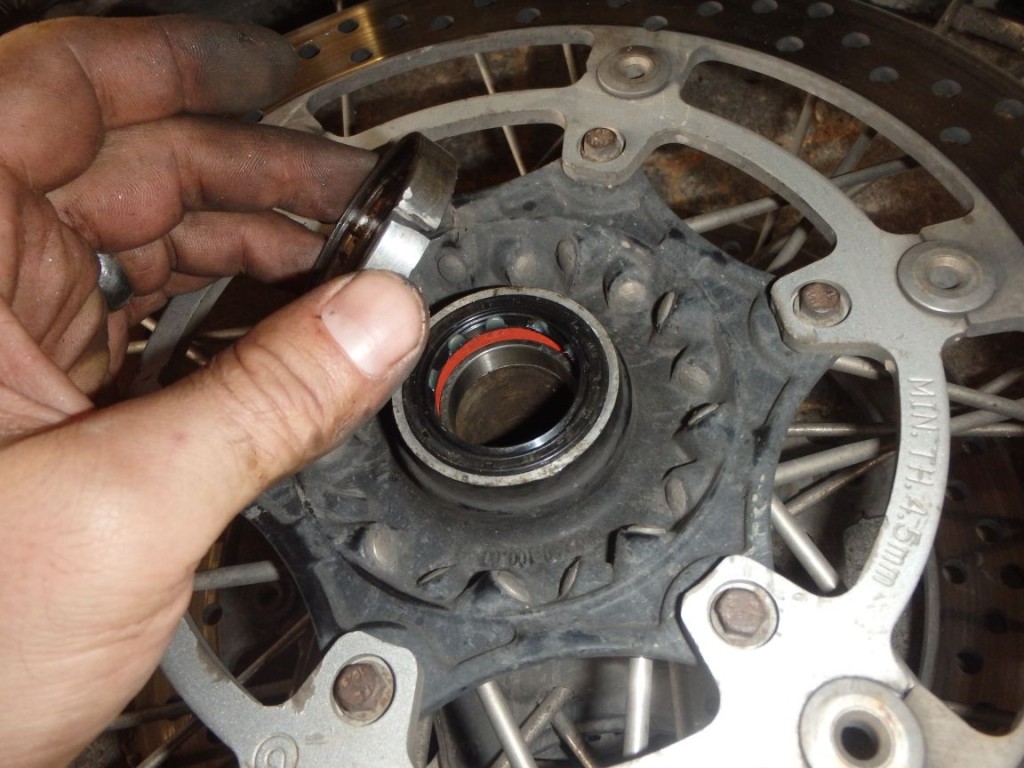 Once the seals are flush with the hub, the wheel is ready to be reinstalled into the front fork!

We hope this write up is useful for those stranded with a wheel bearing failure. Stay tuned for more MotoMorgana Roadside Repairs!