San Pedro de Atacama, a small town in the most arid region in the world, is truly amazing. It’s one of those places with a really chill atmosphere, great  people and tourists of the nicer type that enjoy telling about their adventurous travels. The many tour options around mainly focus on the breathtaking environment: geysers, lagoons, volcanoes, mountains, desert, valleys, sunrises, sunsets, stars… The list seems endeless. 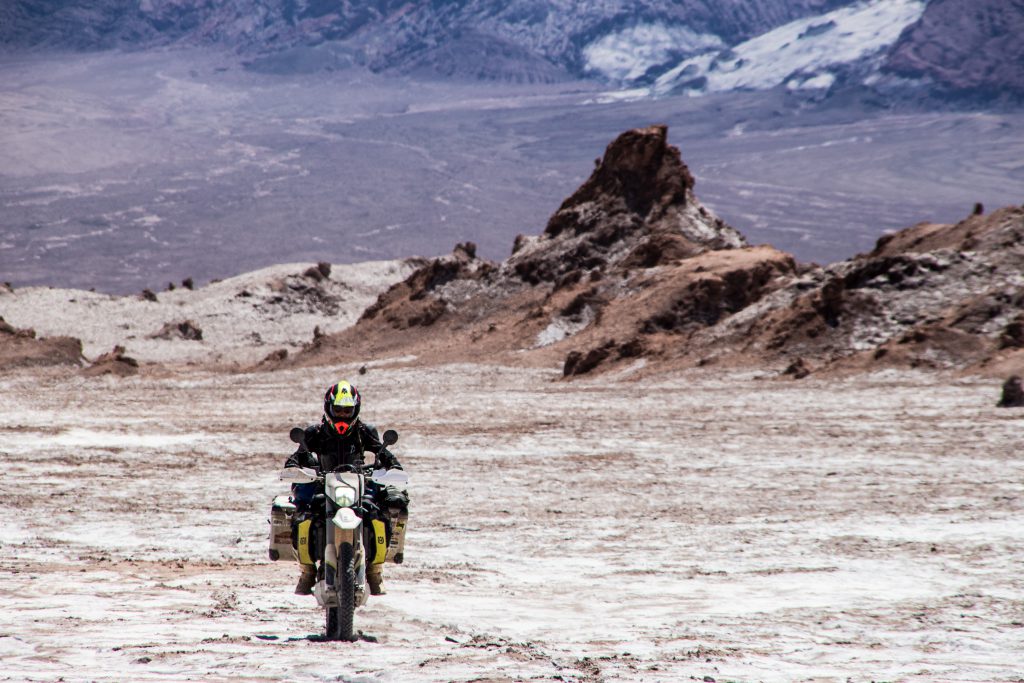 After an impressive night of looking at the stars, we ended on the moon the very next day. The Valle de la Luna does its name justice: a desolate, bumpy landscape that looks like it yet has to be discovered by mankind. From here, we worked our way up to the mountains, the deep valleys and the sandtracks leading to the even more sandy Catarpe tunnel.That this isn’t exactly my favourite riding surface isn’t really a secret. My endurance as well as Tom’s patience were challenged big time, but the environment made it all so worthwile!

Next up were the Tatio geysers, one of the tourist hotspots in the area. I have to admit that the road leading there is far more beautiful than the actual geysers though. A few clouds of fumes arising from the soil with a bunch of tourists standing around it, enthusiastically snapping hundreds of pictures.  It was all we got to see. The fact that bathing in the hot tub is forbidden nowadays due to the high cyanide levels in the water, didn’t really add to the experience. It was freaking cold in the tent with only our 3 season sleeping bag at -14!°C…

We heard some horror stories about the lagoon route in the South of Bolivia. The views would be breathtaking, but rumours went the condition of the track was horrendous. Not going there has never been an option though. This is an absolute must-see! Tom planned the route but as we discovered the main road was nothing but the worst corrugations we had ever seen, he opted for the smaller, even more remote tracks on the map. After we passed the lovely Laguna Verde and the red Laguna Colorada, we continued until the Arbol de Piedra and then turned east, over high steep mountain passes, across sandy tracks and over dunes. The Huskies felt seriously underpowered due to the altitude and the lack of oxygen and we were exhausted after we struggled big time pushing the bikes up the many dunes. We too seriously suffered lack of oxygen. 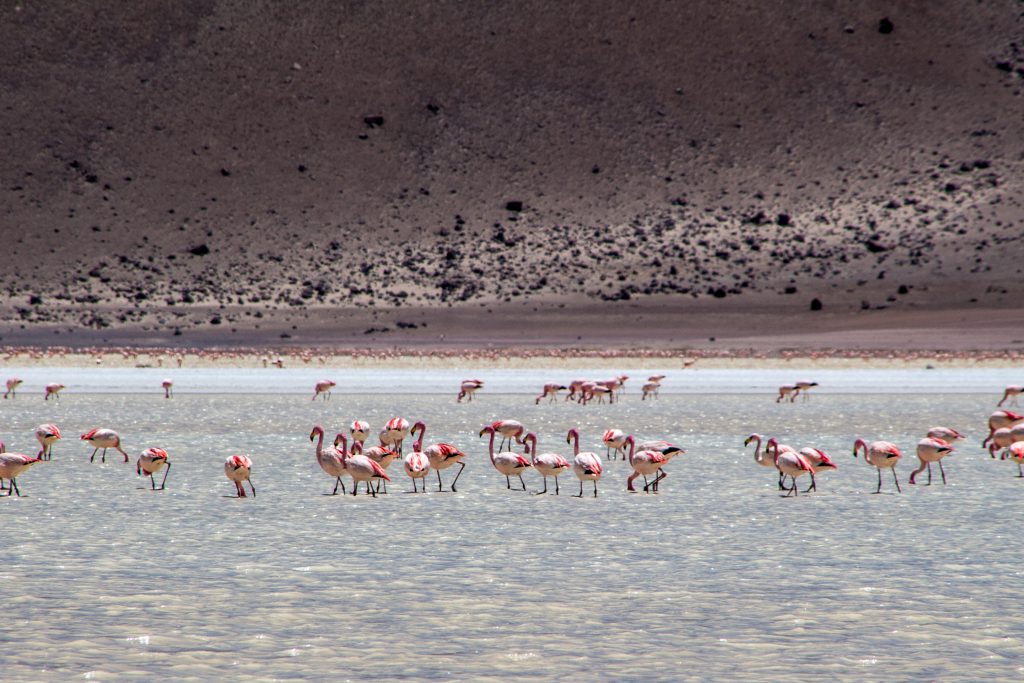 Lagoons and flamingoes all over 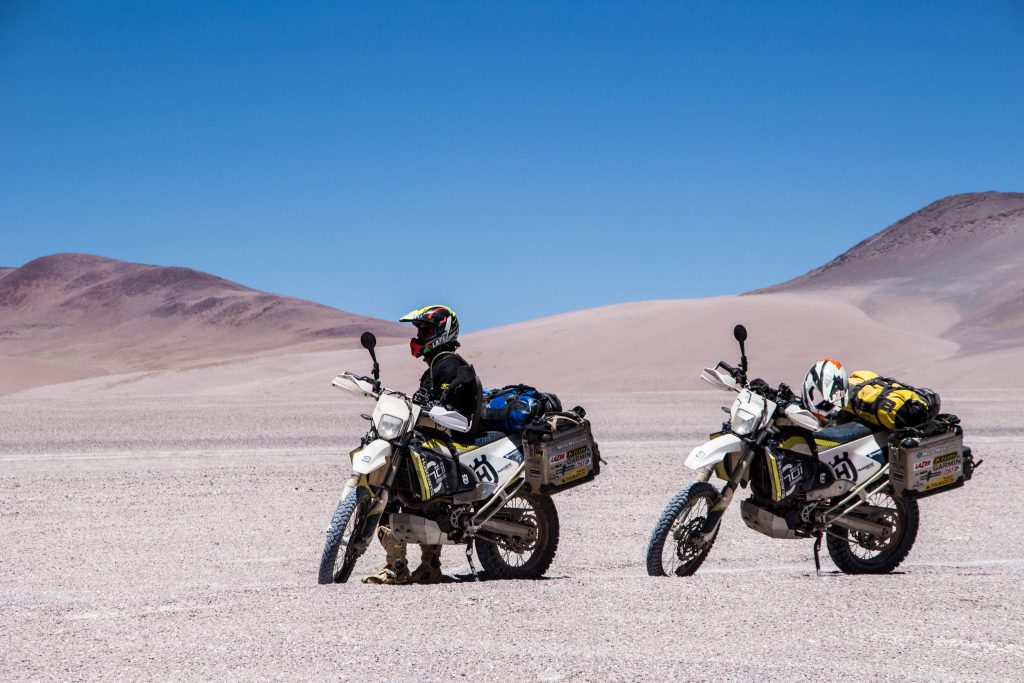 Taking a break on the lagoon route 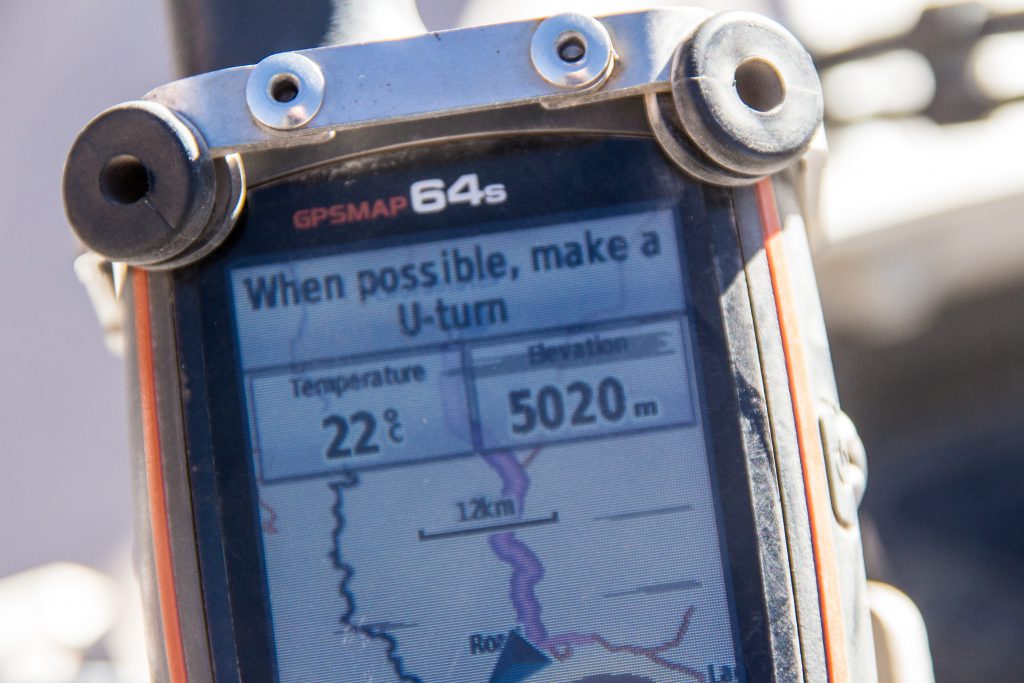 We almost didn’t see any other people on the track and that added to the whole exprience. Finding a place to sleep didn’t seem to be much of a problem. Finding food was more of a challenge though. ‘Is there a restaurant around here?’ ‘Well there is a restaurant a little further down the road, but it is closed.’ ‘Something else maybe? A bakery?’ ‘No bakeries around here.’ We felt lucky we could rely on the charity of the locals that felt so sorry for us:  they offered us free soup and an old bun. It’s been long since we enjoyed a simple meal that much!

We saw nothing but dirt tracks for three days and we won’t beat around the bush: we had quite a few fierce discussions. Admittedly traveling isn’t all rosy. My somewhat ‘easy going’ pace (read: sluggish whenever I don’t feel at ease) makes Tom nervous. And the feeling of being ‘pushed’ gave me the creaps. But we got through it and as we finally got to the Salar de Uyuni, the negative vibe just vanished. Looking around on the largest salt flat in the world makes you feel so tiny. Being able to look 100 kms far over this vast, white surface… This was one of the most impressive experiences I have ever had. Tears  came to my eyes and not because of a fight with Tom this time. Goosebumps! So worth it! 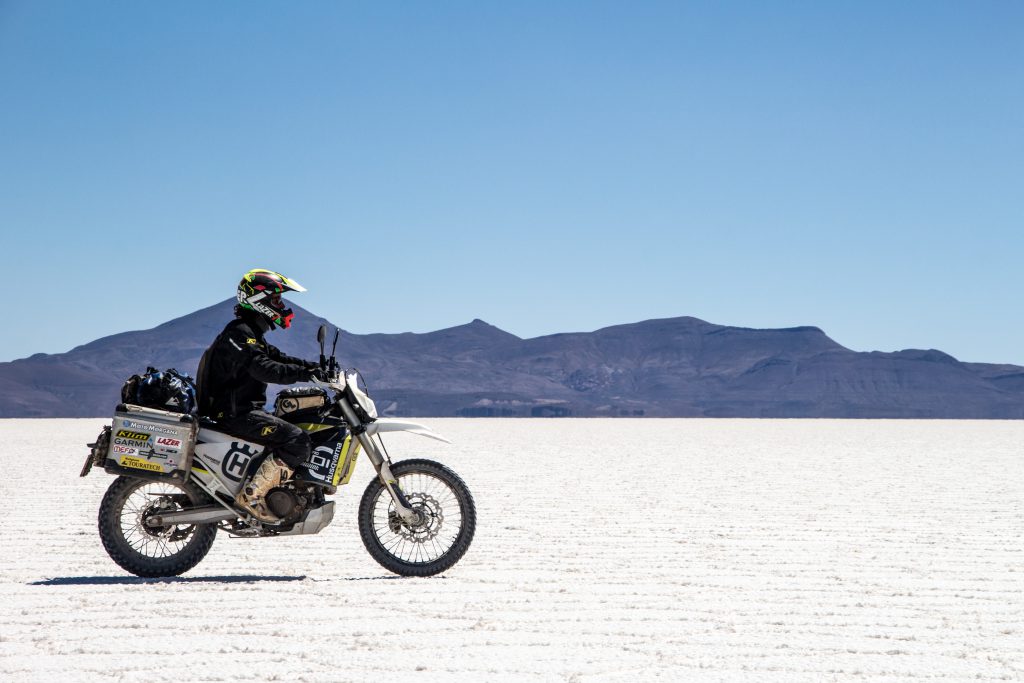 Caroline on the salar 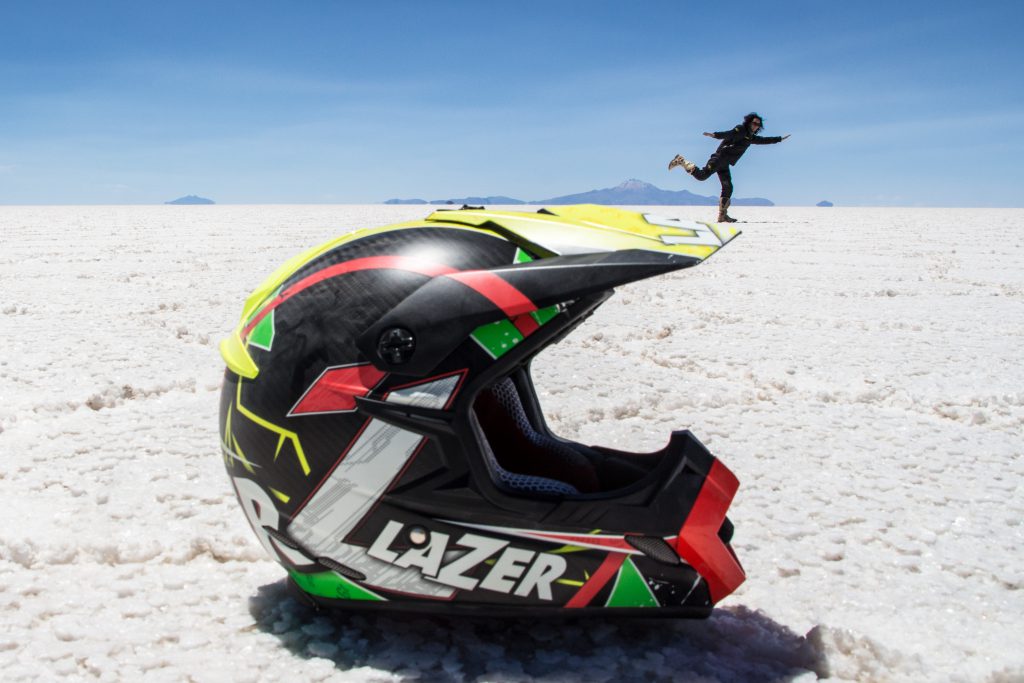 We bumped into this giant helmet… 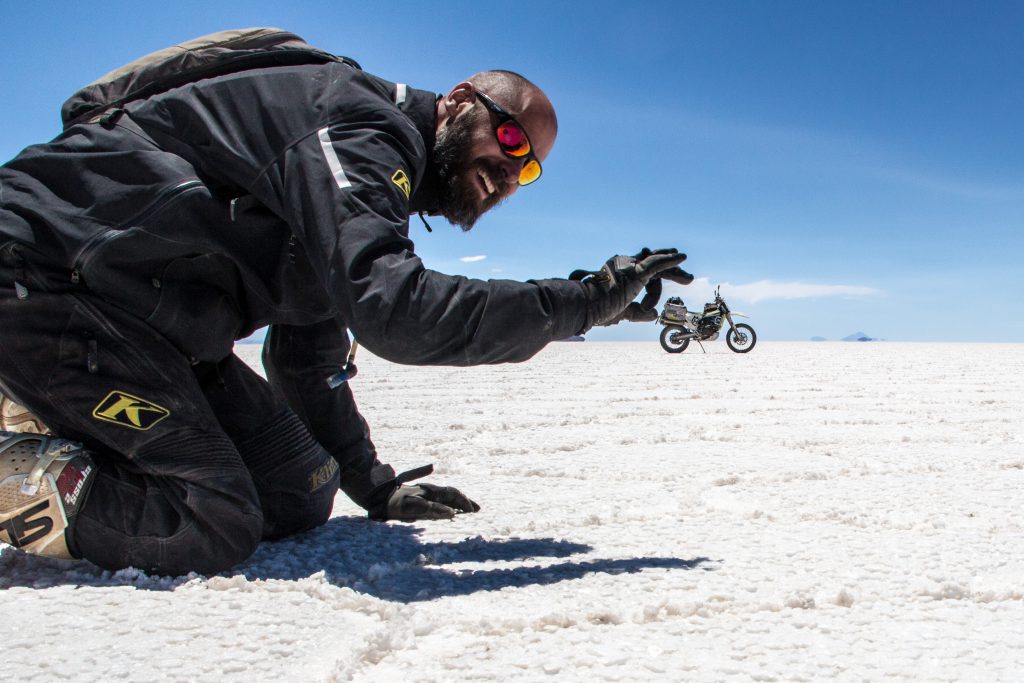 …and into this mini motorbike

Uyuni was a great surprise as well: after a few days of – again – tuna and salchipapa (fries and weeners), we were submerged in luxury. We had pisco sour and pizza, I started drooling in front of the window full of skin care products and we found a cheap room with a great breakfast ànd toilet paper. It’s kind of weird what traveling can do to one: we start appreciating the most simple things a whole lot more!