Colombia is definitely our second most favourite country in South America, right behind Bolivia. But the first encounter with the country wasn’t the easiest one. That we have to foresee enough time to cross a border, now that, we knew all too well. We usually take about half a day for a border crossing, hoping we won’t need all that time. The border in Ipiales wasn’t exactly the most complicated one, but the waiting queues were endless. That means waiting for hours until they stamp your paperwork in less than a minute. But I like watching people and I rather consider such situations as an opportunity to practice my languages J. But once we finally crossed the border, it started pouring down. During that first week in Colombia, torrential rains would become a daily tradition. ‘Today it won’t be much, for sure’, Tom kept on saying, after which we decided not to put on our rain pants to find ourselves soaked in less than half an hour, over and over again… 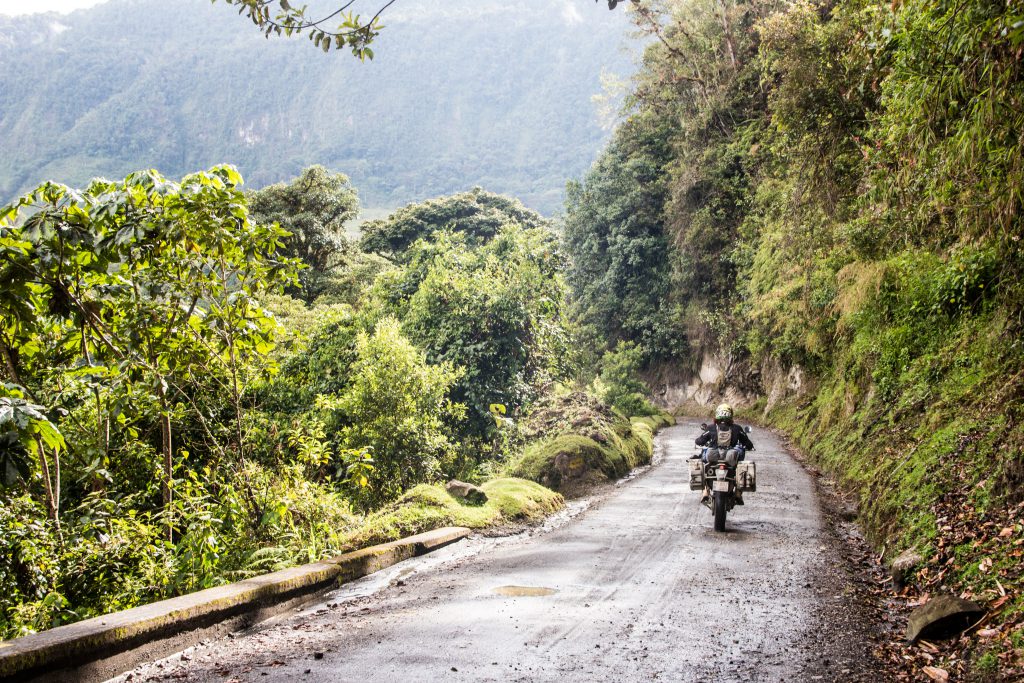 in between the downpours, Colombia is an awesome ride 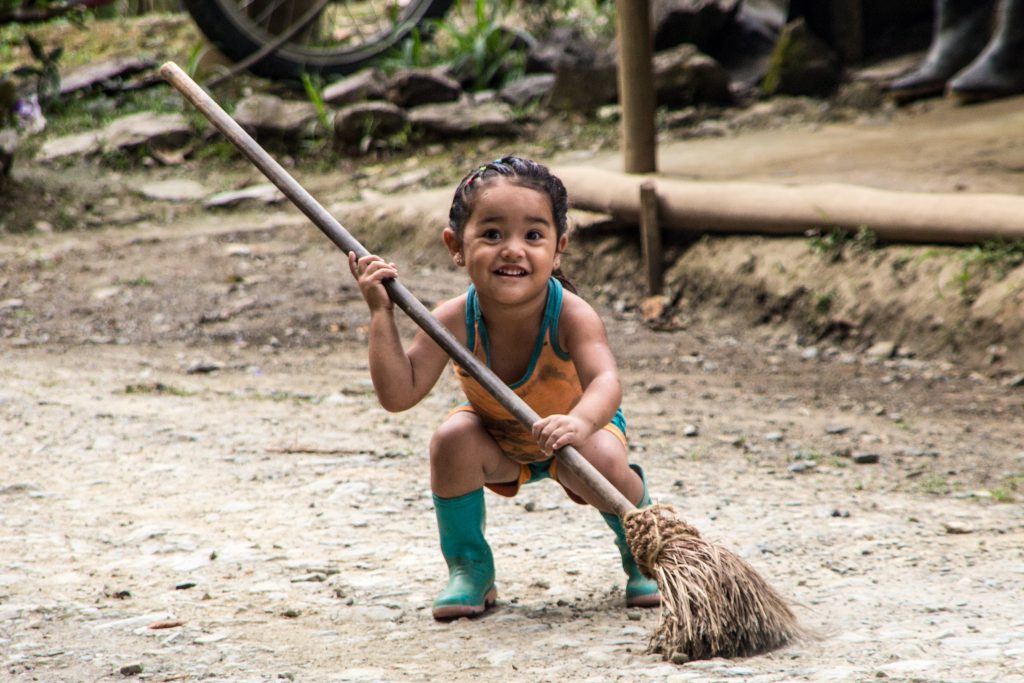 The first stop in Pasto was a bit special to say the least. We spent the night in a cheap hostel right across the red light district. Only, most of the ladies weren’t really born as such.  A deep, male like voice tried to draw Tom’s attention:  ‘high honey, let’s have some fun’… But the locals were crazy friendly here: lovely chats, curious faces, having a look at the cool bikes once more…

And Colombia is off road nirvana. Lovely tracks took us to even more lovely places. San Agustín was one of those spots, albeit a little touristy too because of the historic site. But it was more like the amazing street food – with veggies for once – that surprised us in a positive way. From there, we worked our way up to the Tatacoa desert, with its amazing erosion shaped landscapes. I wouldn’t exactly compare it to the Sahara desert, but it had all we love so much on the track: rocks and sand! 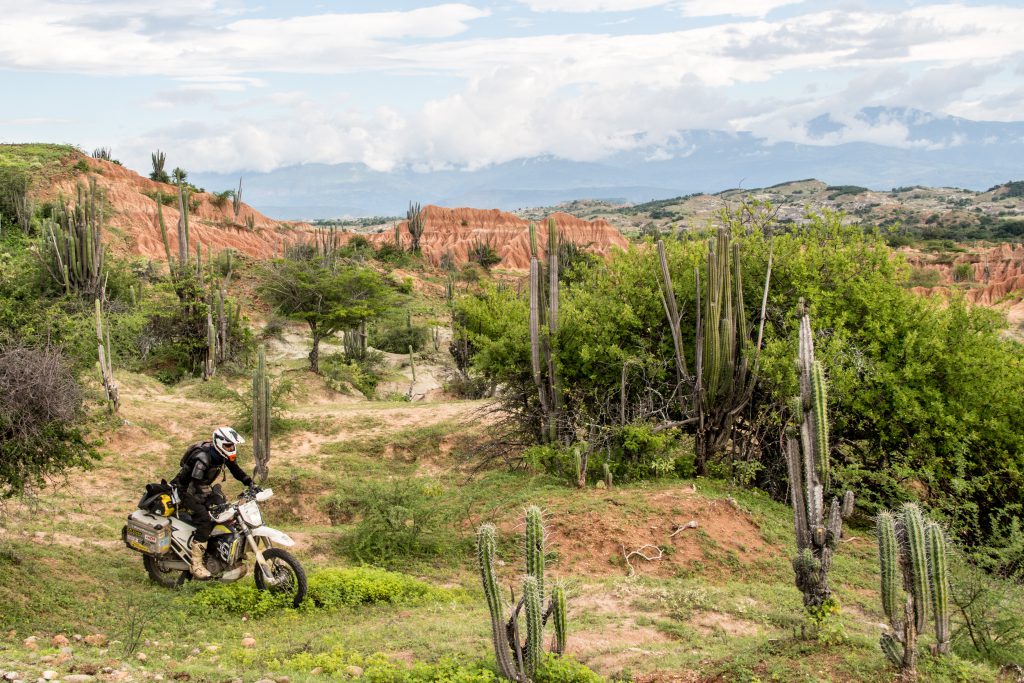 In Villavicencio we had an appointment for an interview with Esteban, a Colombian Duchenne patient, and his parents. If it weren’t for Esteban, we would probably never have made it to that big city. It wasn’t exactly on our route. But nevertheless, Villavicencio was quite an experience: the town was ‘pool crazy’ and counted more pool tables than the whole of Belgium for sure. And our new friends proudly showed us the nicest spots in town.

But the tracks to Medellin called. We worked our way west along the unexpectedly nice Chiquinquirá and chose for the more remote areas to travel, without any foreign tourists. It is a lovely feeling when people give you thumbs up just because you chose their village to ride through.

Medellin is different: it’s crowded, busy, full of lovely artistic graffiti and you’ll find all you need in the once most dangerous city of Colombia. We got a top hostel right outside the tourist area and got in touch with Moritz, a German traveler. It took him about half a day of listening to our travel stories  before he promptly decided  to get a bike as well and to continue his trip on two wheels. Tom was his ideal guide to help him with choosing the right bike and luckily he accepted the help or he would have bought the first bike he saw, held together with sticky tape. Enthusiasm makes blind at times… 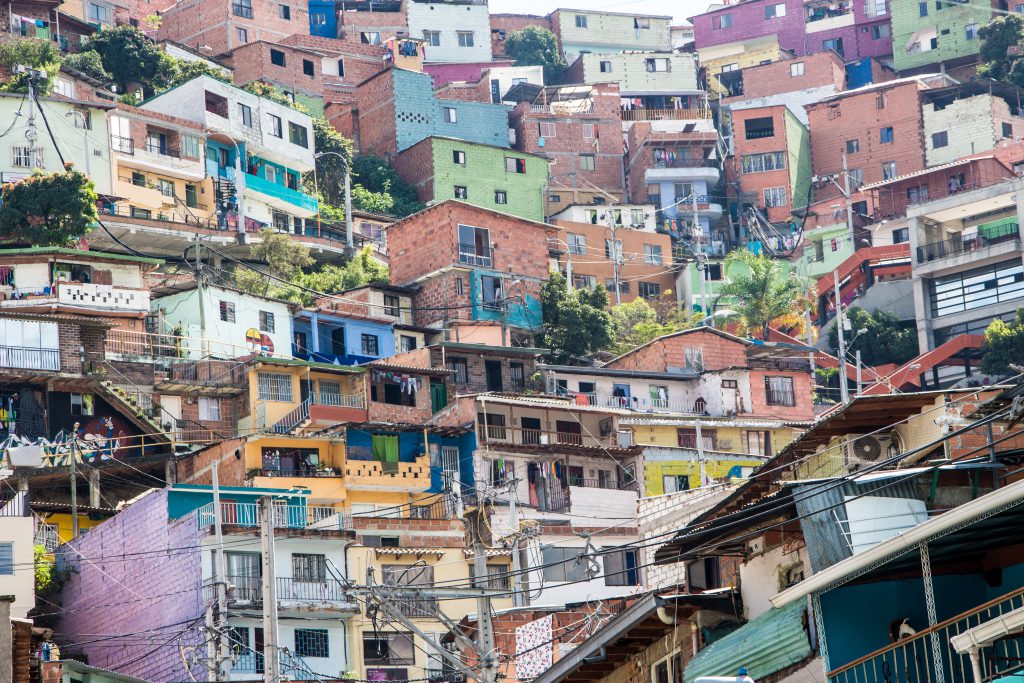 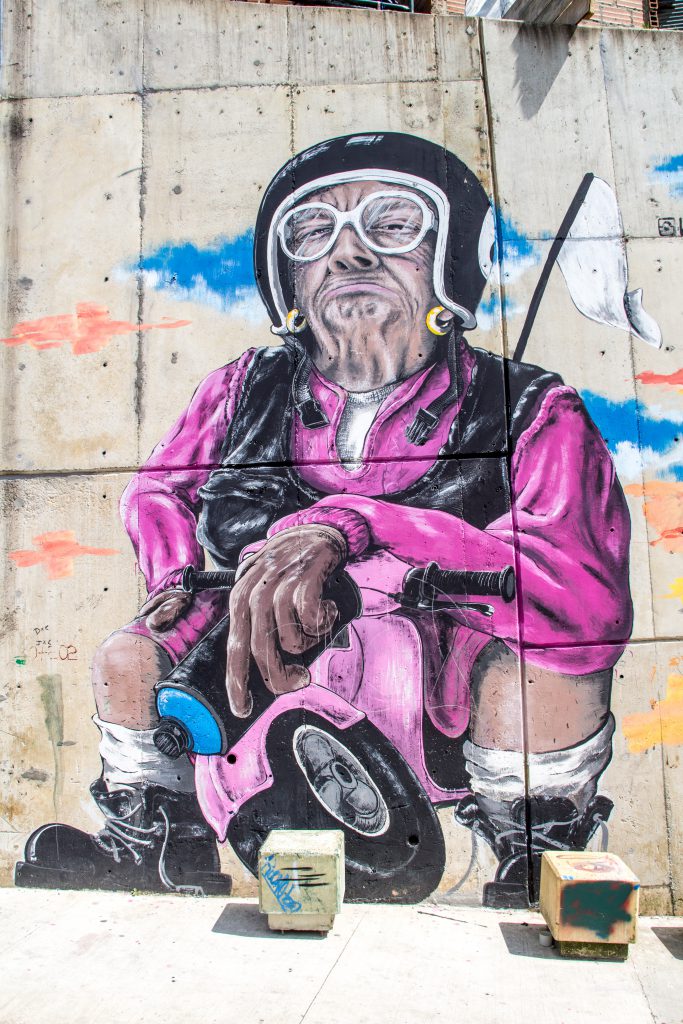 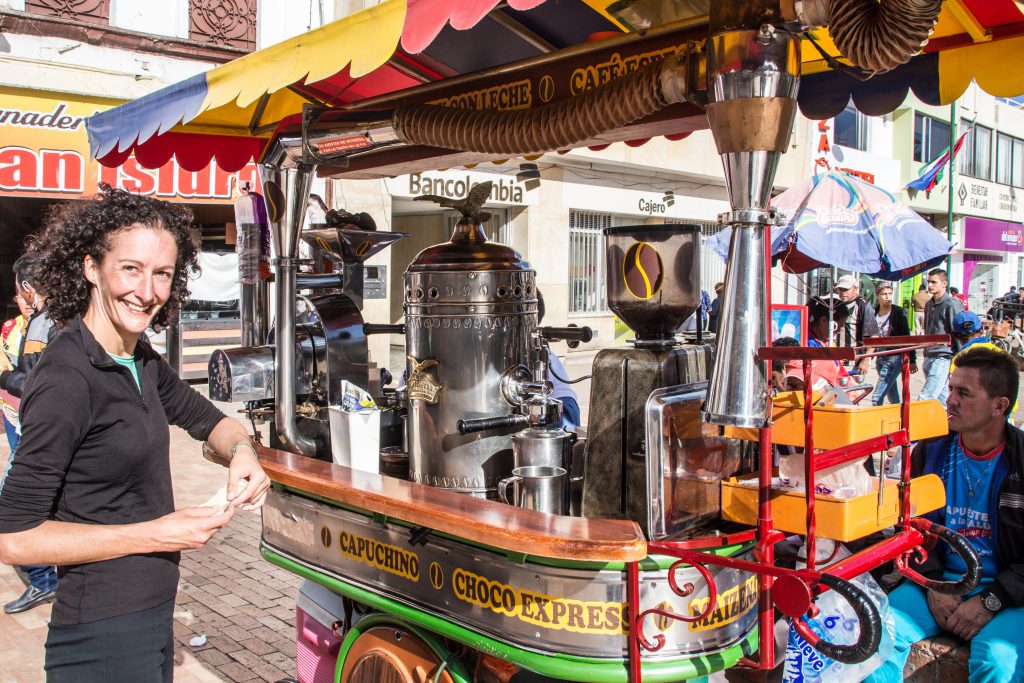 For once it wasn’t Tom but myself choosing the tracks direction  north. I decided to follow the grey dotted lines on the map, despite the lack of information on the web or with the locals. I must admit, I learned from the master and  we didn’t regret our choice: the tracks were great fun and quite challenging at times. We even found a top mechanic who fixed our broken bolts from our luggage rack in some remote little town. 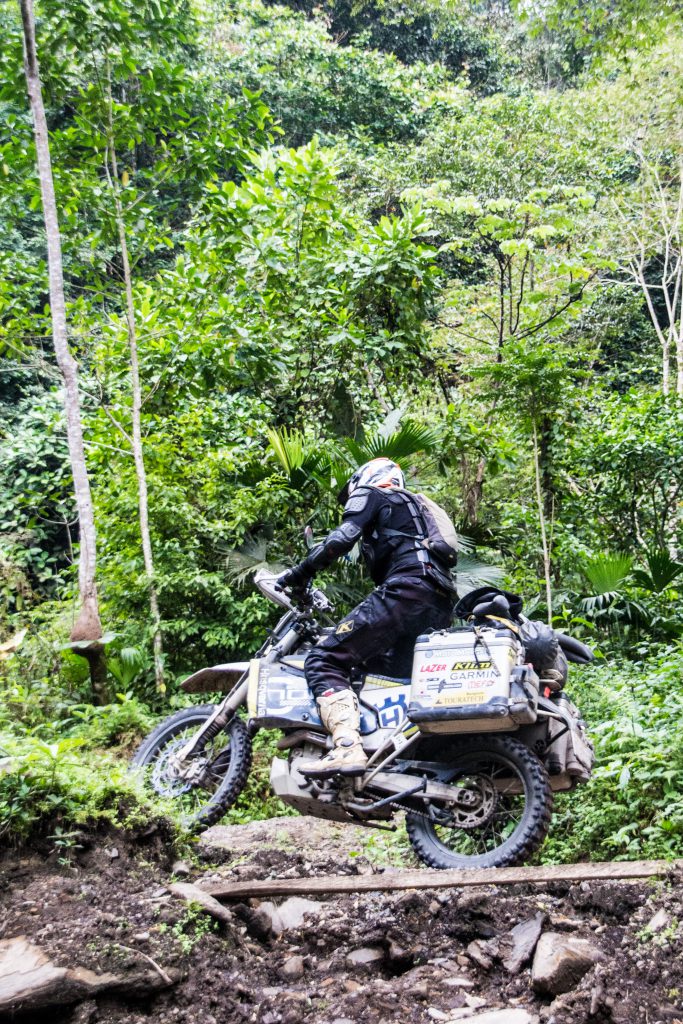 The tracks got a bit challenging at times

Our final stop in Colombia was Cartagena from where we decided to ship our bikes to Panama. Three full weeks we spent with Max and his crazy hospitable family. They took good care of us, prepared food, washed our clothes etc, while we were busy shipping the bikes and sorting the paperwork. Honestly? I almost shed a tear when saying goodbye. For the first time since the beginning of our trip, I had that family feeling I will never forget! 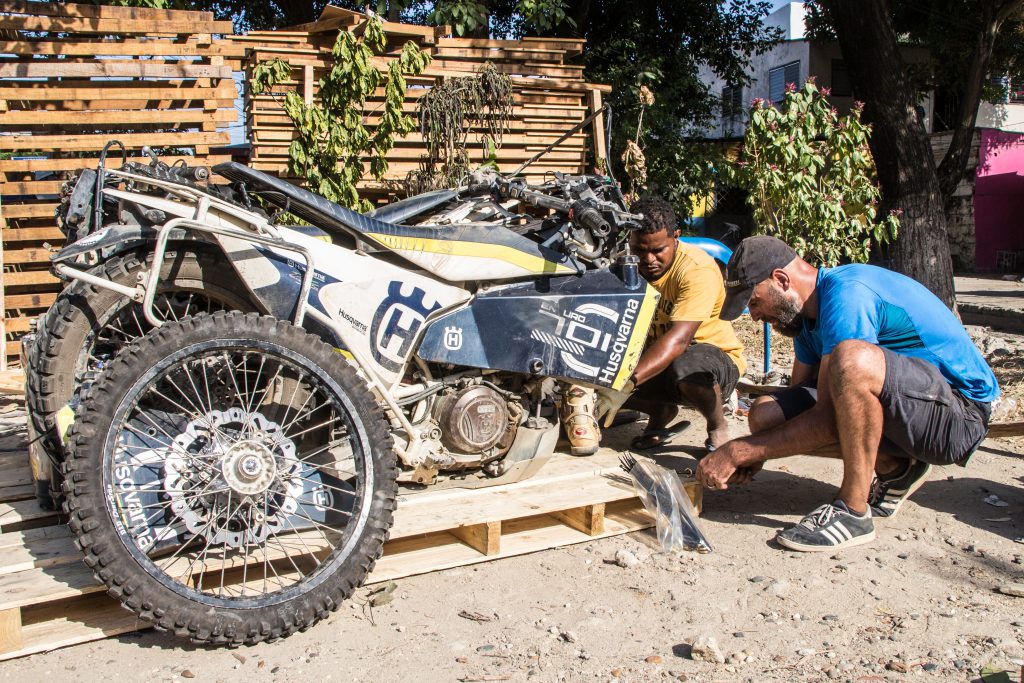 Packing the bikes in Cartagena 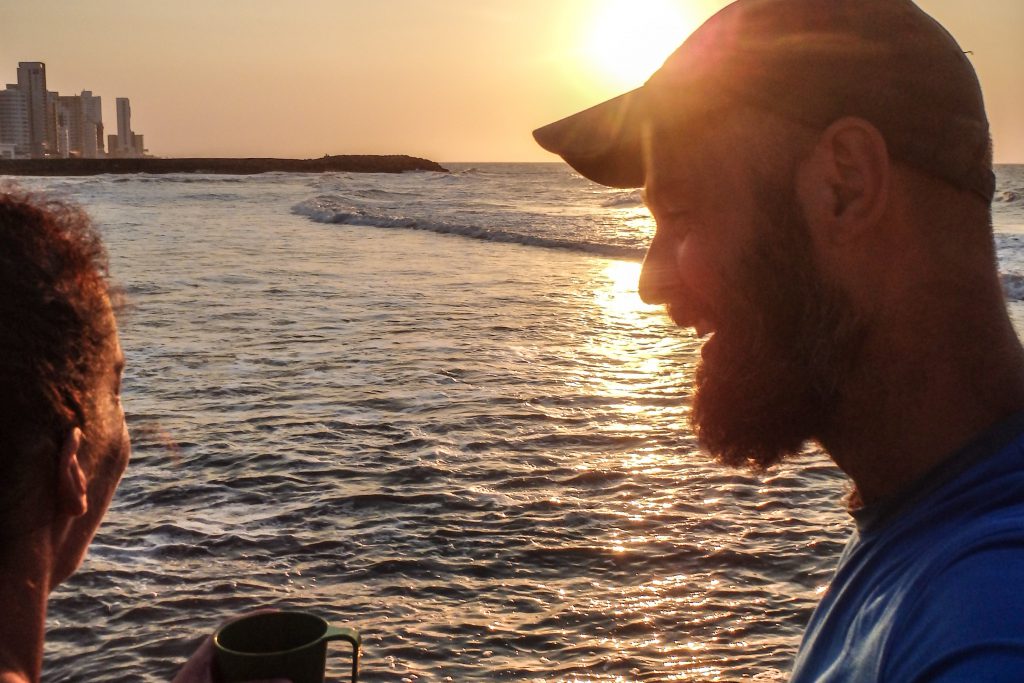