Hi, I am Tom De Mits, a Belgian motorbike adventure traveller and freelance journalist. I was born back in 1973. Ever since I was a kid, I always fancied motorbikes, but it was my father telling me I could better buy a coffin rather than to ever ride motorbikes. It was cheaper and had the same result so he said. You know, parents tend to be a little protective over their offspring sometimes, even to the extent that childhood dreams get buried away. Although I had a grand uncle who ever so often came showing off his new bike. I still remember the rumbling sound of those shiny, brightly colored machines. Lovely it was, but unfortunately it never seemed to hit a string with my parents.

How the travel bug got me

I was merely 16 when I started backpacking and I still remember those bikes on the ferry from Southern Italy to Greece. I couldn’t get my eyes off of them. Those tough guys in sweaty leathers. They were the true adventurers. I knew that once on my own feet, I would be doing the very same thing. Travel and ride, discover new countries and most importantly enjoy the freedom.

When I started working, it didn’t take long before I was sent to, let’s call it the more challenging of work environments. I started working as a management consultant for a petrol exploration company in Congo and Angola and later I was doing project work in Eastern Europe. It wasn’t too long after the fall of the Berlin wall so living standards were not comparable to what I was used to in western Europe. But it made it all so much more interesting. I was heavily  bitten by the adventure bug so it seems.

It wasn’t until my early 30’s that I finally decided to get my first bike. That very same grand uncle told me that if I wanted to travel with my bike, I needed a BMW GSA so that’s what I got. Later on I would discover there were better bikes that suited my way of traveling better, but that first bike took me to quite a few places: Morocco, South America and later, after I met Caroline, we rode from Brussels to the Middle East and back. And I wanted more, much more. Ever since my first trip on that bike to Morocco, I started dreaming of a round the world trip and when I met Caroline, I was ever so glad she got into adventure biking as well.

Ready for the real stuff

Every year we used to do a major trip. We went to Namibia, South Africa, Iceland, Iran, Northern Africa, Turkey… And we both liked it more and more. I kind of ended up in a situation where I was preparing for the next trip for 11 months rather than letting it go for a while and focusing on other things. I think that calls for a change, for a major project, for a drastic shift in professional orientation. So here I am, together with my lovely partner Caroline, ready to leave on a 5 years round the world adventure with the bike as my new workplace! 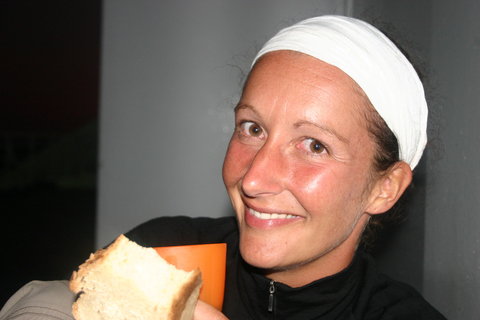 I am Caroline, born in 1980 in the vibrant student town called Leuven. I grew up with my 3 wonderful brothers and despite the fact that I used to play with dolls, I have always had a bit of a tough side too. I have always known pretty well what I wanted and tried my very best to achieve that. That’s how I realised my biggest childhood dream by becoming an enthusiastic teacher, by teaching kids what they really need in life. As of today I am still convinced this is one of the most lovely professions in the world!

Why a round the world trip?

I have a very curious nature. Curious for the life of others, their ideas, their feelings. Curious for their deepest secrets too. During this trip, I want to learn to understand the world of other people and at the same time tell them about mine.

I just love it to experience new situations and environments, to discover remote places and to do things I have never done before. I love it to be immersed in new cultures that are very different from mine, to discover new foods, to meet new people and to discuss with them about what keeps me and them busy…

Why on a motorbike?

When I met Tom, he just got back from a trip through South America. The way he told me about his adventures, the passion in his travel stories, just left me with an instant crush on him. This is what I wanted as well! I had never ridden a bike before but it didn’t take long before there was a shiny BMW 650 Dakar sitting in the garage and Tom arranged for my first riding classes. That very same year we left on our first riding adventure together: A trip to the south of Jordan and back accounting for  11000 kms. I had hardly ever ridden more than 200 kms in one day and my permit was exactly two weeks old on the day we left. Needless to say this trip was a major challenge for me, but I knew this was my thing. Many long trips followed…

I especially fancy motorbike travelling because of the many impressions you get along the road. You can hear, smell, feel almost everything: the raindrops making you wet, the warmth of the sun, the smell of flowers or animals at the roadside and the many breathtaking views… Wonderful!

Leaving material things behind isn’t really hard for me. Even my inseperable high heels can be missed, no problem. Saying goodbye to friends and family, that is going to be the tough part! Nowadays there’s many options to keep in touch with the homebase, but the physical presence, the hugs, the feeling of security… I’ll have to do without. I just hope they’ll realise I will think of them a whole lot.

I also hope my firends and family will understand that this trip will make me better, richer. I have reached a point in life where I have to let go on the ordinary life, where I have to do something else. I am ready for it! And that little bit of vertigo and lack of sense of orientation? I will work on that along the road! 😉